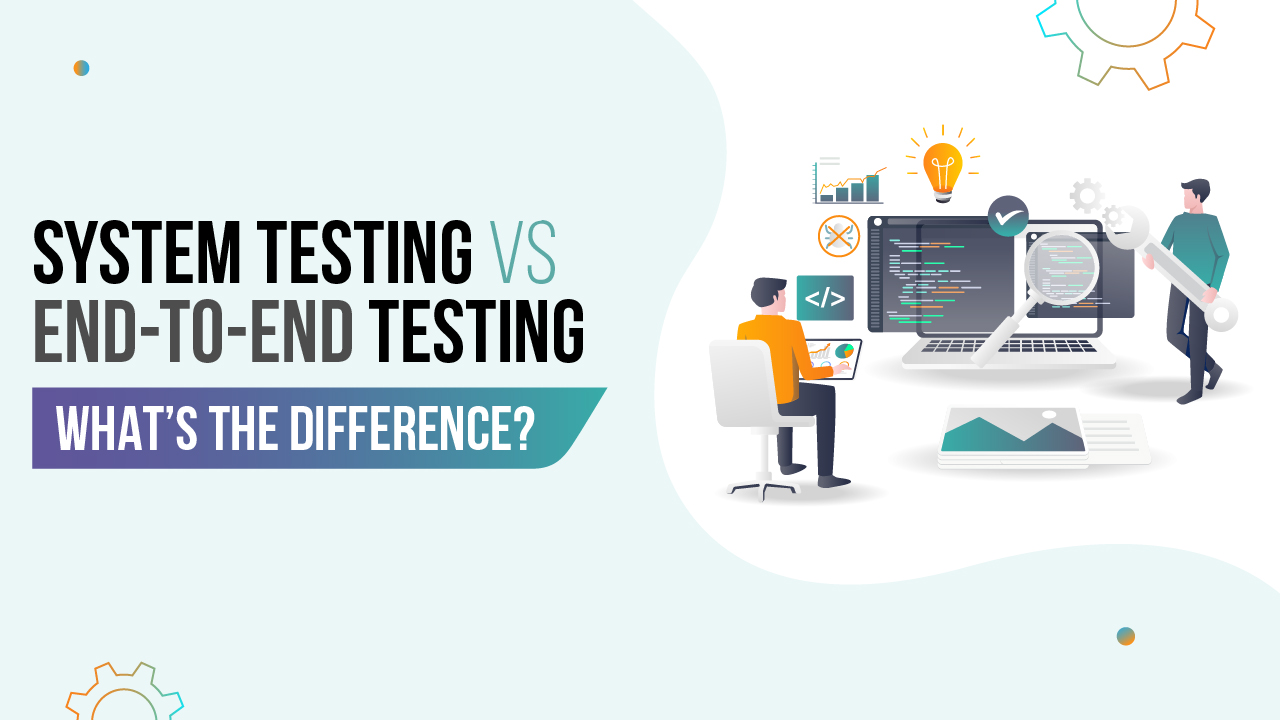 System testing vs End to End Testing: What’s the Difference?

System Testing and End to End Testing are the two popular types of software testing. These terms are sometimes used interchangeably to describe the same thing, but they are, in fact, quite different. Therefore, it is critical to understand what sets these two testing methodologies apart and how these processes ensure the highest quality standards.

System testing validates the entire system to ensure that all the components of the ecosystem, including hardware and software, perform as per the expectations. Simply put, it reflects if the application or software performs from a technical and business standpoint, validating the requirement specifications against the system specifications.

This testing is usually performed post-integration testing as the final check before the application is forwarded for acceptance testing. Though it is a black box testing method, system testing may be performed as a blend of white and black box testing based on the project requirements.

System testing imitates the end users and uses the application as they would in real life. Testers check if elements of the system hamper the application’s performance or if the application fails to perform under unfavourable conditions. Errors and bugs, which remain unnoticed in other forms of testing, are identified and reported in system testing. These may be bugs that are associated with performance, security, and so on.

Why is System Testing Important?


What are the types of System Testing?

Testers perform different types of system testing at different levels. In practice, it is challenging to implement multiple strategies in a single project. Ideally, the following techniques and activities related to them should be applied. These are:

What is End-to-End testing?

Digital systems today are more complex than ever and are interconnected with many third-party integrations. Failure of a single component may lead to a hampered user experience or even crash the entire ecosystem. This is where end-to-end testing comes into the picture and prevents the system from crashing or unexpected failure.

End-to-end testing is a software testing process in which the flow of the entire application is validated to ensure the end results meet the desired expectations. This testing primarily aims to verify the user experience by simulating scenarios similar to the real world, validating the application and its components for ease of usage and expected user experience.

Why is End to End Testing Important?

What are the types of End-to-End testing?

Horizontal End to end testing: Horizontal end-to-end testing is performed horizontally over a wide range of applications and occurs in a single ERP app. It ensures the application user can navigate across different menus and pages and find the desired functions. This form of testing also helps to find out errors that may create a barrier for users to perform specific functions.

System testing and end-to-end testing go hand-in-hand and are sometimes considered the same as both are performed to test the application behaviour. However, both vary in the purpose and metrics of testing.

The given table depicts the key differences between system and end-to-end testing:

System Testing vs End to End Testing: Which is better?

There is no denying that system testing and end-to-end testing are often considered the same, but as we saw above, that is not the case. Both types of testing are different and cater to dedicated test coverage.

While testers perform end-to-end testing to validate the application flow from the beginning to the end by incorporating the dependencies, system testing validates the same features over different responses.

As it is clearly described above, neither of the two testing processes is better than the other. Both testing methodologies are performed to validate different functions and features of the application and yield different test results.

The argument as to which system and end to testing is best comes from the misconception that both methods are alike. It is recommended not to prioritize system testing over end-to-end testing or vice versa, as it may lead to overlooking the critical features of the application.

Both testing types have a critical role to play in ensuring high-quality application releases while helping testers uncover crucial bugs and errors in different categories.

What is an example of system testing?

Let’s take an example of a mobile application that provides a cab booking facility. It will feature different functions such as cab scheduling, geo-tracking, different modes of payment, driver details, and so on.

Validating such user scenarios is covered in System testing.

What is an example of end-to-end testing?

The following is an example of end-to-end testing for a voice-recording application:

What is another name for end-to-end testing?

Why is system testing done?