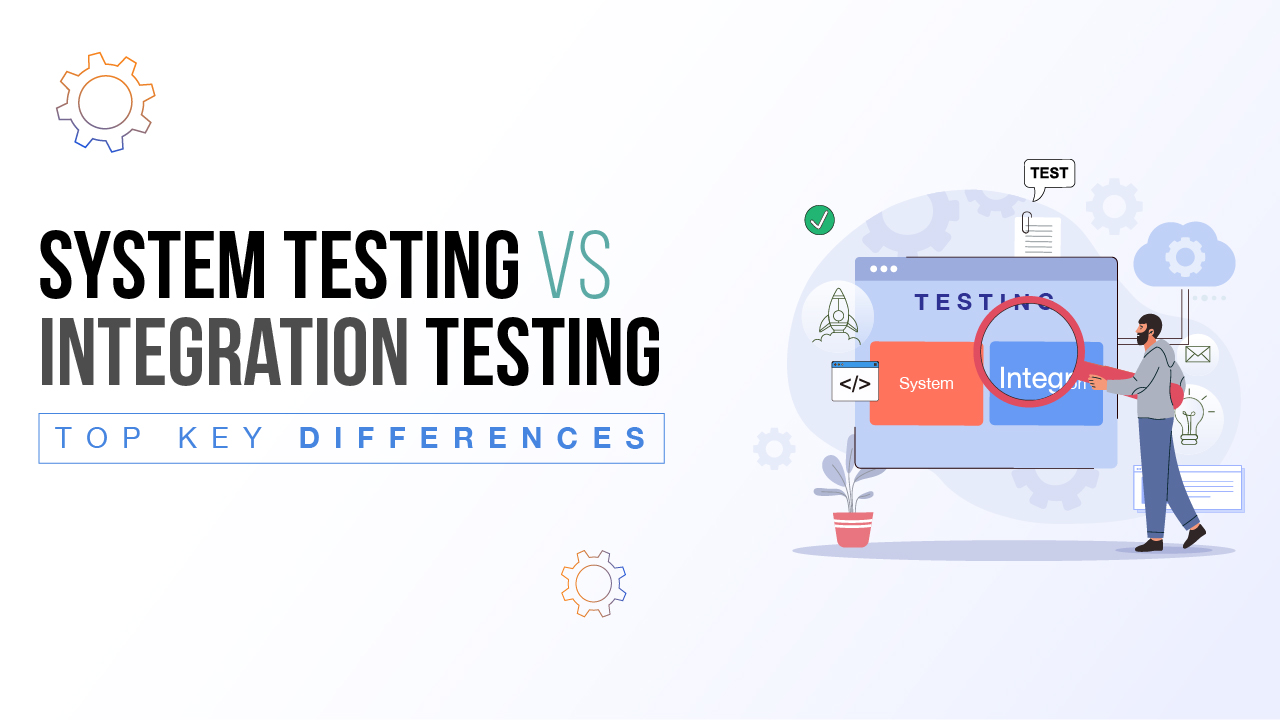 System Testing vs Integration Testing with Types and Advantages

Every software undergoes multiple quality checks in the software development life cycle (SDLC). Such analysis ensures a high-grade product, leaving no scope for future issues. But it is easier said than done. While the agile framework improves communication and collaboration in the testing process, many experienced testers still encounter uncertainty during the testing process.

Every module requires individual attention before they integrate to make a system. Any new change could incite non-functional or functional issues. Hence, following the right testing procedure is integral to avoid mishaps in the system’s build.

We understand some of these phrases might sound alien to you. But because both these tests are integral in SDLC, you need to know the why, how, and when of the System and Integration testing. This article will help you understand the basic definitions and requirements of both tests for your next sprint.

Once all the sub-systems or modules integrate to build one application, testers perform System testing to check for potential functional and non-functional irregularities. Overall, System testing checks for the system’s design and behavior as per customer expectations. It is a black box testing technique.

System testing covers the end-to-end analysis of a software application in terms of its functionality and user experience. Hence, you can categorize it into two parts—functional and non-functional.

Functional testing validates the functional aspects of a software system against the user requirements and functional specifications. It checks for user experience or interface, API integration, database, security and privacy, and server communication, as mentioned in the user document.

One example of functional testing is checking for the login functionality using the right credentials. The system should not allow you to sign in if your username and password are wrong or not present in the database.

One example of non-functional testing is checking for the number of users the system can handle at a time. It helps to determine the performance and usability of the system under high traffic.

There are a few advantages of System testing that helps uncover possible application errors that bypass the Unit testing and Integration testing stage.

When Should You Perform System Testing?

The primary goal of System testing is to check the final build after the integration of all the components. Ask your team to perform System testing:

SRS documents the technical features and behavior of a software application. FRS describes the functioning and different components of the system. Majorly, FRS does not require deep technical information and is useful for all levels of stakeholders.

What Tests are Carried Out in System Testing?


What are the Approaches to System Testing?

System testing has two approaches—requirement-based and use-case-based—both have their advantages. The former relies on project documentation as the primary criteria, whereas the latter focuses on using user behavior as its benchmark. The choice of your approach decides if you need Alpha or Beta testing, both of which come under Acceptance testing.

How is System Testing Done?

Next, in System testing vs Integration testing, we will cover the latter to understand its need, advantages, and approaches.

What is Integration Testing?

Integration testing follows Unit testing and comes before System testing. It checks for compatibility between multiple modules as they logically integrate and are tested as a group. Integration testing aims to catch possible defects in the modules after their integration; such defects might occur because of data transfer incompatibility. It consists of the white box, black box testing, and grey box testing per the requirements.

The prime focus of Integration testing is to test for seamless data transfer and communication between components. It is also referred to as I&T (Integration and Testing), String Testing, and Thread Testing.

Although every module undergoes individual testing for fault detection, it is still necessary to check how they function together. Some defects can still arise as these modules start communicating with one another. Thus, Integration testing is advantageous in below aspects:


When Should You Perform Integration Testing?

What Tests are Done in Integration Testing?

There are four Integration testing approaches that you can implement as per your need:

Under this approach, the modules integrate right after their development is over. Hence, the Integration test is done on the entire system. The Big Bang approach is useful when modules are ready and integrated for testing. It is also called non-incremental testing.

A hybrid/mixed approach combines the advantage of Top-down and Bottom-up. This approach has no sequential preference, and you can start testing either from the top or the bottom modules. So, you can test at any point in time, provided the modules are fully ready for analysis.

Point to Note: Top-down and Bottom-up approaches both come under Incremental testing as they follow a hierarchy or sequence for integrating and testing modules.

How to Perform Integration Testing?

What are the Similarities Between System Testing and Integration Testing?

In this article, we discussed how essential System and Integration testing are in the SDLC process. Although both have pros and cons, you need to follow these quality checks to ensure that your system is functioning as intended with all its modules intact.

It is best if you go sequentially and follow the agile methodology to perform both of these tests. This will help you to proceed in the right direction with the right information to test your software application.

By highlighting their differences and similarities, your team can conclude when and how to perform these tests that offer the best results.

Suppose you are looking to move ahead with automation to build your QA team and ease their testing process. In that case, you can go for various automation tools, such as Selenium, Testsigma, Protractor, and Rational Integration Tester. All of these tools provide a bunch of features to carry out the system and integration testing.

We recommend you try a demo of Testsigma and see if the product matches your expectations. But if you are sure about going for a codeless testing automation platform, Testsigma is the no-brainer choice.

What comes first in System Testing vs Integration Testing?

What is an example of System Testing?

What are Integration testing examples in real life?

Which tools are useful for System Testing?

What tools are good for Integration Testing?