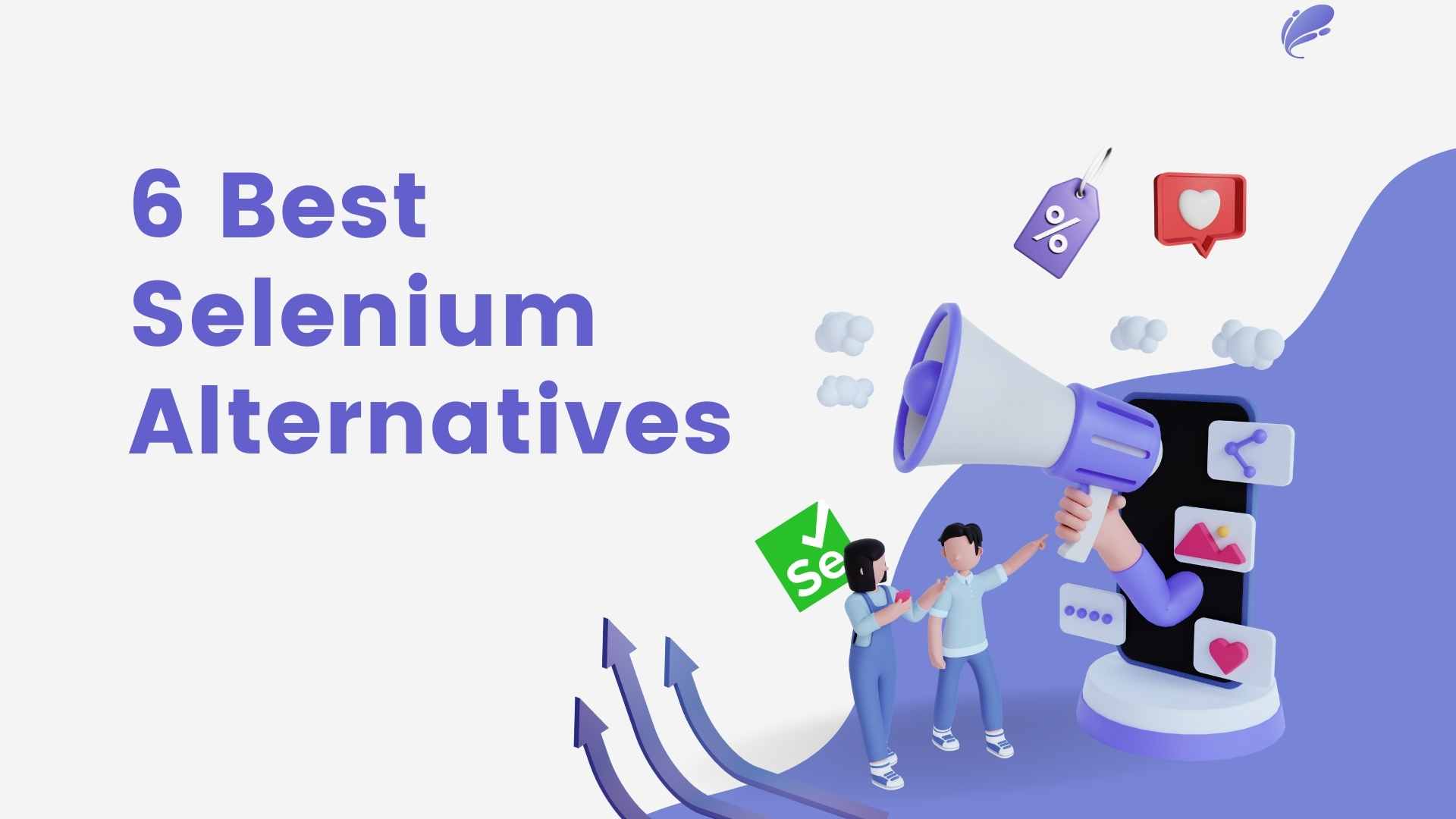 Selenium is one of the most popular and widespread open-source software testing tools for browser testing and automation. With Selenium, people can run automated tests for web applications through various platforms.

Unfortunately, this handy cross-browser testing tool does come with some caveats. The good news is that there are plenty of test automation tools you can find in the market – do just one Google search, and you will stumble upon hundreds of alternatives to Selenium.

But among all the options, what are the most practical Selenium alternatives? How do these options compare to Selenium? Today, we will discuss all of these. Keep scrolling if you are interested!

Why Do People Use Selenium Web Testing Framework?

To make the test scripts and code the logic, several popular scripting and programming languages are supported in Selenium, including Ruby, ava, PHP, Python, Perl, etc.

The key reasons for Selenium’s popularity are the absence of license fees and portability.

Benefits and Drawbacks of Test Automation with Selenium

Selenium comes with a good range of pros and cons. Here is a concise overview of them –

Our first pick is an up-and-coming Selenium alternative that has been growing in popularity fast. This simple, flexible, and reliable tool provides functional and regression testing, cross-browser testing, continuous testing, data-driven testing, and more. Testsigma supports both web apps and mobile apps.

Testsigma has been created to be an all-in-one test automation platform where you can plan, design, develop, run, and analyze tests. It uses AI and smart technology to reduce the test times vastly.

Know more about how Testsigma can help you continuous testing to achieve continuous delivery.

Testsigma’s regression testing tool is so efficient that tests that usually require weeks in traditional platforms need minutes to complete.

That is not all; you also get the chance to write test scripts in simple English instead of complex coding language. This makes it very easy for anyone in your team to develop and perform tests, even if they do not have an IT background.

With continuous integration of AI and the NLP-based approach, you can manage and maintain tasks effortlessly.

Testsigma Vs. Selenium: How Do They Stack Up?

Testsigma’s biggest upper hand in this comparison is its simplicity – you can write test scripts with simple English! This makes codeless automation possible.

It is also better for customizing your test environment requirements. And lastly, Selenium’s most significant drawback – not supporting mobile apps – is not present in Testsigma.

On the other hand, Selenium is quite an established name in the industry. You will find many more plugins, drivers, frameworks, and bindings available on this platform. But despite that, in terms of functionality and ease of use, Testsigma is one of the best alternatives to Selenium, hands down!

Here is a in depth post on how Testsigma performs compare to the Selenium, Tricentis Tosca, Micro Focus UFT (formerly HP QTP/UFT)

And here is a comparison on Testsigma vs selenium.

The selling point for Cypress is its simplicity; it does not require any special setup for installation. Functional testing is quite simple in this tool, even for beginner test engineers. A QA engineer can get it up and running in just a few hours.

This automation testing tool is JavaScript-based, and used mainly for unit testing and front-end integration. You can add many plugins to customize this tool to your preference.

Another cool thing about Cypress is that you can view changes as they happen in real-time with the app preview function. So, you can view the automation testing in action with it. Test failures are easy to detect this way.

Cypress Vs. Selenium: How Do They Stack Up?

While these test automation tools are pretty similar, Cypress is simpler to execute. It has growing popularity because of its capabilities to complement other web development tools. You can use Cypress along with Selenium to enhance the scripts, stability, and test coverage.

Selenium stands out in terms of versatility. Cypress only supports JavaScript. While it supports multiple browsers, Apple Safari is not available in Cypress, unlike Selenium.

A plus for this Selenium alternative would be its strict regulation of current development practices, which Selenium lacks.

When you look into Selenium alternatives, Cucumber is another popular name every time. It is a behavior-driven development automation tool. It combines test documentation and specifications.

The standout for Cucumber is that anyone can understand and use this tool, not just IT experts. Initially, it started out using the Ruby programming language, but another script called Gherkin was introduced later.

Gherkin is a plain English script with which the testers can write down scenarios (acceptance testing) describing the behavior of a system from the user’s POV. It runs the test automation based on these scenarios.

Cucumber vs. Selenium: What’s the Difference?

Selenium does UI testing, while Cucumber is for acceptance testing. The former tool uses coding scripts and languages, while the latter is much simpler, utilizing simple English scripts.

Since no language learning is needed, creating test automation scripts with Cucumber is amazingly simple. Anyone can write, read, and understand the script without prior experience in test management.

As such, it has frameworks for distinct types of test automation. You can further expand its use using extra test libraries such as Java. The framework can use these libraries as an interface to access different systems for tests.

Robot Framework is not bound to any platform, application, browser, or technology – You can use multiple platforms for writing test scripts with this tool. It is easy to learn if you are familiar with keyword-based testing.

This is an all-encompassing framework with many key functionalities, such as detailed logs, high-level architecture, a test data editor, libraries, clear reports, etc.

Robot Framework Vs. Selenium: How Are They Different?

You can use the Robot testing tool for testing Android and iOS apps, which is unavailable in Selenium.

As a tool for WebDriverJS, Protractor supports behavior-focused development frameworks such as Jasmine, Cucumber, Mocha, etc., to write test code. You can write test suites for behavior-based test cases with this tool.

Protractor has an ‘Automatic Waiting’ function. With automated testing, the steps are seamlessly executed without waiting for the test and the webpage to sync. So, you can test web apps faster with this tool.

Protractor has been built on top of JavaScript selenium WebDriver so that you can enjoy all the Selenium tests and automation tools with it.

Protractor vs. Selenium: Are They the Same?

However, Protractor has a few functions that you will not find in Selenium, which makes it one of the most popular Selenium WebDriver alternatives.

Because it specializes in Angular testing, Protractor is a more straightforward automation test tool for Angular apps. It is based solely on JavaScript, so you cannot use any other coding language with this tool.

Last but not least, we have a visual and layout testing tool that can run UI automation testing on parallel platforms. Parallel test execution is not the only thing Screenster offers; you can run coded and codeless tests with it too!

Screenster is one of the best Selenium alternatives purely because of all the functionalities it offers. You can do visual testing, UI testing, and self-healing tests with this. It is a platform-to-platform user interface automation tester based on cloud.

The best part of this Selenium alternative is its codeless functionality – it is made so simple that anyone can use it without having to write a single line of code.

You can also integrate it with other web applications and services such as Jira, Bamboo, TeamCity, TravisCI, Jenkins, etc.

Screenster Vs. Selenium: How Do They Compare?

Screenster is a paid Selenium alternative that runs automation test cases. It comes with a very user-friendly interface, which makes website testing a piece of cake! By comparison, Selenium has a steep learning curve. It is meant for more professional use, so novices cannot grasp it simply.

The selenium tool is used for functional, regression, and load testing, while Screenster focuses on automated UI cases. And so, it provides lots of useful features for UI testing, which you cannot find on Selenium.

When choosing an automation tool, you should evaluate your needs and project requirements – such as required language, teammate expertise level, type of test needed, etc. Keeping such considerations in mind will help you choose the best web automation tool.

That is all from us today. Thank you for staying with us!