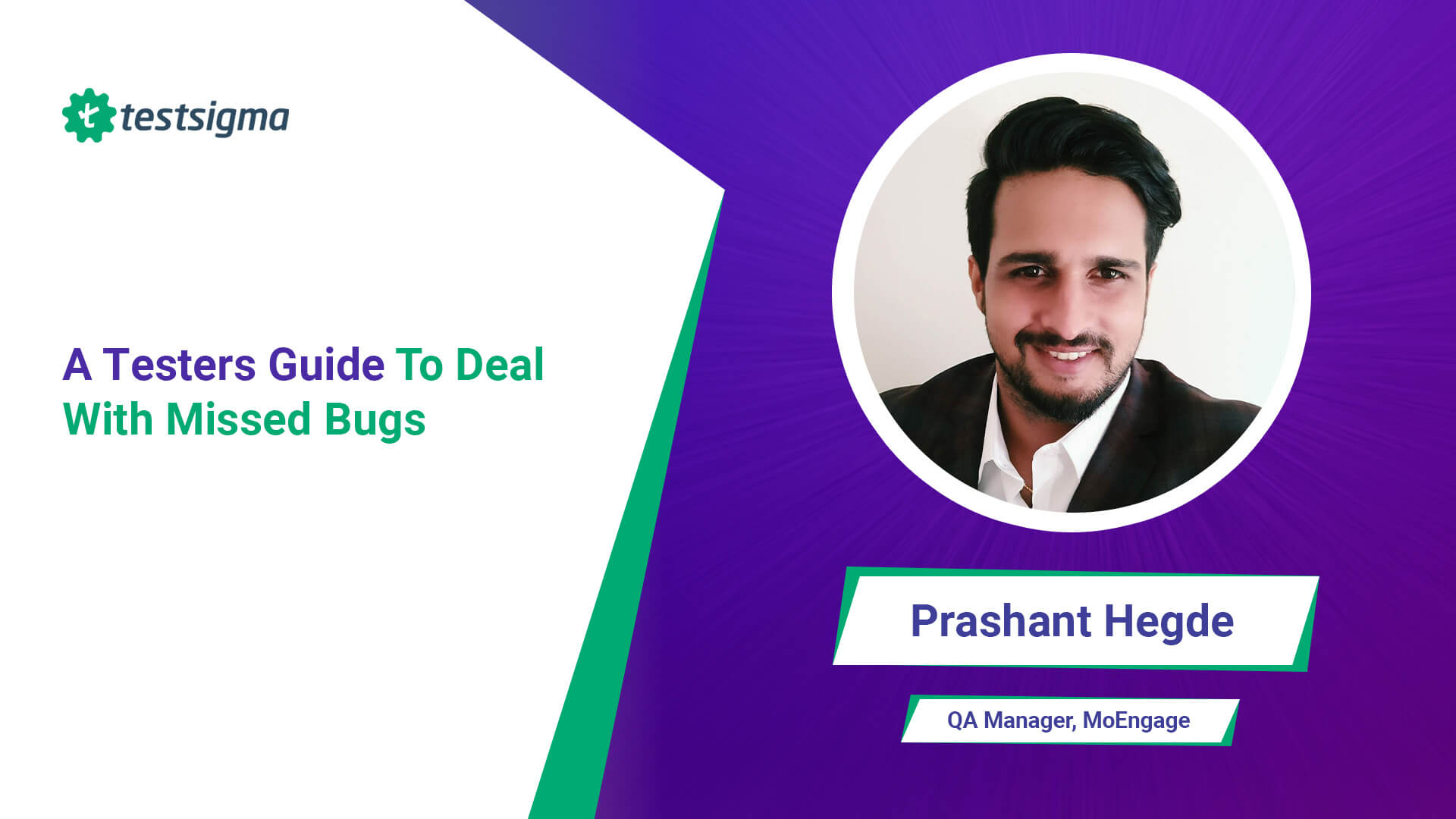 A Testers Guide to Deal with Missed Bugs

Even with the increasing adoption of Agile and DevOps, many organizations still consider testers the gatekeepers of quality and are solely held responsible for the quality and approving releases. Such organizations blame testers for a missed production bug.

No matter how much you test, there are so many bug types in software testing, that a few bugs can still slip through the testing phase & reach production. Every software tester would have come across a situation of a missed bug in software testing. For many testers, it’s a terrifying nightmare. Such situations can be overwhelmingly stressful and scary!

This article will discuss how a tester can deal with a bug in production.

How a Tester Can Deal with a Bug in Production?

1. First Off, Stay Calm –  Focus on What is Within Your Control

Dealing with your angry customers and your annoyed managers while figuring out what went wrong requires you to stay calm. Get some breathing space where you can think peacefully about the next steps.

1. Do not get involved in the blame game; it won’t help anyone.

2. If you missed testing something, it’s totally fine to admit the oversight and take corrective actions. Accept the fact that no one is perfect all the time. Owning your mistakes will only increase your credibility.

3. Don’t Panic. Understand that no software is bug-free. Exhaustive testing is impossible with limited time, resources and budget. Additionally, your users may use your application in ways you never imagined.

4. Stop worrying about the past – Free your mind to focus on what is within your control.  Help your team by –

i. Reproducing the issue – is the most significant contribution you can make to your team to resolve the issue at the earliest.

ii. Gathering more information – look at the support tickets, talk to the customers or support team, look at logs or monitoring tools

iii. Communicate with different teams and Identify the changes released recently. Verify if those releases introduced the bug.

iv. Identify a workaround – A user can complete some action in your application in multiple ways. If there is a workaround, unblock your users and let them know alternative ways of achieving the task. If required, work with customer success and support teams to communicate the issue and the workaround with your customers. Every missed bug to production need not have to be fixed immediately.

v. Roll out a quick fix – Work with your team to solve the problem as quickly as possible. Do not look for a perfect solution while sending a patch, but rather one that unblocks the customer soon. Ensure that you test the patch before the fix. Sometimes the fixes introduce new testing bugs. Identify the impact areas and explore them for risks before releasing the fix.

vi. Don’t shy away from asking for help from other testers to accelerate the release of the patch.

2. Learn From Your Mistakes – Turn Them to Your Advantage

See mistakes as an opportunity to learn. Think about ways to prevent similar mistakes from happening in the future.

i. After the patch is released, conduct a root cause analysis and investigate how they got through the testing phase.

ii. Brainstorm with your team about the possible ways to prevent similar issues in the future

iii. Identify the gaps in your process to avoid similar bugs in the future. Strengthen or change your process as per your context.

iv. Use the learnings to update and improve your test strategy, plan, test cases, and automated tests.

v. Use open-source tools like Testsigma, and start automating your happy flows. When automated tests help you find the obvious bugs, you can focus on deeper and more creative tests to uncover hidden bugs. Furthermore, give early feedback to your developers by seamlessly integrating with your favorite  CI/CD tools.

viii. Document and share your learnings with your entire team—track action items to prevent similar issues in the future.

ix. Introspect into what you could have done better or different. Seek help from your team if you do not clearly understand a feature/system/module.

Though bugs are inevitable, the consequences can be severe for the business.

ii. Staged rollouts – roll out the update to a subset of users first. Upon gaining confidence, you release it incrementally to the rest of the users.

iii. Blue-Green Deployments – runs two identical production environments called Blue and Green. At any time, only one of the environments is live and serves the production traffic. While Blue is live, green is idle, and vice versa.  Let’s say blue is serving the traffic currently. When releasing a new feature, you can deploy and safely test on Green (which is idle). Upon completing testing, you can switch all incoming traffic to green. Now Blue goes idle. This technique reduces risk in case of an issue: if something unexpected happens with your new feature on Green, you can immediately roll back to the last version by switching back to Blue.

v. Beta testing – Get the application tested in a real-world environment by early adopters.

4. Educate Your Stakeholders – Strive to Build a Testing Culture

Why do decision-makers and executives think that “Testers are responsible for missed bugs” or “Quality is the sole responsibility of a tester”? It’s primarily because of a lack of awareness about testing and the role of a tester. The first step to building a testing culture is to educate your organization about testing by debunking myths.

Testers explore, learn, investigate and test the software to provide information about the quality of the software and the associated risks to the business. This valuable information enables businesses to make informed decisions. Some executives and managers have the old-school mentality that testers are gatekeepers of quality. Several managers are aware that “Testing is everyone’s responsibility,” but they do not know how to involve developers, product managers, and other non-testers in testing activities.

As a tester, coach the whole team has to take up testing responsibilities within the software development. Below are some ideas –

1. Hold three amigo meetings – A meeting where the Product Manager, Developer, and tester meet to discuss the requirements before development.

i. Enables everyone to be on the same page about requirements and the scope of the testing.

ii. Collaborate to find ambiguities at the early stages(requirement, design, etc.) to avoid rework and save costs.

2. Make unit testing a part of the definition of done. Furthermore, start measuring and publishing unit test coverage in your test reports.

Understand the bug attributes: priority and severity differences from this article

When testing complex applications, you cannot find every possible bug in limited time, resources and budget. Implement risk-based testing – prioritize testing those areas of the application that are most critical to the business. Realize that QA cannot assure quality but only assess the quality of a product. Anticipate issues and have a plan to rollback without impacting the customers. Furthermore, build a culture where everyone contributes to testing.

As long as you learn from your mistakes and constantly improve – A missed production is a blessing in disguise. A missed bug teaches you the lessons you will not forget, which no testing books teach you.

Share your experiences of a missed bug and how you fix them in the comments!

How Do You Deal with Inconsistent Bugs?

Document everything that has transpired since the bug first appeared, including complete reports and screenshots, as well as clear procedures to recreate using test data, while logging the defect to avoid needless revisiting from other teams.

Why Some Defects will Always be Missed?

When testing is done manually, the room for bugs in testing or missing out defects is always present. To aid this issue, opting for automated methods would help achieve efficient results.

How Do You Handle Production Bugs?

How Do You Handle a Critical Bug Before Release?

When you find a crucial bug before release, try to find the cause first. Find the bug’s characteristics and how it affects the ecosystem:

Why Testers Should Embrace Hanlon’s Razor

Amplify your relationship with testers this valentine’s day!

Role Of A Software Tester In Code Reviews

How to become an automation tester with no stress?

Prashant Hegde is a passionate testing leader. He is experienced in building and leading high-performing teams. Prashant heads the QA team at MoEngage, a leading insights-led customer engagement platform. Prashant enjoys sharing his experiences by contributing to software testing communities worldwide. Prashant is an avid blogger and a frequent speaker at industry conferences.