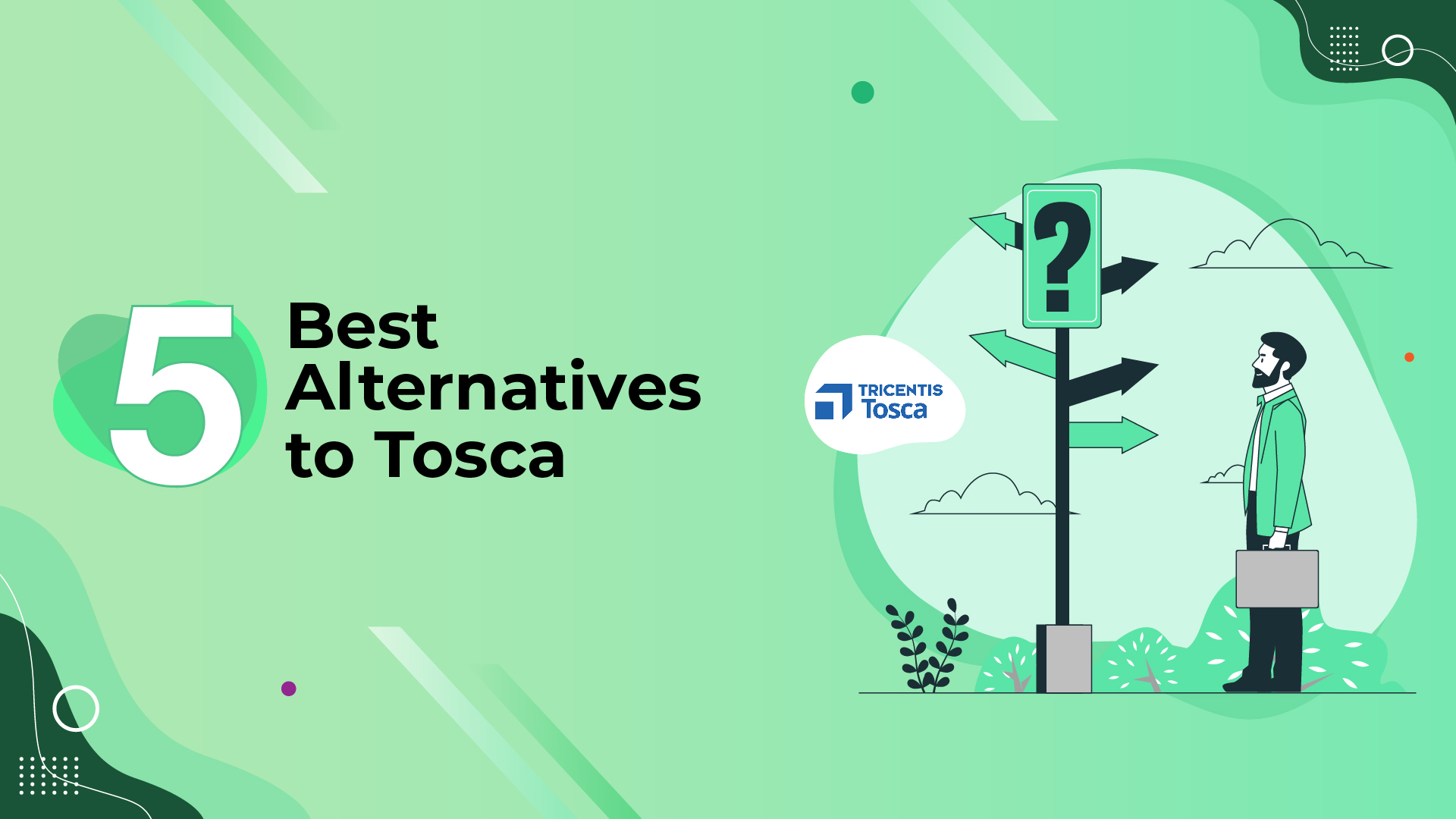 It is frustrating enough to pull an all-nighter to write a code or test case. But what if you realize that it has endless errors that need debugging while your go-to software tester is unavailable?

If you need to find Tricentis Tosca alternatives, follow this guide to decide which one to choose from a list of the five best applications we put together.

5 Best Alternatives to Tosca — Which One Is for You?

No single software has all features, so it is your responsibility to figure out which of the following will suit your needs most appropriately. We have presented forth an unbiased set of reviews for the top alternatives:

Testsigma is a test automation tool that allows simplified continuous testing of code for mobile and web apps, and APIs. It doesn’t require any framework — meaning anybody can do this.

The platform requires minimal setup among other software testing tools. You can run your tests without worrying too much about configuring the algorithm.

Testsigma enables you to develop and execute test scripts in plain English for a more humanized approach to test automation and test maintenance.

Testsigma Vs. Tosca: Which One Is Better and Why?

Although both of these have very similar user ratings, we need to analyze why Testsigma is one of the best among Tricentis Tosca alternatives:

i. Testsigma Is for Everyone

Testsigma is an excellent tool for everyone, from beginners to advanced. Whether a businessman or a coder, you will find it easy to automate your scripts as the smart AI converts the automated testing scripts from manual mode. Meanwhile, Tosca focuses on automation testing and agile testing.

Both Tosca and Testsigma offer data import features. However, the latter allows scheduling and makes the best utilization of your time by sending notifications.

Testsigma is well-known for usability testing and performance testing that increase the quality and refinement of your mobile or desktop applications.

Another significant distinguishing feature is that Testsigma has a bug tracking system, unlike Tosca. Furthermore, Testsigma is available on Android and iOS devices.

The codeless approach allows quick end-to-end testing of your entire virtual scenario, making it stand out among other Tosca alternatives.

Both tools allow multi-host use and editing across on-cloud devices. These are dedicated to SMEs, start-ups, and individual freelancers.

Developed by SmartBear software, TestComplete is another automated testing tool. This one promises to uphold the quality of your software using AI-based agile testing. Your application can be tested flawlessly by TestComplete regardless of whether it is desktop, mobile or web-based.

TestComplete Vs. Tosca: Which One Should You Choose?

Here are a few rationalizations for one winning over the other:

A minimum amount of scripting is needed to run TestComplete. But Tosca is codeless, making it a more generalized experience for users hailing from different niches. So, coding knowledge or lack thereof makes a distinction between the two.

Although Tosca is known for its fast output delivery, it might have a relatively shortened flexibility. TestComplete has a flexible UI that enables your somewhat inexperienced team to get the best out of it.

Output visualization is available in TestComplete, but not in Tosca. In a world where visual learning is a trend and tactic, Tosca can fall behind if image-based parameters are not introduced.

TestComplete enables you to test via desktop or phone, where you can finish testing automatically without performing test steps. This is found to be a great time-saving and productive tool believed to boost software quality.

You can run tests in both keyword-driven and script-driven methods (TestComplete supports about five languages that you can work on). And we could visualize our test results by screen capturing.

With TestComplete, there is a scope for BDD testing and cross-browser testing. Its user interface is simple and beginner-friendly, with drop-down menus and demos that help with documentation of test scripts, which further require automation and provide functional tests.

LambdaTest is mainly known for its cross-browser testing abilities. This one does safe-keeping of your application by using integrated debugging and preventing bugs, mainly dedicated to QA engineers and business users.

LambdaTest Vs. Tosca: Which One Stacks Up for the Better?

LambdaTest has some key features unlike similar applications, which makes it the winning game among other Tosca alternatives:

LambdaTest allows geographically networked testing. If you have ever used a VPN to experience the content of a particular geographical location, this is almost similar. LambdaTest will let you explore your test application from a global perspective.

The complete traceability feature is remarkable since it helps optimize the content of your initial setup. And it performs seamless integration of your test data and test planning.

LambdaTest has a fantastic feature of parallel testing. We think it is contemporarily appropriate since the world has shifted into a virtual world of office work. And this will require team members to work from different demographic locations simultaneously.

This one is also great for live testing, the entirety of which is cloud-based, and we could interact with testers using any operating system in real-time.

LambdaTest is the best tool for codeless automation that allows you to develop web and mobile applications.

v. You Get to Conquer Distance

If your products are international: you get to test the geographical function of your applications. You can be working both on the web and mobile, where you receive good support on performance testing across open-source software platforms.

This is another one of Tosca’s alternatives since it is also codeless. Katalon offers a complete automation framework across all operating systems. Besides, it offers high-end recording features that are essential for some individuals.

Katalon and Tosca are automated tools that can save both time and effort wasted on performing manual testing. We will discuss their prominent features to see which stacks up for good:

Tosca wins the game in terms of the number of services being offered. Katalon gives a lot of importance to web test automation, while Tosca is a more commercial approach to integrating tech and industry. This software also offers performance testing and provides a load testing solution.

Both offer a hierarchical view and requirement selection. However, Tosca offers Unicode Compliance, unlike Katalon.

Katalon allows users to schedule and track bugs as an additional feature, which is absent in Tosca.

Another alternative is open source software Worksoft Certify, which is the perfect rival for Katalon. The former offers more machine learning language that Katalon fails to provide.

With Katalon, you receive comprehensive support on functional and continuous testing. This can be useful for developing mobile apps, web apps, and desktop applications.

Katalon is an aggregation of several sub-genres of applications such as Katalon Studio, Katalon TestOps, Katalon TestCloud, etc. Parallel testing and end-to-end testing are other features exclusive to this.

A TestCloud feature is a tool that comes in handy for cloud testing experiences. The environment is a digital world set up for on-demand test runs for working from the web and mobile. Katalon Studio, particularly, offers a codeless testing solution and test automation framework.

If you need to run commercial level automation tests as found in Micro Focus software, TestCloud is an alternative to that as well.

Also Know: The comparison of Katalon and Worksoft from this worksoft alternative article

Like other alternatives on the list, Ranorex is an automated testing tool that works for the web, desktop, and mobile apps. The distinctive feature of this one is GUI-based testing.

If you want a tool that revolves around other services such as API, QA, and corporate applications, then you should head to Micro Focus. This application allows low-code to no-code level testing with IDE-based extensions.

Ranorex Vs. Tosca: Up for the Debate

Here are the points that differentiate Ranorex from Tosca:

Ranorex does not require coding, so even if you are not a coder, you will be able to run your automated tests. There is one loophole despite claiming to be an automation tool. Sometimes, you may face a situation where Ranorex fails to automate a specific piece based on unpredictable factors.

ii. Ranorex Is an All-Rounder, Tosca Is Not

Ranorex is an intuitive application that performs extensive operations across platforms, while Tosca does not allow users to integrate the cloud and a particular project.

Apart from common features across both applications, such as move and copy, hierarchical view, parameter selection, etc., Tosca offers two additional features that Ranorex does not: security testing and Unicode compliance.

If you want to access Selenium testing across Selenium grades for testing GUI- based code and creating API tests, then Ranorex is a good choice. You also get an object repository for storing huge chunks of data.

Also Check Out: Comparison of Tosca to Testlio in this article.

Now that we have reviewed the 5 Tricentis Tosca alternatives in detail, it should be easy for you or your company to choose one that you will enjoy the benefits most.

Since none of the applications mentioned above is a master of all trade, you might sometimes need to switch between platforms, which should be easy if your preferred application allows on-cloud file sharing.