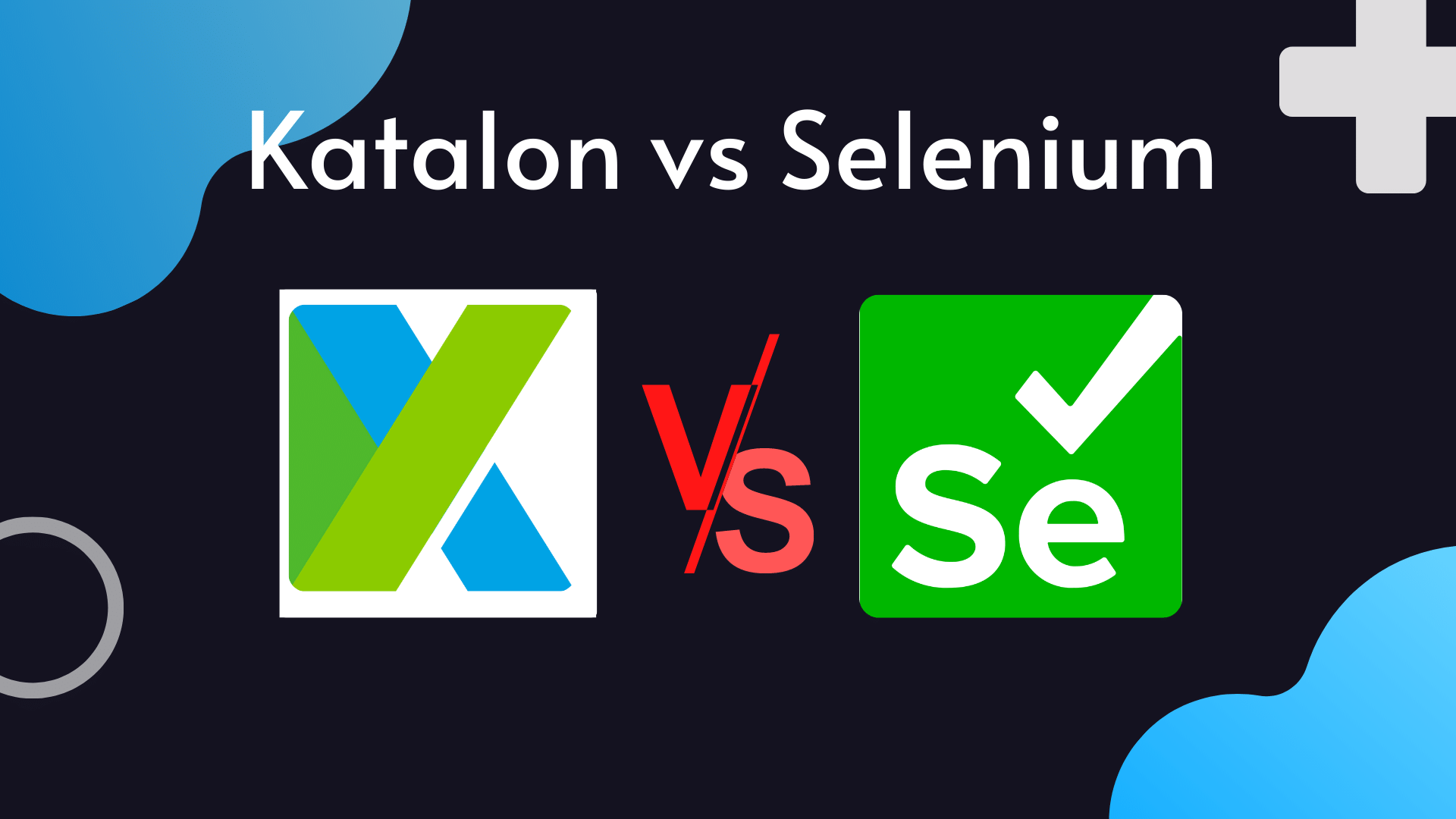 A Detailed Comparison of Katalon vs Selenium [Pros & Cons 2023]

If you are someone who is developing a web desktop or mobile application then you need to run tests to see if everything runs smoothly or not. Doing that with hundreds of manual tests can be exhausting and inaccurate, but because of automated testing software, it’s doable and very easy.

However, even with automated tests, you may need advanced programming skills. Today, we’re looking at Katalon Studio and Selenium. Both of these software testing tools can create test scripts in several programming languages and can be made to have great analytics capabilities. Since choosing between these two tools can be tough, we are here with a detailed comparison of Katalon vs Selenium to make the decision easier for you!

So, let’s begin, Katalon vs Selenium: A Comprehensive Comparison.

For automation testing, Katalon Studio is highly recognized along with some other tools. Its user-friendly interface doesn’t require users to have much prior programming knowledge.

Actually, Katalon studio has dual scripting interfaces, so users with a lot of knowledge about programming languages can do debugging, scripting with syntax highlighting in scripting mode, and many other things.

This tool does test automation for mobile applications, Windows desktop apps, and of course, web applications. Katalon studio surprisingly has a Selenium-based engine. This Katalon studio Selenium can create test scripts for UI without the need for coding.

You will be able to run the automation tests of the Katalon studio on all popular operating systems such as Windows, macOS, and Linux. The test execution is also great on the common web browsers, and you will get test results quickly.

This tool is very versatile and has large test coverage, allowing you to perform testing of different types such as API testing, web testing, data-driven testing, cross-browser testing, mobile testing, and desktop testing.

There is no need for additional software extensions with this tool because it has continuous integration capabilities with a large number of software that helps with test cases planning, defect management, etc.

Katalon recorder gives this tool a record and playback feature which provides a simple but detailed Katalon analytics of the test runs and video of the test recording.

While you can get the Katalon studio basic version, there are upgrades which are the Katalon runtime engine and Katalon TestOps (Katalon Analytics).

Furthermore, there is the Katalon studio enterprise, which is paid. The Katalon runtime engine lets users do automated testing in command-line interface mode and console mode.

On the other hand, Katalon TestOps works with Katalon recorder for improved reporting and analytics and has test execution, test management, and test planning.

Selenium is an automated testing tool that is used for web applications. Tests done by the Selenium are called Selenium tests, and they can be only done for web apps, not desktop or mobile apps. This tool is widely used by developers because it is very flexible for web app testing.

It is supported by all the common browsers like Chrome, Safari, Firefox, etc. You can also carry out the tests in any of the following three operating systems: Macintosh, Windows, and Linux.

The test automation scripts are written in all of the popular programming languages such as Java, C#, Python, Ruby, .Net, and Perl. The Selenium WebDriver has an application programming interface (API), Library, driver; components you can use to build a functional test automation framework. Combined, they allow you to carry out different types of automated web application testing.

You also may have heard of Selenium IDE, which is available for Mozilla Firefox and as a Chrome plugin. It records all the interactions in the browser and generates the code for these interactions, to be used as test scripts.

Selenium IDE can write these codes in different scripting languages. These native plugins can help you review many test cases, but the code written by Selenium IDE is too clumsy for automation test script. Integration of Selenium and tools like JUnit and TestNG works great for creating reports, and handling test cases. Continuous testing can be achieved with Selenium if it is combined with other tools like Docker, Mavis, and Jenkins.

Another great thing about Selenium is that the automation test suites you create for specific test objects can be reused on different operating systems and browsers.

Katalon vs Selenium – What Are the Differences?

In many ways, Katalon studio and Selenium are similar. Here are the Katalon vs Selenium key differences:

Before we get into anything, we need to look at who the Katalon studio is for, and who the Selenium is for. As we have discussed before, Katalon studio has a dual interface. Users with limited technical knowledge and those who may not even know one programming language properly are able to use it. However, it also has all the important tools for its advanced users, and with the Katalon studio, the users will be able to get access to debugging, code suggestions, and syntax highlighting.

Using Selenium with very limited technical knowledge will be extremely difficult as it is developed for users with at least moderate programming skills.

While Katalon studio comes with almost everything in a bundle, with Selenium you have to install libraries, get Selenium IDE (optional), and set up the framework yourself. Regardless of which testing software you choose, it would be best if you had some level of programming skills.

Most importantly, if you are looking for a desktop or mobile automation tool, then you should immediately scratch Selenium off your list as it only works for web apps. It’s mobile counterpart, Appium, has a similar functionality, which is a different article altogether.

Both these tools work with common browsers like Chrome, Firefox, and Safari. However, Katalon studio is more flexible because it works with more browsers like Microsoft Edge, and Opera.

Katalon comes as a complete bundle, and the only thing you have to do is download and install it. Unlike Selenium, this tool doesn’t call for many other installations. However, you may have to install Appium, XCode for Mac, and Node.js for Windows.

It is worth highlighting that the Katalon studio does an excellent job at making their UI very rich with readily usable features to manage your test case and test data, code suggesting, and debugging while making it easy to use as well.

When integrated, Selium and Appium can create a very intuitive platform for professional SDETs. However, there are too many complex features that are unnecessary and can make the interface very difficult to use for beginners.

It is important to know the scripting language support of the two tools as it determines the compatibility, and versatility of the tool. With Selenium you will get a lot more flexibility in terms of scripting languages, as it has many.

Unfortunately, there’s only the option for Groovy, which is a language made on top of Java for Katalon studio.

Selenium tends to be faster than Katalon studio. The reason is the scripting language, which for Katalon is Groovy, and since it is built on Java, it has to load more test objects, libraries, etc.

The difference in speed and performance will be noticeable if the test is very long. For smaller automation purposes, the performance of the two tools is similar.

A data file object is present in the Katalon studio, which queries data from external resources. These resources include Excel files, Relation DBs, XML files, and CSV files.

The data driven testing feature is also present in the Katalon studio, and it works perfectly with external data file objects like Excel files.

The case is not the same for Selenium. Code of the test data must be hard-coded by users into Selenium, which can be a very tedious task.

Recording the tests allows users to generate the right test steps with the correct keywords, and it also helps to capture objects in recording. The good thing is both of these tools have recorders.

Selenium IDE also does well in recording the test runs and exports the recording into TestNG or JUnit test cases. It’s worth knowing neither the Katalon recorder nor the Selenium IDE function in mobile devices.

With reporting, Katalon studio does a much better job. The reports by the Katalon studio are easy to read while also consisting all the important details you need to know in case of the test fails.

Meanwhile, Selenium doesn’t even provide you with a reporting tool. You may get a very simple free or paid reporting tool separately.

You will be getting some commonly used keywords installed with the Katalon studio, and these keywords will be useful for most test cases. However, you also get an extension with the ability to make custom keywords. In Selenium, users don’t get any built-in keywords, and all of them must be programmed by the users.

Although both of these automation test tools are fantastic, in our comparison of Katalon vs Selenium, Katalon studio did slightly better than the Selenium.

However, your opinion may differ based on your different needs. Regardless of which one you choose among Katalon vs Selenium, we can assure you you’ll get good results!

Is Katalon Good for API Testing?

Katalon allows you to test any web, mobile, API, or desktop program. The tool is constantly evolving, allowing users to scale-up testing projects with its solution in a reliable manner. However, the Katalon Studio free edition lacks the debugging feature, and the data-driven capability at the test case level is not available.

What Language does Katalon Use?

Groovy is the language Katalon uses, and it is built on top of Java.

Groovy and Java are the two programming languages utilized in the Katalon Platform; Java libraries can be imported into a project and can be used as regular functions.

Katalon does provide an open-source version with limited features

With minimal coding, the dual scripting interface tester would be able to automate test cases using the Katalon tool

10 Best Testlio Alternatives That You Should Try Out