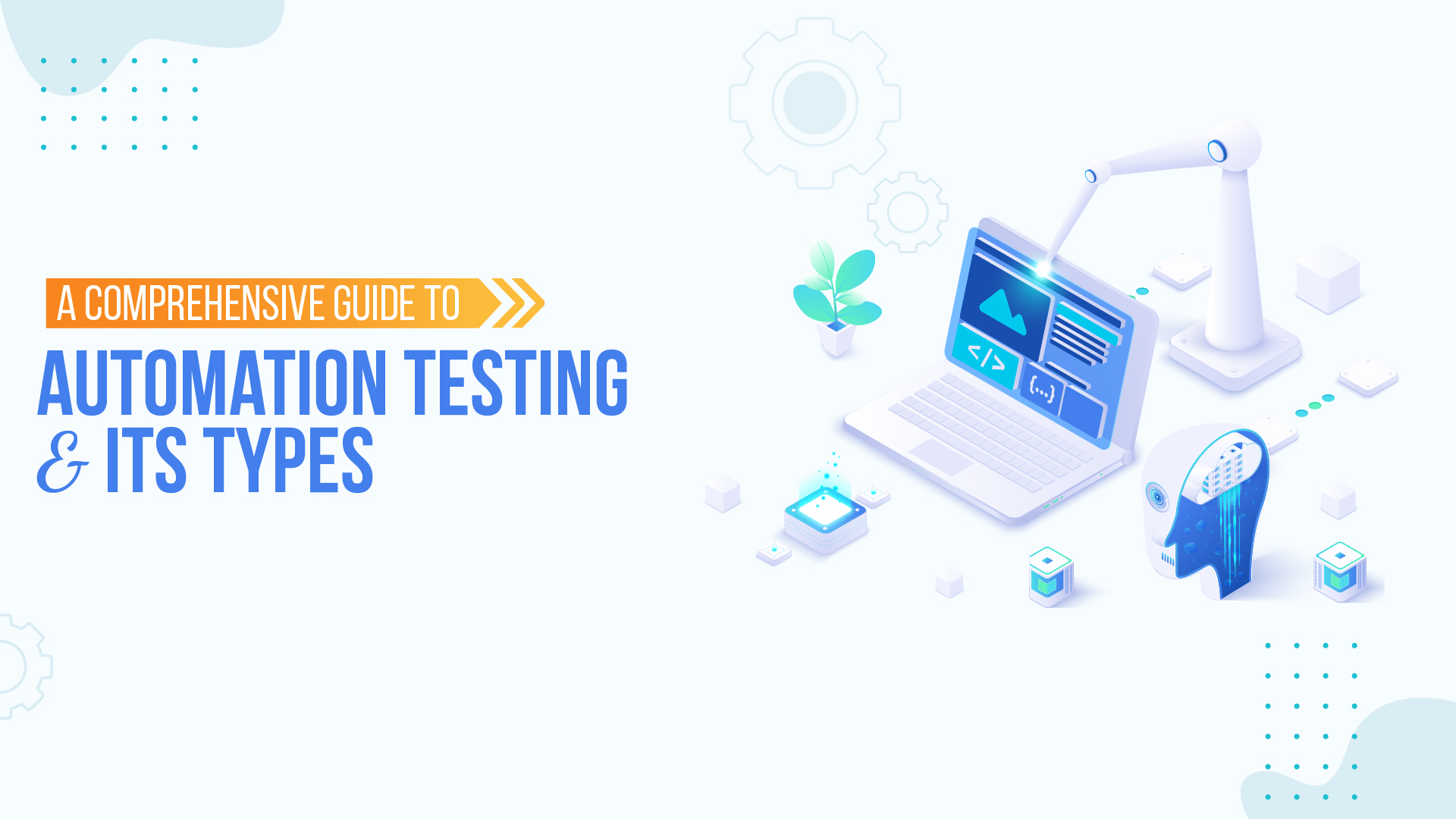 A Comprehensive Guide to Automation Testing & its Types

Automation testing is a technique in which testers leverage automated software tools for executing test cases. These tests typically include operations that are repetitive in both their nature and outcome.

Automating the test suite helps in saving time and effort required in performing repetitive and resource-heavy tasks that are difficult to perform manually. In this blog post, let’s explore the advantages, types, and frameworks of Automation testing.

Advantages and Disadvantages of Test Automation

There are a few tasks in testing that consume a lot of time and effort when performed manually. Interface testing is one such example. Besides, manually performing software or application testing is not always the preferred way to detect bugs.

Automation testing proves to be a better alternative in such scenarios as it provides the possibility of testing more efficiently. Automated tests run quickly and repeatedly once developed.

However, it is essential to note that automation testing may not always be the best choice. For instance, you cannot find problems with the GUI; automated tests need to be rewritten if there are any changes in the application interface.

An automation testing framework is a platform that integrates various hardware, software, and tools that enable streamlined design and development of test scripts. With efficient test scripts, testers are able to perform an analysis of the detected bugs of the AUT.

QA engineers effectively leverage automation testing frameworks to find objects and sort them so that they may be reused in test scripts, perform the desired fix on the identified objects, and ensure the objects deliver the desired results.

Test scripts are developed based on modules or clusters in a modular automation framework. These are formed by dividing the entire software or app into smaller, self-sufficient blocks. Thus, individual test scripts belonging to a particular module or group are created. These scripts belonging to these isolated modules can be integrated and driven by a master driver script to perform integration testing among the modules. All these are achieved with the help of shared function libraries used while developing modules’ scripts. This automation testing framework adheres to the concept of abstraction, wherein test data is added to the test scripts. Test scripts need to be directly updated if there is a need to test with a different combination of test data. The smaller modules in the framework hierarchically communicate with each other to form a large script capable of testing an entire scenario.

The library architecture framework is similar to the modular framework but provides more benefits. Rather than segregating the AUT into different scripts, identical tasks within the script are combined by function. These functions are placed in a library and are called upon by the test scripts when required. Similar to the case of the modular framework, utilizing library architecture enables greater modularization, leading to simplified test maintenance and higher scalability. Library architecture is highly scalable due to the availability of a standard function library that multiple test scripts may use.

Automation testing frameworks are utilized to execute test cases and decide the output coordinated with user requirements. The testing framework application is constantly independent and is straightforward to expand, use, and maintain.

An automated script saves your group time and counteracts disparities between coding guidelines. It is possible to run automated tests anytime, even when the testers are not physically present at the workplace.

Sometimes, certain areas of the software or application may need updates. Automation testing framework expands the capability to incorporate these things without experiencing a confounded methodology.

Another important benefit of utilizing an automation framework is its adaptability and modularity for application testing. The framework ensures that a significant task is separated into reasonable parts, which would then be reusable as and when required.

Testers do not have to execute test scripts manually whenever there is a need to initiate automation testing. Also, you don’t need to supervise the test scripts. At last, the test result is achieved without observing it once in a while. This saves time and simultaneously increases test accuracy.

Utilizing common library records is not possible in manual testing. By introducing automation software, it is possible to reuse the library records whenever required without creating them every time. If the module is the equivalent, there is no need to create new documents. This saves the need to do a similar task repeatedly and makes the entire procedure proficient.

How can Testsigma Help You Automate Your Test Cases?

Testsigma helps you automate your test cases for all types of automation testing quickly and efficiently. Here are some of its key features:

When Should Test Cases Be Automated?

Despite the immense benefits offered by automation testing, the process is sometimes difficult to implement and deviates from the expected results. Efficient execution of automation testing needs the right skills, experience, thoughtfulness, creativity, and zeal to create ROI-driven strategies and frameworks.

It is recommended to create test cases and scenarios before automating the tests. A good test design helps identify defects as automated tests execute these test designs. The risk involved in moving directly to automation is that you’re only making the script work. In most cases, only the happy flow scenarios are automated. Instead, testers should think of other possible scenarios that may require testing.

One of the critical points of adopting automated testing is the ability to provide regular and expected results. If the success of an automated test is not consistent throughout, meaning the test passes once but fails in another run, it may not be determined the cause of app failure. In case of test case failures, testers must analyze the results to understand the cause of failure and make the necessary fixes.

Outdated tests do not check for essential verifications. Lack of test case validation leads to testers jumping to automation directly without spending enough time on planning and designing good test cases. Always review the test cases for validity and sanity and make sure the tests are up to date.

If automation testing begins while a new app feature is being developed, the tests may need to be updated alongside feature updates. It can be challenging to update the test case with every feature update. Therefore, automating only stable features or less subject to change is recommended.

Automated tests may be run at any layer, i.e., Unit, API, Service, or GUI. Each application layer provides a different aspect for testing. Unit tests are performed to verify there are no bugs at the class level. API or integration testing is performed to achieve functions and classes that may be integrated to work together and may pass data from within classes. GUI testing ensures the user flows and journeys are seamless and as per the business expectations. If the tester wants to test the app functionality, the testing should be performed at lower layers rather than UI. UI tests should primarily focus on ensuring the application or software delivers according to the predefined use cases.

Do Not Aim for 100% Automation

Complete test coverage is impossible since there can be millions of combinations. Creating a reliable automated script takes a considerable amount of time and effort, and it is not practical for testers to automate all the tests. Rather than automating everything, the focus should be on adopting a risk-based approach so that all possible candidates for automation may be identified. Automating the most critical business scenarios is recommended to achieve the full benefits of automation. Also, automating some testing scenarios takes up additional costs and is difficult to maintain since it relies on downstream system checking. The best solution here is to prefer manual testing for such cases.

One cannot overstate the benefits of automation testing. Given the customer demand for new features every few weeks, organizations must incorporate automation testing. Since a terrible user experience will almost certainly get any application uninstalled and downvoted by customers, automation testing plays a critical role in ensuring the desired customer experience. Without it, developing software that appeals to users becomes significantly more difficult.

What are the Different Methods of Automation Testing?

What is a QA Automation Test?

Why is Automation Testing Used?

Automated QA testing facilitates continuous integration, which is essential for business environments that wish to create and deploy quality apps in less time. With automation testing, apps may be developed, tested, and pushed to the live environment multiple times a day instead of stages. The primary benefit is the significant cost and time savings for regression testing, which is not possible with manual testing.

What is the Difference Between Selenium and Automation Testing?

Selenium: Selenium is an open-source framework for automated software testing. Testers can use the programming languages of their choice (Java, C#, Python, etc.) to create scripts for Selenium testing. Different sets of tools featured in Selenium are Selenium WebDriver, Selenium RC, Selenium IDE, and Selenium Grid. Selenium testing is used to perform automated tests for web apps across a wide range of platforms, OS, and browsers.

Automation Testing: Automation testing is the process of performing test cases without the need for any human intervention. It is performed with the help of specialized testing tools and frameworks such as Testsigma. These tools are specially designed to reduce or eliminate human supervision while maximizing the scope of testing. Automation testing plays a critical role in CI/CD pipelines, where testers can perform tests that are repetitive and prone to human error.