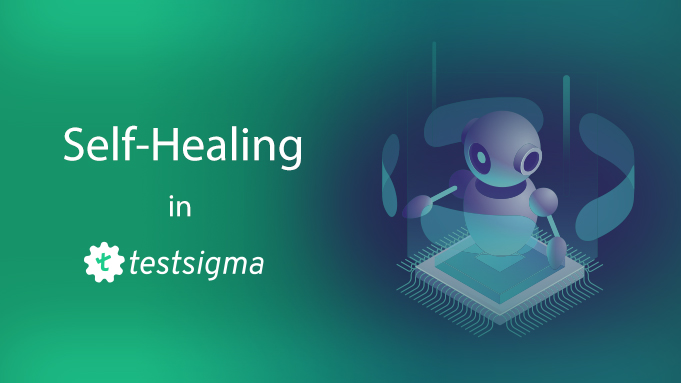 Tests that do not require maintenance | Self-Healing in Testsigma

The number of changes in the testing code is proportional to the changes that the developer makes in the application. For example, if  ‘id’ or ‘class’ attributes of an element on a web page is changed by the developer, then the existing automated test script need also be changed. This may sound simple, but if there are many such changes in the application, this takes a lot of time and effort for the testers to modify tests and run them.

This is where the AI-driven approach of Testsigma comes to help.
The AI detects abnormalities in the existing code and automatically fix them without human intervention. Self-Healing in Testsigma is done with the help of AI algorithms that automatically fix changes made to the source code and prevent tests from failing.

So, if you have written a test step to click on a particular element with id as “Username”, the same test case will continue to work even if the developer changes the id to “Userid”.

As shown in the above image, the id of the element is ‘Username’ at the beginning. The test passes here(green check). Let’s assume that the developer shortens the id of  the element to ‘Userid’. This changes the UI Identifier. The change in UI Identifier causes the test to fail since the element(Full Name field) cannot be located now.

This is what happens in the case of conventional testing frameworks or tools. The tester has to make changes in the UI Identifiers each time there’s a change and becomes an extra effort to maintain them .

With Testsigma’s Self-Healing feature, the UI Identifier in the Test Case is automatically corrected when the developer changes the ID attribute.

As you can see in the above image, the test passes even after the change in id.

Testsigma’s AI is smart enough to locate the element despite the change in the attribute and modify it to match the change made in the source code , tests without Self-Healing fail in such cases.

Self-Healing saves the tester’s time and effort by identifying the change and updating the test cases for every small change in the UI. So, for Agile development teams, Self-Healing is a very handy feature to have and saves time and money.


Check out how Testsigma identifies changing attributes and self-heals!
Schedule a Demo

I am a FullStack Developer, I constantly work on improving my technical and developing skills. I keep myself updated about my field of work and take up challenging tasks of solving complex scenarios by which I gain experience and help my Team reach the set goals. I Am Currently Working as a Developer at Testsigma(2019 - Present), I have worked on angular js , angular frameworks in frontEnd and Spring, and Springboot on the Server Side, I have also tried my hands-on testing Frameworks like Selenium.