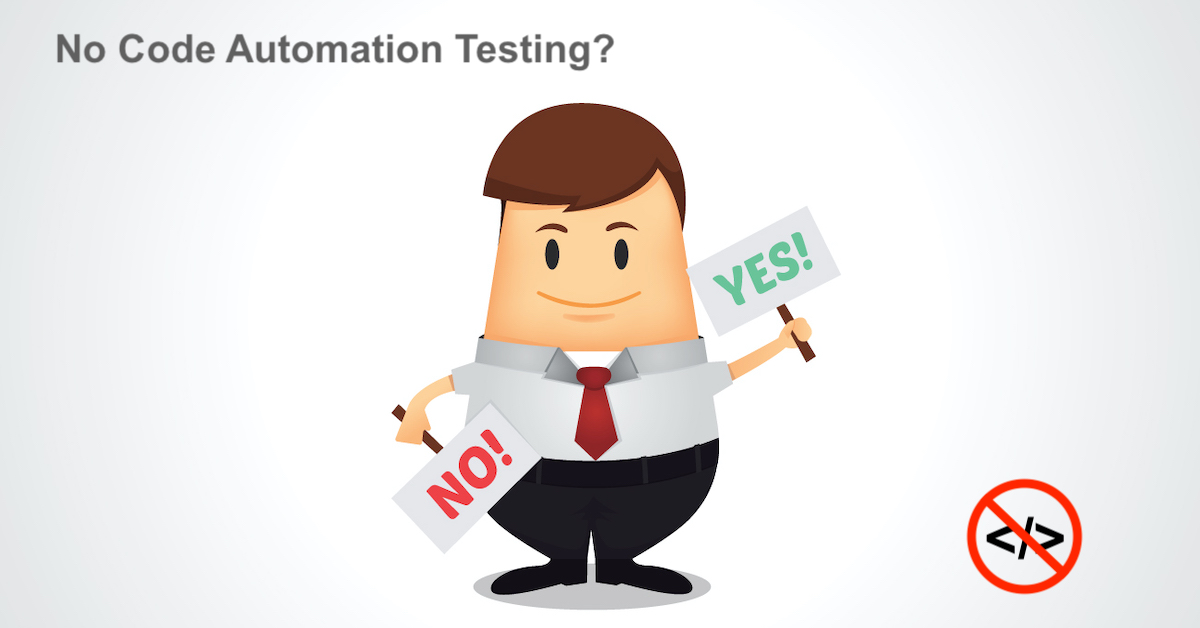 No code automation testing: When to use and when not to use

Having a coded approach to test automation has its benefits. It certainly does give you the power to be extra flexible in terms of test case creation. But with it, it also requires a lot of investments from you – in terms of time and resources.

Hence, you need to decide if that is really the power you need because, in the end, you need automation that gives you returns on your investment(ROI).

1. Most of the test cases you want to automate don’t require interactions with direct code

No code automation testing means that you won’t be dealing with code. So, the first condition that should be fulfilled when you go for one is – you have test cases that don’t interact with code directly.

2. When you have tried automating the most important scenarios with a no code automation testing tool and it works for you:

Choosing the right tool for test automation is a crucial step for a software development team. It is because this tool is supposed to help them in the long run. So, it makes sense to first take a tool and try it for some time to really know if it would work for you in the long run.

Once, the first 2 conditions are met, below are other conditions when you can use a no code automation testing tool:

3. Too many repetitive regression tests

In the case of Agile and CI/CD, the regression testing’s frequency is increased manifolds as compared to the traditional software development. Convert your manual test cases into automated ones using the ease of no code automation testing tools in no time.

The tool selected for this purpose is very important here because we want it to support all the testing activities we are going to perform. Our no code automation testing tool requirements are project and testing type-specific. The tool should fulfil those needs.

An e-commerce application has payment modes like credit/debit cards and cash on delivery only. Now they have added a new payment mode – net banking and e-wallets.

The regression tests need to ensure that the existing payment modes are still working and are not impacted due to the code changes.

During continuous testing, a set of automated tests are triggered whenever code is checked in. Continuous development works on the principle of continuous feedback and improvisation. We can never imagine this being done manually, never!

We need test automation in place for the same. With no code automation testing, the process of test script creation and maintenance is hastened and it contributes to faster delivery. Read more here.

5. There are some manual test scenarios, that are now stable and pass every time

Every project has some test scenarios which are stable and are running fine manually since many releases. Pick these test cases for no code automation testing, because their behaviour has been the same for all the past test releases.

We know they are providing consistent results in every test run. So, if they are automated using no code test automation, it will reduce the manual testing time of testers involved.

For the same e-commerce application, the registration module is working fine for the past many releases. There have been no changes to this module and the test cases are stable.

Hence, this can be picked up for no code test automation easily because the registration process is high-priority as well as stable.

6. There many complex test scenarios that take up a lot of time for testing

There are test cases that have complex mathematical calculations involved, which are prone to manual error and are time-consuming. Testers always want to get away from such calculative tasks because they need precision and focus. They are ideal for automation testing, however, manually coding the test scripts (formulae) for the same can again cause calculation errors.

No code automation tools ease this burden of writing code for all the calculations. Because we can just mention the formulas in natural language and it will create the test script accordingly.

E.g., loans module. During manual testing, these calculations take such a long time and are tedious to understand the steps involved. We need experts to understand and perform such calculations. This can be bypassed using a no code automation testing tool such as Testsigma.

Try Testsigma for no code automation testing for free

Today’s world is revolving around data, software testing is not any different. Every software works on feeding some input data, processing, and providing the expected output.

The data can be user data or maybe coming from an external application. Usually, for data-driven testing data is fed into the application from data sources such as Excel sheets, database tables, JSON files etc.

We cannot imagine doing it manually. With the traditional automation scripting tools, it is one of the complex scenarios to write code for. It involves reading the input data from an external data source, feeding the read data into application into the correct fields, and then writing the test results back into an external data source.

It requires an expert level of coding, huge amounts of time, test data management, and code maintenance are quite tedious. The no code automation tools make this complex testing type super easy to set up, execute and record the test results. You are good to go with just a few clicks, read here how?

8. You need to perform cross-browser testing

Cross-Browser testing ensures that the application is working seamlessly functionality and performance-wise on the below combinations:

No code automation testing tools usually come action-packed with cloud-based test labs. Where you can choose and use 1000+ devices just through a few clicks.

An e-learning application was available on web browsers for Windows only. Now they have released it as a mobile app, this will require thorough testing on both web and mobile.

Manually this cannot be handled, it will require a test lab setup either locally or with the help of a no code automation testing tool. Choosing a cloud-based tool where the environment can be scaled up and down with ease is the best option.

9. To save time, you need to run tests in parallel

For fast test execution parallel tests are the most powerful option as it enables running multiple test cases parallelly. The no code automation tool helps to execute parallel tests on local devices, cloud-based labs, and third-party tools. Since most of them are cloud-based with a huge number of devices and platforms available at any time.

Data-driven and cross-browser tests are perfect for parallel execution.

When not to use

1. You want to write test cases that interact with code directly

2. You have inconsistent or flaky tests

Flaky tests are the tests that inconsistently pass and fail during test executions. This causes frustration for the testers because testers cannot reach a consistent test result.

An interesting presentation by Google about their internal tests says that 84% of the test transition from Pass to Fail was due to flaky tests. They spent 2-16% of their resources in re-running the flaky tests. This says a lot about it.

Reasons for inconsistency can be a dependency on test order due to global variables/states, asynchronous waits, concurrency, etc. Therefore, it is required to identify and fix the reason for these flaky tests first and then automate them.

3. Testers spend most of their time performing exploratory tests

They require out-of-the-box thinking and are executed on the fly by testers. They are not written in advance and therefore, they cannot be automated using a no code automation testing tool.

4. Application has frequent changes in UI

If the application is going through frequent changes in UI due to any reason, they are not ideal for automation testing. Because every time there will be changes in UI, the test scripts need to be updated accordingly.

5. When you are only running usability/ acceptance tests

The look/feel and intuitiveness of an e-commerce application should be tested by humans. The customers will be from different backgrounds and need not be technical.

Therefore, the different workflows such as adding to cart, payment and selecting many delivery addresses, etc. should be intuitive for a naive user too.

No code automation testing is not record and playback testing anymore. With AI/ ML, NLP, self-healing, maintenance, robust reporting, third-party integrations it has emerged as a complete automation testing solution. It is cost, effort, and time effective as compared to the traditional automation tools.

The decision about what test cases to be automated and what not is really crucial. As it will drive the success of the whole automation process of the software.