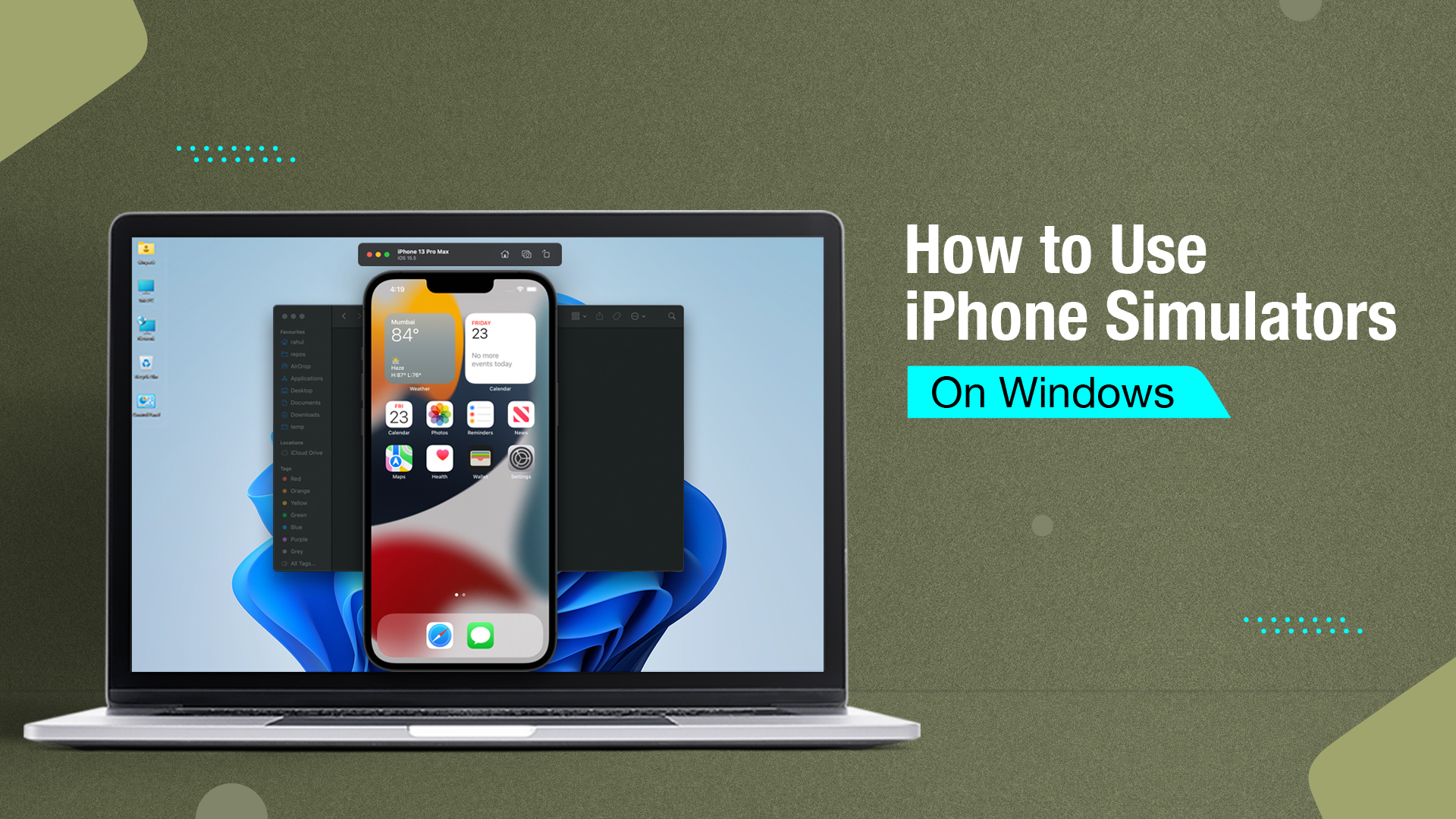 How To Use iPhone Simulators On Windows

At ground level, simulation imitates a process or a system through a model. These models are usually software-based and represent the key characteristics of the chosen system you want to imitate. As a result, the simulation collectively represents how the system evolves with respect to various scenarios and times.

From testing your apps for one operating system on another to creating a virtual reality environment for learning how to drive a car – simulations are used in numerous use cases. When testing processes on the real system are too dangerous, expensive, or time-consuming, simulation software is the best option to move forward with.

Not only are such software less expensive, but they also help streamline repetitive mundane processes, evaluate long-term impacts, and gain insights from the simulation. The outcomes contribute significantly to the improvement of the system.

Similarly, we use an iPhone simulator (also known as iOS simulator) on windows to run applications designed for iOS on Windows systems. It helps the developers test their apps effectively, and other users use iOS platform apps on Windows.

Moving forward, we will discuss what simulators are, why you need an iPhone simulator on Windows, and how you can set up one to get started.

You already know that applications require operating systems to run. Now, as we have numerous operating systems available for computers and smartphones, each of them has a unique architecture. This is where simulators come into play. When it’s not feasible or easy to test a process in the original environment, virtual machines replicating the required operating system are used, which are nothing but simulators. Hence, developers and testers can run their applications on a specific operating system without actually buying or installing it.

For example – a developer, who’s building iOS apps and has no access to an iOS device, needs a suitable simulator for installing, testing, and executing applications programmed solely for Apple devices.

iPhone or iOS simulators are primarily used for 2 use cases: testing and debugging apps without having access to an Apple device or using iOS applications on other operating systems. Developers, testers, and QA engineers usually deal with the first use case, while the end users utilize the second through simulators.

How Does an iOS Simulator work?

To imitate a device that runs on iOS, an iOS simulator is used. It should be noted that an iOS simulator can be used to test your app’s behavior on top of your existing operating system. So a simulator can mimic the configurations and behavior of a real device – but it doesn’t reflect the exact performance of the app due to differences in hardware capabilities.

Why and When Do You Need an iOS Simulator on Windows?

Suppose you have developed an iPhone app, iPad app, or Mac application. Now, you have to ensure it works accurately and offers a smooth user experience. If you don’t have an iOS device or have an older version – you have to use an iOS simulator as it’s the most feasible option.

The potential applications of simulators are limitless. As a developer, tester, QA, professional, gamer, or simply user, you can do much using an iPhone simulator on Windows.

Here are the top 4 applications of iOS or iPhone simulators on Windows:

One of the primary utilization of an iPhone simulator on Windows is app development. If you’re developing an iOS application (largely for iPhone), it’s not the optimal approach to execute, install or update, and test your app each time on a real device. Plus, it’s not feasible in many cases too.

Software development is a multi-staged process. Each line of code is critical and can make or break your application. Having a simulator to check the output after each minor development will help you save hours spent while doing it hundreds of times on your iPhone. All it takes is a few seconds on simulators to reflect your code changes, a lot more convenient and efficient option for developers.

We talked about how using a simulator is advantageous over executing and installing your developed app repeatedly on a real device. The same goes for testing too. Regardless of whether you’re a developer or tester, you do mobile testing every day. It’s your responsibility to ensure the end product runs accurately and smoothly, serving a great user experience.

Testing an iOS app using an iPhone simulator on Windows is not only faster but also significantly easier for your team. How? Testing on real devices requires you to install the app again in case of an update. Imagine testing all the features for innumerable test cases – your testing will get extensively delayed even after intense efforts.

3. Using an iPhone app on Your Computer

A majority of iPhone applications do not have counterparts for Windows systems. So accessing iOS apps made for iPhones is another important use case of iOS simulators on Windows. You will find numerous interesting apps for design, communication, photo and video editing, work management, and more on iOS platforms. Missing out on the useful functionalities is not a great choice when you can make those apps available through iOS simulators.

It’s user-friendly, pocket-friendly(most apps are free), and easily configurable too.

Let’s not underestimate the popularity of mobile games. 25% of the total apps downloaded on iOS devices are games. Having a chance to play your favorite iPhone games on Windows can be a fantastic experience. While not all PC games are as good and inexpensive as mobile games, iOS simulators for Windows solve this for you.

Accessing iOS games using Windows systems also means you can enjoy them on a bigger screen.

We discussed the various applications of an iOS simulator and when you absolutely need one. But why should you use iPhone simulators on Windows? What are the advantages of simulators over executing the same processes on original systems? Let’s find out.

How to Install and Run Applications using iPhone Simulator on Windows?

We covered what iOS simulators are and why you need one. Now for installing and running applications using iPhone simulators on Windows, there are three approaches you can follow:

Let’s go through each of these strategies.

One of the most convenient and straightforward solutions for running iPhone apps on Windows is to use a cloud-based iOS simulator. This approach basically allows users to run iOS apps on the Windows platform without any installation.

The cloud-based simulator service provider takes care of the resource requirements for running applications. As and when the processing needs to scale up or down, simulation resources are allocated accordingly. Additionally, all the aspects related to storage and maintenance of the application are taken care of by the provider too.

Testsigma lab provides instant access to a pool of iOS devices, including multiple versions of iPhones and iPads (tablets). Sign up for Testsigma, and you can get started.

If you’re a developer or tester and want to test your apps on Windows, going with iOS simulators having IDEs attached is a great choice. Native development is firmly supported by iPhone simulators in IDEs such as Xcode. As a native developer – you can run your apps without using any third-party tool.

Xcode is one of the most popular IDEs as it’s Apple’s official platform for building, testing, and debugging iOS applications. Once you create an Xcode project, you can easily access any iOS simulator.

Please note: Xcode can only be used by developers or testers only. End users who want to use iOS apps on Windows cannot use IDEs for iOS simulation on Windows.

One of the most renowned applications in this category is iPadian, a simple iOS simulator. You can just download it and start using iOS apps on the platform – as easy as that. With iPadian, users can mimic the in-app behavior of an iPhone or iPad in a cost-effective way. The plans start at $25, and it has over a million active users.

People using iPadian or any other similar solution are mostly not developers. If your aim is to simply access iOS apps without a real iPhone or iPad – iPadian is good enough for you.

Although you get to use iOS apps and access their functionalities, the experience is far different from that of a real device. Even the presentation and UI are not like other simulators, which basically mirror iPhones. So the original experience and feel of an iPhone are missing.

Just so you know, you cannot connect to the Apple app store and use the iMessaging functionality.

Configuring a real device to continuously test and develop your applications is a mundane task followed by prolonged repeated workflows. Multiple solutions are available to run iOS applications using iPhone simulators on Windows. While using IDEs with built-in iOS simulators is an option for developers and testers, it’s resource-heavy and takes time to set up. Using a cloud-based iPhone simulator is the optimal approach in terms of ease, convenience, and cost.

Testsigma offers a complete iPhone simulator solution for developers to test their apps on Windows seamlessly. With a wide range of cloud-based simulator services, you can test your iOS apps on iPhones, iPads, and all the different versions of macOS.

A growth enthusiast, Vivek is a SaaS writer and a passionate marketer. He believes in the power of technology and claims that words when put right can help any brand prosper organically.