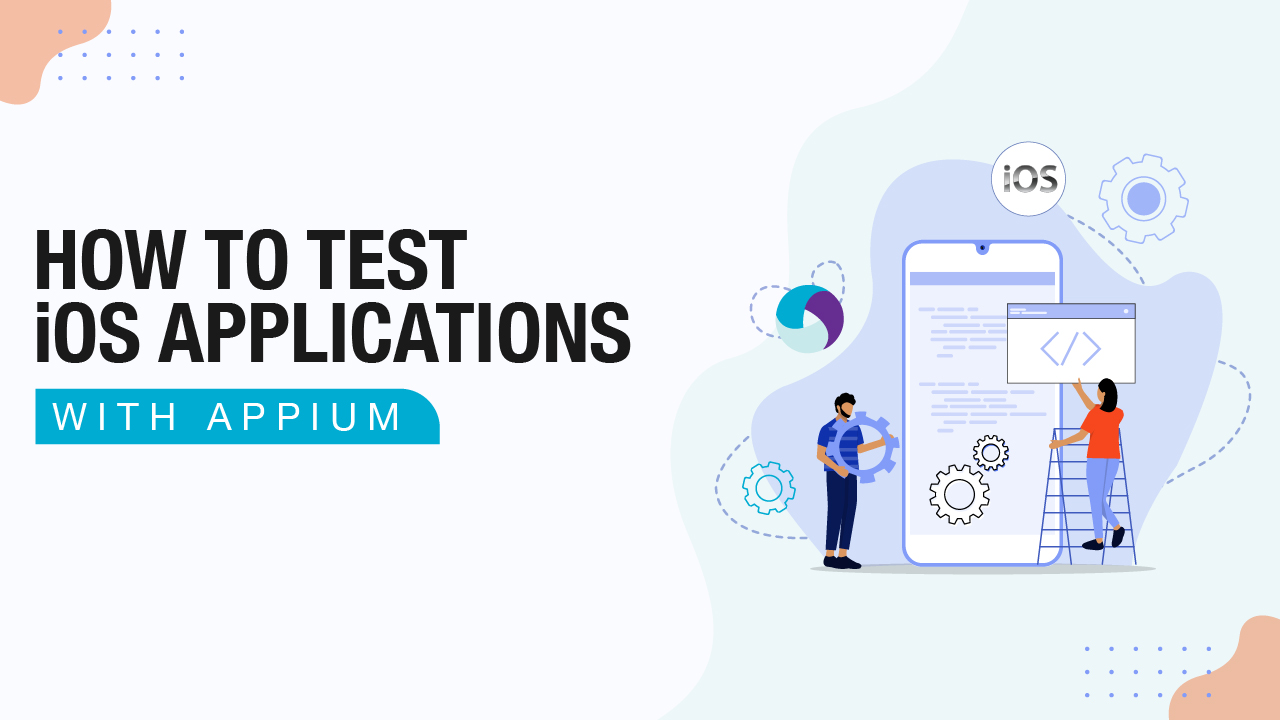 How to test iOS applications with Appium

Today’s iOS application market is as competitive as never before. In 2022, active iOS users account for more than 1.2 billion, with 2.2 billion units sold worldwide. For a developer or an organization, that means they have got a market of over 1 billion users if they are planning to upload their application to the App Store. And how important does its quality need to be? In 2021, a study revealed that iPhone users spend more than 39 hours per week operating their phones. On the financial side, these users spent more than $85 billion on in-app purchases in 2021.

These statistics show that we have a lot of users, a lot of applications, and a lot of money when it comes to iOS. In other words, if the iOS application quality is compromised, all the work of all the departments will be wasted. How will the user analyze the features when he is not able to navigate to them? The only way we can look at the quality with evident metrics and in a range of parameters is through iOS app testing before releasing it to the end user. And what would be the best way to do that apart from a framework that is developed and used just for this purpose?

“Is native app automation missing from your tool belt? Problem solved.” – is what Appium brands itself on its official website. From bringing open-source culture to application testing to providing a cross-platform environment for writing tests, Appium seems to be one of the best choices when a mobile application needs scrutinizing.

For testers opting for Appium, you do not need to worry about the type of mobile application you are releasing to the end user. Be it a native, hybrid, or mobile web application, Appium’s strong features do not restrict the tester in a single direction. The tester is free to choose the tool he likes and the language he prefers to write test cases that do not even require an SDK.

Along with this, technically, Appium offers a few more advantages.

Why use Appium for app testing?

Apart from being cross-platform and open-source, there are a few more reasons to love Appium and prefer it as a framework of choice.

In addition to these technical advantages, the tester also needs to keep in mind the importance of an “automation testing framework” for their mobile apps. Automation eliminates repetitive tasks that may be repeated just a couple of times a year earlier. But now, with Agile methods adopted, we can witness a release every fifteen days or so in the mobile app department, among which WhatsApp is a prime example.

This makes our preference towards automation testing even stronger, and hence we move in the direction of frameworks that may ease out the pain of automation and manual simultaneously.

How to install Appium to test applications?

To run the tests using Appium, we first need to have the framework installed on the system with all its libraries and capabilities. This can be achieved in one of the following two ways:

For your convenience, we will look at both of them. However, NPM being the popular choice among the two, we will carry on with the next steps using the same.

NPM (Node Package Manager) is used for JavaScript-based downloads. It works through the command line interface and fetches libraries and setups from its cloud repository called npm registry. When we execute the NPM command, these packages are fetched, downloaded, and installed from a single command. It is a more powerful, easy, and popular way of installing packages such as Appium.

Since npm requires a JavaScript-based server, we need to download and install Node.js first if we are installing Appium using NPM. This can be either done through their official website or using Homebrew by running the following command:

Once NPM is installed, the tester can run the following command to install Appium directly from the command line using the node package manager:

Alternatively, you can use nvm (Node Version Manager) from their official repository link. This is a Node-specific manager and therefore a simple command as:

will install Node.js version <version> directly. For the LTS version, you can run the command:

Testers and developers who would like to bypass the CLI and package managers for installing Appium can do so by opting for installation through the Appium desktop.

Appium desktop is the direct installation using binary files and proceeds similarly to how any software will be installed graphically. This can be done by downloading the binary from their official release page. One of these two methods will bring Appium to your local system.

How to install driver setup for Appium?

Drivers help testers gain access to specific technologies developed by the operating system provider (mostly) that help test the application more efficiently. Since this post is specific to an iOS application, we will be inclined towards a demonstration of XCUITest Driver only. However, you can refer to the following drivers for different automation needs:

Let’s see how we can start testing iOS apps through Appium with XCUITest Driver.

A brief guide to setup XCUITest driver for Appium

XCUITest driver is used for executing tests on iOS devices using Appium. The download can be done from their official repo or through npm by running the following command:

If you are comfortable with XCTest provided by Apple, then the driver will feel just as familiar because it uses XCTest for native testing. Apart from this, there are a few prerequisites that a tester might need to go through before starting the actual testing part.

The following pre-requisite will help set things up quickly for a tester.


Keeping all these things in mind and installing the software mentioned above will construct a good infrastructure on the local system to commence testing.

How to start the Appium server?

After setting up, you can start the Appium server by just typing “appium” in the command line. However, if your installation was not through npm but through Appium desktop, you may need to open the application from the shortcut created on the desktop or from the menu list.

To run your iOS tests on Appium, we need to download a few extra modules to help us build and execute the tests. The modules defined here are necessary for testing, but these specific modules need not be downloaded. If the work done by module A can be done by module B and you find it suitable, you can move ahead with that. Also, just so you know, these modules are specific to iOS-based tests. If you are looking to test Android applications, you may need a different set.

First, we need carthage to manage dependencies. This can be installed as:

Next, we need software that can talk to iOS devices and native protocols. This can be achieved through libimobiledevice. The module can be installed as:

Please note that these installations are demonstrated using Homebrew. However, you can do the same using npm also. Once everything is installed, we are ready to create and execute our first iOS application test.

A basic iOS test is very easy to construct and run in Appium. Before that, first, we need to declare the desired capabilities as follows:

Then, we need to make sure that webDriver is connected, initialize its instance, and set the remote session to connect capabilities on port 4723.

Port 4723 is the default for Appium. The tester can change it by passing the -p flag with the port number while initializing the Appium server.

Next, we write the code to delete the driver that will be called after @Test is executed.

The @Test code to locate an element can be written as follows:

In this section, you can write the test logic as per your requirement and execute tests accordingly.

Once you get hold of this, the test can be executed on the same port on which the server was started.

How to automate an iOS app on a real device cloud?

While Appium is one of the most popular mobile test automation frameworks for iOS as well as Android, a tester still needs to download and install the iOS devices. Not only that, the devices available through the Appium library are not real devices but simulators and emulators. While they have their own advantages, testing should be performed on real devices even if done partially so.

For this, manually acquiring iOS real devices could prove to be extremely expensive and not feasible when it comes to maintenance. A better way is to use a real device cloud where tests are yours, but infrastructure and devices are theirs.

Testsigma is one such cloud platform that lets you access real iOS devices for testing. As a tester, all we need to do is sign up on the platform and execute our tests directly. But do we really need Appium when we have Testsigma?

Appium demands two primary things – expertise in programming language and expertise in third-party modules. In this post, we downloaded four-five modules even though the tests were so simple. Besides, it can take a lot of time and may filter out suitable candidates who might be good at testing but not in programming.

The solution to this is Testsigma. The platform executes the tests in a codeless testing paradigm, meaning it just requires the testers to write tests in English rather than any language. Along with it, Testsigma comes with a lot of integrations and a mobile recorder that can convert actions into test cases. So if a tester presses Log In button, it is converted to “click Log In” automatically.

These tests are reusable and can be worked on any device any number of times. To know more about this, you can refer to Testsigma vs Appium guide and let us know any feedback here.

What things can we keep in mind before and while running Appium tests on iOS devices?

Appium is a cross-platform application testing framework that is open-source and powerful enough to execute all types of tests a tester wants. And shouldn’t it be as commanding as it portrays? Given that the iOS application market is always rising with billions depending on in-app purchases, applications should not only solve a good problem but also work swiftly without any glitches.

Appium seems to solve this problem by offering things such as testing the same app which is shipped etc. In this post, we highlighted the need for Appium and how it can be installed on the local system. Later, we executed a simple test to demonstrate the working and what things a tester might need before starting the testing part.

Wrapping this post with best practices to follow, I hope this post serves you well in your iOS app testing projects using Appium or real device cloud. For any suggestions and queries, let us know in the comment section. Thank you for giving this post your valuable time.

How to use Appium for iOS on Windows?

Appium can be used by Windows users to test iOS by installing it either through a package manager or through Appium Desktop. Popular package managers such as npm and brew will install Appium to the CLI. On the other side, Appium desktop provides a graphical interface for the same.

What are the disadvantages of Appium?

As popular as Appium has been in the past decade, comparing it with the latest testing trends, we can uncover a few disadvantages:

What platforms does Appium support?

Appium is a cross-platform testing framework with support for iOS, Android, macOS as well as Windows.