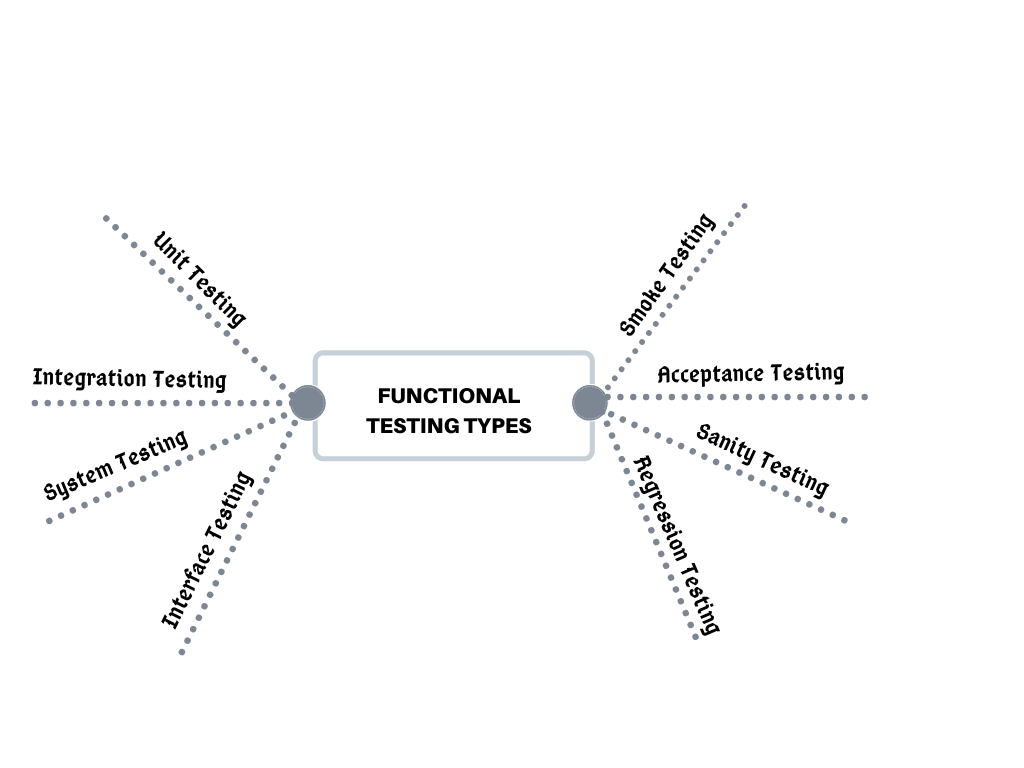 According to Wikipedia, “Functional testing is a quality assurance process and a type of black-box testing that bases its test cases on the specifications of the software component under test. Functions are tested by feeding them input and examining the output, and the internal program structure is rarely considered.”

Functional testing is a Black Box technique in which the output is validated against the input provided to the application. Every functionality of the application is tested according to the business requirement, and therefore the name Functional Testing.(Refer here)

Get the list of different functional testing types below.

i. With this functional testing type ,smallest functional and testable unit of code is tested during unit testing.

ii. Mostly, performed by developers, since it is a White-Box testing technique.

i. Two or more unit tested components of the software are integrated together, and tested to validate the interaction between them is as expected.

ii. The communication of commands, data, DB calls, API calls, Micro-services processing is happening between the units and there is no unexpected behaviour observed during this integration.

There can be three approaches for Incremental Integration Testing:

1. Top-Down Approach: Modules from the top level of either control flow or according to the system design are tested first and the low level of modules are integrated incrementally. If a low-level module is not available, a stub is used.

3. Hybrid Approach: Combination of Top-Down and Bottom-Up approach. Testing starts at both the levels and converges at the middle level.

i. A part of integration testing; the correctness of data exchange, data transfer, messages, calls and commands between two integrated components are tested.

ii. Communication between database, web-services, APIs or any external component and the application is tested during Interface Testing.

iii.  There should not be any error or format mismatch during this data or command communication. If any such problem is encountered, that needs to be corrected.

i. All components of the system are combined and the system is tested for compliance and correctness against the requirement specifications (Functional or System).

ii. It is a Black-Box testing technique which validates the integrated system.

iii. It is performed before the User Acceptance Testing (UAT) in STLC(Software Testing Life Cycle).

iv. System Testing is performed in an almost real-life environment and according to real-life usage.

i. After some enhancements or code fixes by developers, it becomes very important to run the regression test suite. Regression is run to ensure that these code changes have not hampered the existing working functionalities or any new defect is not injected in the code.

ii. Regression test cases are the subset of existing Functional Tests, which cover the major functionalities of the system.

iii. Regression cases need to be updated, added and deleted according to the application changes.

iv. The Regression test Cases are the best candidates for automation testing because they are run often and require time for execution.

v. Regression test cases to be run can be selected in 3 ways below:

If you are at a stage where you find yourself spending too much time in executing the same regression test cases multiple times in a short duration, then you need to start thinking about automation. If you are not sure if you need to take up automation, this article can help : Why Automate Regression Testing in Accelerated Agile Delivery Cycles

i. After development, when a new build is released, Smoke Testing is performed on the application to ensure that all end-to-end major functionalities work.

ii. Smoke testing is usually done for the builds created during the initial phase of development for an application, which are not yet stable.

iii. During testing, if any major functionality is not working as expected then that particular build is rejected. Developers need to fix the bugs and create a new build for further testing.

iv. After successful Smoke Testing, the application is ready for the next level of testing.

i. Sanity Tests are selected from the Regression Test suite, covering major functionalities of the application.

ii. Sanity Testing is done on the new build created by developers for a relatively stable application.

iii. When an application successfully passes the Sanity Testing, it is ready for the next level of testing.

i. During Acceptance Testing, the acceptance of the application by the end-user is tested. Aim of this testing is to make sure that the developed system fulfils all the requirements that were agreed upon during the business requirement creation.

ii. It is performed just after the System Testing and before the final release of the application in the real world.

iii. Acceptance testing becomes a criterion for the user to either accept or reject the system.

iv. It is a Black-Box testing technique because we are only interested in knowing the application’s readiness for the market and real users.

Business Acceptance Testing is done to ensure that the application is able to meet business requirements and goals.

Regulation Acceptance Testing is done to ensure that the developed application does not violate any legal regulations put in place by the governing bodies.

The importance of testing is clearly conveyed in the words of Robert Webb, CIO of Etihad “I know that software testers can make the company more profitable, make it safer, and help it grow faster. If they make your testing faster and get your new apps out there, you can be more competitive. And if they can do that while lowering costs, that’s remarkable.”

If you are looking for implementing test automation for your web and mobile apps, functional tests for stable features become the best candidates. Testsigma, a cloud-based test automation tool is a tool that has made the automation of such test cases very easy and inclusive, as it allows automation to be done in simple English – no coding required.

Is Selenium Used for Functional Testing?

Selenium can be used for automated functional testing. Every organization wants to cut the expense of manual testing and has thus begun to use Selenium. Selenium is not a single tool; it is a collection of four tools: Selenium IDE, Selenium RC, Selenium WebDriver, and Selenium Grid. It is well known for facilitating rapid, repeatable web-app testing, allowing developers to publish new updates more quickly and confidently.

What is Functional Testing in API?

The functional testing in API thoroughly tests from start to finish. Functional API testing is necessary to ensure that your APIs and apps work properly.

A Detailed guide on the differences between functional and regression testing