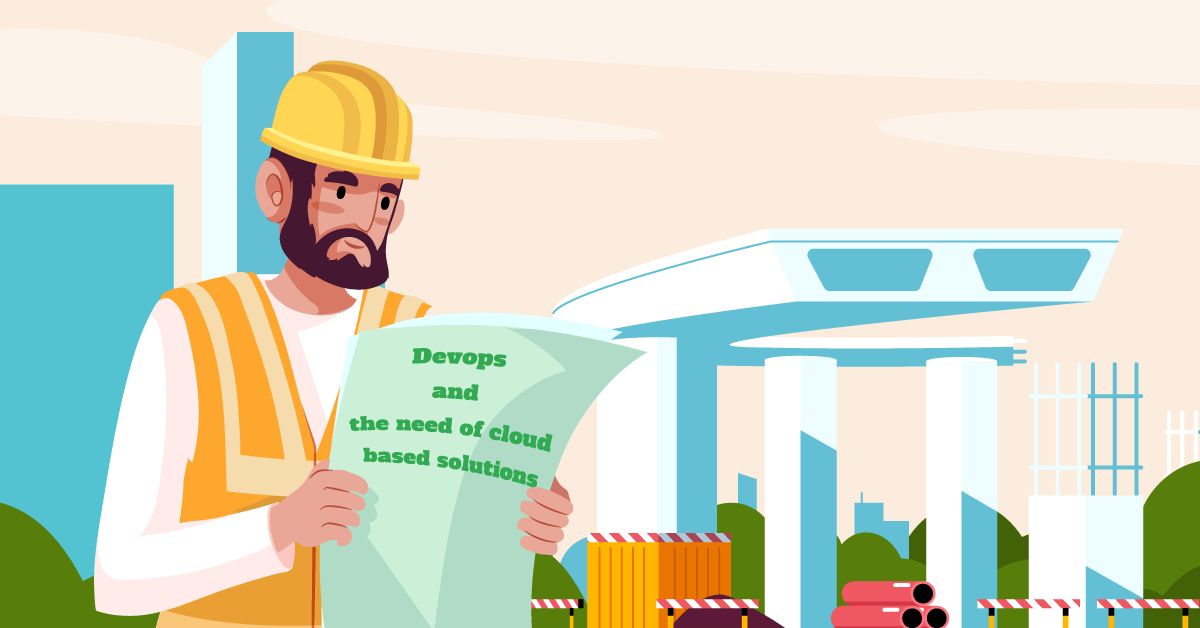 DevOps and cloud-based computing have existed in our life for some time now. These both can be regarded as the latest techs in the arsenal of information technology.

Thinking back on how SDLC started and what it is today, the only reasons for its success can be accounted to efficiency, speed and most importantly automation – DevOps and cloud-based solutions can be considered major contributors here (after all DevOps is 41% less time-consuming than traditional ops).

DevOps is a casket that contains automation as its basic principle. A process that was developed to automate the processes from build creation to deployment and maybe everything in between. Today, we are here to talk about the successful amalgamation of DevOps and cloud-based technologies that is amazing in itself.

DevOps and cloud-based solutions mingle in such a synchronous manner, it seems like they were developed to support each other even though this is not true in any aspect.

With this post, we will throw some light on this symbiotic relationship between DevOps and cloud-based solutions and how this is affecting the market and a product as a whole.

Why Opt For Cloud-Based Solutions and DevOps?

As a developer, while interacting with other industry professionals, I have found a few people sceptical about merging cloud-based solutions with DevOps. Cloud solutions have seen tremendous growth in the past five years:

With reasons distributed throughout the post, a lot of them think that both of these technologies are meant to be separate rather than together. While the bottom line is that they are mistaken, the following reasons would support my argument:

Cloud-based solutions are extremely fast when combined with DevOps. DevOps on their own are meant to slash down the time taken from building a patch to deploying it on the servers. Cloud computing solutions work as a catalyst in this process due to the easily available high processing power of the cloud, resulting in faster deployments.

DevOps is not a single system, rather it is a combination of many processes – testing, deployment, production, etc – thus, it’s better termed as a ‘distributed infrastructure’. Cloud-based solutions help to easily centralize all the distributed systems and processes and can be managed from the same place anywhere, anytime.

Cloud-based solutions are extremely cheap when compared to building and maintaining a DevOps infrastructure on-premise. A survey of 1300 companies concluded that 88% of employees believe cloud computing saved overall costs.

Cloud-based solutions often charge based on the usage of resources (such as running pipelines in our scenario) and not a fixed price (not all though). The cost is comparatively cheap and you only pay when you run the pipeline, which is perfect!

Cloud-based solutions are equipped with all the necessary (and required) resources in their system. This reduces a lot of overhead that could have been caused while maintaining DevOps on-premises.

Setting up DevOps on-premise would mean setting up a big infrastructure to maintain it. Such systems take time to build and costs money which can all be saved by going towards the cloud-based approach.

While exploring various types of tools (discussed later), you might wonder if they differ a lot in their work. This is because their base principle is different and hence they fall in one of the four categories of cloud-based solutions.

Infrastructure as a Service (IaaS)

Infrastructure as a Service is the term used for those cloud-based solutions that provide complete infrastructure to the users including all the overheads, hardware, and networking facilities. Whatever the user’s needs are, they can be allotted to them such as 8GB Ram etc.

As a user, you just need to pay for the services, install low-level requirements and set up the networking. These may include operating systems and other software on the machine.

Please note that IaaS “provides” the infrastructure and does not “set it up” for the user.

Platform as a Service (PaaS)

A little more up the hierarchy in cloud-based solutions is the platform as a service. PaaS not only provides the infrastructure (as in IaaS) but also the framework to build, test and deploy complete software on the cloud.

As a user, you don’t need to work too much on the setup and building everything by individual services as you would do on IaaS. Just a few instructions will set up everything within minutes including the complete network management in your system.

Software as a Service (SaaS)

Coming up one more level in the hierarchy is the Software as a Service (SaaS) cloud-based solution. In SaaS, you don’t have to develop the software but use the complete software solution ready to be used. SaaS does not need you to manage hardware or other requirements such as OS and middleware.

SaaS-based cloud solutions generally come in different strengths with different pricing based on the user requirement. You can learn more about SaaS through this link. One such example of SaaS for test automation is Testsigma.

Function as a Service (FaaS)

The latest addition in cloud-based solutions is function as a service (FaaS). FaaS takes the game one more step ahead and frees the architects and developers from server and infrastructure responsibilities. With FaaS, the user just needs to apply a function to the platform which provides the minimum required structure at first.

The new instances are scaled as per the function and the user is charged accordingly. For example, as the traffic increases, you can allocate two more machines to a particular zone. This is also called serverless computing in general.

When do you need a cloud-based test automation tool?

Some have the money but the people are not skilled. Some have a perfect team but no cloud experience. Some have team and experience but no money in their hand. Therefore, before quoting the cloud-based automation tool in your monthly expenditure, think back in retrospect.

To help you out in the same regard, an excellent blog by Sunaina is crafted just for those who are not sure when to go for a cloud-based test automation tool. These 6 signs will help you in the process and make an intelligent investment for your project, software, or company.

How to select a cloud-based test automation tool?

Cloud-based automation tools are plenty in number. Even though you can narrow down your selection to one of the four types of cloud-based test automation tools, each one of them still comes with many options. So, how do you select one of the choices that are presented to you on the internet?

The first and the most obvious parameter to consider is the business requirements and if that cloud-based tool can fulfil them or not. Sometimes people change their strategy based on the functionalities that a tool has to offer.

This approach often results in business losses in the future. Whatever business requirements are there, there will be a tool that can satisfy and help you prosper given that the team is skilled. This brings us to the next parameter.

“Team skills” is a common factor in the majority of decisions in information technology services and cloud-based test automation tools selection is no different. When a team is already equipped with all the knowledge about a tool that satisfies the business requirement, a lot of money and time is saved.

This is the same reason companies hire new joiners who have control over specifically required technologies so that they can start working immediately.

Security and Synergy with DevOps

Cloud-based test automation tools are secure and security is one of the factors that they are seeing such a magnifying growth in the market. But when it comes to DevOps and cloud-based solutions, sometimes synergy does not fit well.

A company applying certain security measures to the DevOps might get restricted errors which can later create hindrance in smooth test automation and pipeline execution. Therefore, look out for the tool that goes best with your DevOps strategy.

Cloud-based solutions to fit perfectly with DevOps should have good control over automation. With advanced test automation features, the cloud-based tool can build up a pipeline very easily.

In addition, if the cloud-based tool can provide scriptless testing as Testsigma does, it would be an added advantage to involve other people in DevOps. This would be impossible with on-premise DevOps solutions.

Alright, we have covered all the aspects that can be joined with DevOps and cloud-based solutions and I hope it will guide you in choosing the right tool quickly. As a final section, let’s look at some of the cloud-based test automation tools for DevOps.

With the expansion of cloud-based demand over the years, the following three tools have been able to make an impact in the market:

Testsigma is a popular cloud-based test automation tool equipped with artificial intelligence and natural language processing capabilities. With Testsigma, it becomes a lot easier to perform automation testing on the cloud with scriptless testing functionalities.

Testsigma also takes care of your DevOps on the cloud by bringing CI/CD functionalities into its testing workflow with a very easy learning curve. You can also integrate Testsigma with Amazon AWS and Microsoft Azure. Give Testsigma a try with its free trial and test for yourself.

Make your cloud based test automation easy and efficient with Testsigma

As for the DevOps segment, SauceLabs is capable of providing a tight automation testing shell within the CI/CD pipeline which greatly reduces the feedback loops and the overall time of execution. You can configure the tests to run with each build and pull request on the pipeline.

Via Visual Studio App Center, you can automate and manage the lifecycle of your iOS, Android, Windows, and macOS apps, on the cloud. Visual studio app centre is developed by Microsoft to cater to the needs of cloud-based test automation services.

It comes with insightful report generation features, allows you to deploy test automation scripts and binaries to the cloud and run automated tests during continuous integration. With the Visual studio app centre, the team can distribute tests to different testing teams which decreases the time in feedback loops and build software faster than ever.

There are other test automation tools too such as Loadstorm that are cloud-based but lacks various functionalities. The tools described here such as Testsigma come with fully equipped features such as the end to end testing, functional testing, regression testing etc.

While there are other tools like Loadstorm then let you automate your performance and load testing on the cloud. With the above tools, you can have a complete one-stop solution to run cloud-based test automation with DevOps.

DevOps has changed the way the industry used to work before. With the introduction of automation into every process, we have delivered better quality software in these times.

On the other hand, cloud-based solutions have contributed in their own way by skipping the process of downloading heavy software, multiple tools for functionality and maintaining the infrastructure. If DevOps and cloud solutions are the second-best ideas to revolutionize, what would be the best one? Join them together!

With test automation capabilities and features to satisfy every type of user, a cloud-based solution looks like it was made for DevOps from the start. It would not be wrong to say that they play a symbiotic relationship role in the industry today.

But these are probably my experiences with professionals and my thoughts on the same. I am eager to listen to what your experience has been and would love to see some interesting hacks in the comment section!