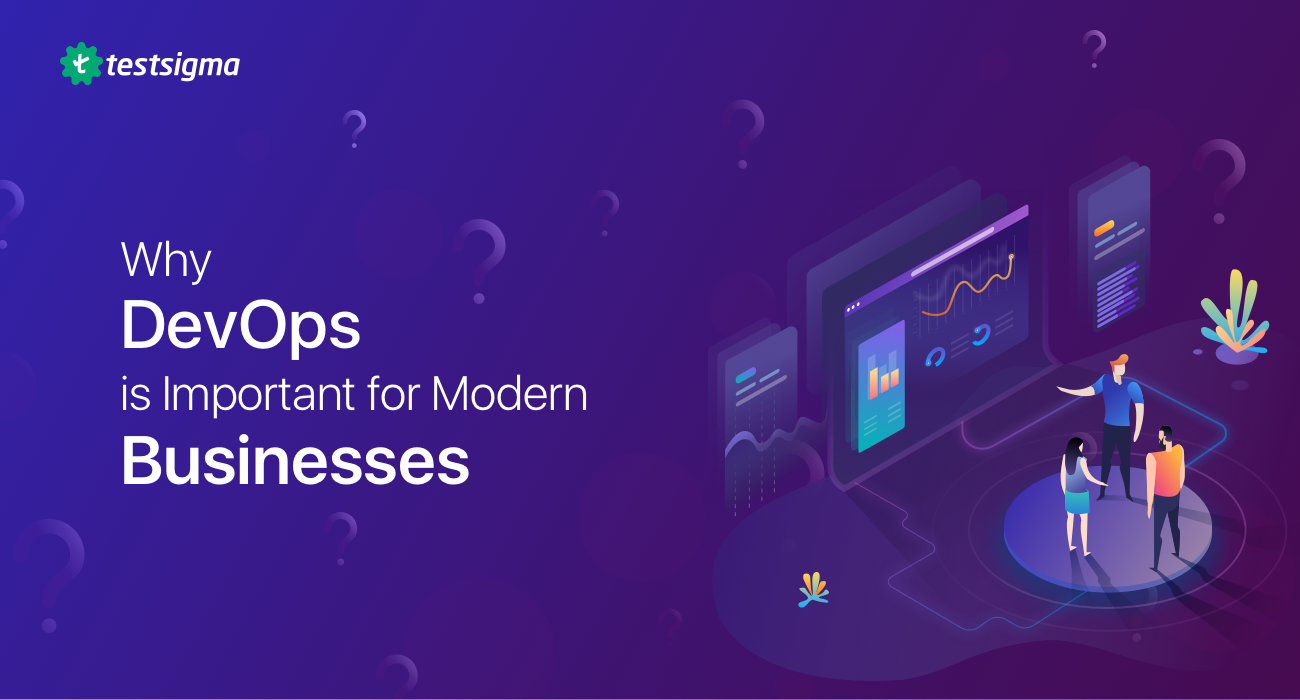 Why DevOps is Important for Modern Businesses

We are certainly in a faster-paced world. As we move forward, organizations need to get out of their silos and follow a more collaborative and efficient process to achieve excellence.

Organizations that adopt DevOps are able to evolve and improve software products much faster when compared to those that use traditional software development processes.

DevOps is a bridge between development and operations in an organization and aims to improve productivity as a whole. It brings release and deployment activities closer to development and testing. DevOps also makes testing an enabler for high-quality releases rather than a bottleneck.

Successfully implementing DevOps practices in your organization can have a significant impact through improved efficiency, greater security, and organizational collaboration. According to the 2017 State of DevOps Report, those organizations that have employed DevOps practices spend 21 percent less time on unplanned work and rework, and 44 percent more time on new work which leads to higher efficiency.

For example, when Microsoft decided to implement DevOps culture and use DevOps practices in its Cloud + Enterprise engineering group, the software giant was able to scale and deliver high-quality services to its customers all across the world far more quickly than it had delivered previously.

Here are a few reasons why DevOps is important for modern businesses:

Companies succeed due to their ability to innovate faster than their competitors. The main objectives of DevOps are automation, continuous delivery and quick feedback cycle. Due to quick and continuous feedback, the majority of the errors are fixed in time which helps in achieving faster releases.  A combination of development and operations efforts in DevOps lead to quick development and release of applications in the market.

The collaborative nature of the DevOps model facilitates a culture of knowledge sharing across the teams. The continuous monitoring and testing of the code improve the overall build quality of the application. As teams are empowered to share their feedback with others, defects are detected and resolved early in the development process.

Software development practices these days require teams to deliver quality software continuously and reduce go-to-market timelines. This can be achieved with DevOps using automation. The Development and Operations teams can develop and integrate code instantly with the help of automated CI and CD pipeline. Overall, DevOps facilitates continuous release and deployment with better quality and efficiency.

DevOps improves business agility by providing an atmosphere of mutual collaboration, effective communication, and integration across all the global teams in an IT organization. The pre-set boundaries based on roles are getting diminished in such an encouraging DevOps environment. The DevOps culture focuses on performance rather than individual goals. This makes the processes more transparent as individuals work towards a common goal.

One of the most common reasons for implementation failure is due to programming defects. As DevOps promotes frequent code versions, it is easy to detect code defects. Also, recovery is much faster when both the development teams and operation teams work together taking into account the challenges of both the teams during development.

The deployment phase becomes more relaxed in teams that follow DevOps. The teams are better rested as DevOps streamlining processes promotes efficient releases and quality builds. As a result of this, there is huge scope to bring an innovative approach in resolving key issues.

According to Puppet’s 2016 State of DevOps Report, organizations can improve their deployment frequency by two hundred times with DevOps and reduce change failure rates by three times. The reliability and stability of an application can be ensured with the automation of the delivery pipeline. With the flawless performance by the applications in production, organizations can achieve greater customer satisfaction.

Despite having numerous benefits for an organization, DevOps is often taken as a relatively new technical concept which has been misunderstood or misused since its inception.

This lack of clarity and confusion in implementing DevOps principles has negatively impacted small and medium organizations. As a result, there is strategic confusion among the teams which is affecting the speed and efficiency that DevOps is supposed to promote.

One of the things that are always overlooked in DevOps practices is continuous testing or automated testing. Without complete automation of testing, the pipelines are never fully automated and therefore the objectives of DevOps are not fulfilled.

According to the World Quality report, there are still 70% of the companies yet to automate their testing for many reasons. Organizations need to understand that compromising on the quality of an application in favour of faster releases will only lead to reduced customer satisfaction.

Integrating automated testing with DevOps is the best thing to do if your objective is to not only save time and money but also to keep the quality intact while reducing the time-to-market.

Though there are several open-source tools and testing frameworks available in the market for continuous testing in DevOps, the right choice of tools will make a huge difference as it not only increases an organization’s ability to deliver applications at a faster rate but also helps in their configuration, integration and delivery management needs.

Testsigma is one such cloud-based automation testing tool which paves way for continuous testing in Agile and DevOps. As an early adopter of DevOps and Agile methodologies, It can be easily integrated to function as a part of your DevTestOps cycles. With parallel test executions, Testsigma can help reduce your regression time significantly which leads to faster feedback in Agile and DevOps.

If the goal for implementation of DevOps in your organization is ‘reduced time-to-market’ with ‘improved quality’  – Testsigma is the tool you are looking for.