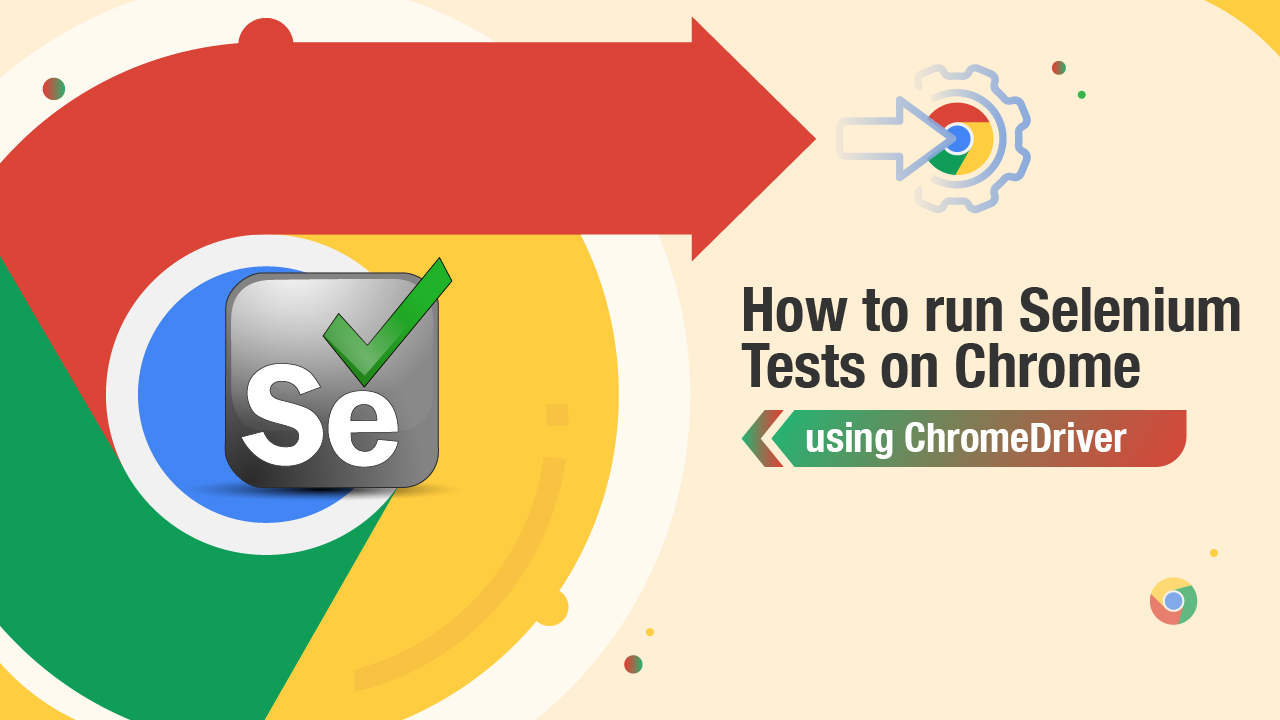 How to run Selenium tests on Chrome using ChromeDriver

The window that gives you access to the Internet is called a web browser. It is the software application needed to visit a local or global website, which has a tremendous amount of utility, without a doubt. With a market share of roughly 65–67%, Google Chrome is the industry leader in this area and one of the most popular web browsers.

Given its widespread use and global coverage, it is essential to evaluate web applications and websites on the Chrome browser. Since Selenium offers cross-browser functionality, it is a preferred tool for test automation. Developers can run Selenium tests on Chrome using the Selenium ChromeDriver.

The Google ChromeDriver is an open-source executable toolkit for Chrome that helps connect the browser to Selenium WebDriver. Once ChromeDriver has been configured, you can run Selenium tests on Chrome.

In this article, we will focus mainly on using ChromeDriver for Selenium. You will learn how to install, configure, and download ChromeDriver for Windows. Let’s look at how to run Selenium tests on Chrome.

Selenium is a portable open-source automation testing framework for web applications. It supports various browsers, including Firefox, Chrome, Internet Explorer, and Safari. It can also simulate user interactions on a website, such as clicking links, filling out forms, and buying products.

Selenium automates web browser interaction to test web applications. Selenium is often used in conjunction with other software testing frameworks, such as JUnit or TestNG, to create comprehensive automated tests for web applications.

Selenium can also be used to automatically test web applications for functionality and performance. In addition, Selenium can be used to scrape data from websites or generate reports automatically. In comparison to other testing tools, Selenium has a huge advantage in that there are no license fees because it is an open-source technology.

The following are additional factors contributing to Selenium’s rising popularity:

While Selenium has many benefits, it also has some drawbacks. For example, Selenium can be slow to run tests, and it can be difficult to set up complex test scenarios. It remains, however, an important tool when it comes to automating web browsers and testing web applications.

ChromeDrivers are standalone servers or executables used by Selenium WebDriver to launch Google Chrome. ChromeDriver is a free, open-source web driver for automated testing of web applications across Google Chrome browsers. Selenium is an umbrella project for a variety of tools and libraries that enable and support automated web testing. ChromeDriver is one such tool that runs on Windows, macOS, and Linux operating systems.

Google ChromeDriver implements the W3C WebDriver standard and provides a platform to write automated tests for Chrome browsers using any programming language that supports the standard. These tests can then be run using any of the many test runners available. Some popular test runners are JUnit, TestNG, and Mocha.

The code for doing this will vary depending on which programming language and test framework you use. Once everything is set up, you can start writing your tests.

Why Use a ChromeDriver?

There are many reasons to use a ChromeDriver when working with web applications. To start with, Chrome is a widely used browser, so your users will likely be using it. Chrome is generally considered to be a stable and reliable browser, so you can be confident that your tests will run smoothly. Google ChromeDriver is faster and more stable than many of the other options on the market, offering a wide range of features, including built-in support for locators, cookies, and extension management.

The ChromeDevTools interface provides a wealth of debugging and troubleshooting tools for ChromeDriver, which is continually updated with new features and improvements. Additionally, with a ChromeDriver, you can take advantage of features like headless mode and automatic updates. Overall, using a ChromeDriver is a great way to ensure that your tests run smoothly and reliably on the most popular web browser. As a result, it is always worth considering using ChromeDriver for your web application needs.

When it comes to web automation, Selenium is one of the most popular tools available. Selenium allows you to control a web browser using code, which can be used for tasks like automated testing or web scraping. Selenium is a powerful tool; however, Selenium can only control browsers that have been specifically designed for automation.

Step 2 – The most recent stable ChromeDriver and beta release details are available on this page.

Step 3 – On the Downloads link, click on the appropriate ChromeDriver download for Selenium version according to the Chrome browser version that is installed on your computer.

Step 4 – This will take you to the ChromeDriver download page, which includes ChromeDriver for the Mac, Windows, and Linux operating systems. Presuming you clicked on the link for ChromeDriver 96, you’ll see something like this –

Step 5 – Download ChromeDriver for Windows by clicking on chromedriver_win32.zip (or the latest version compatible with your operating system)

Now, let us look further and learn how to configure ChromeDriver for Selenium.

How to configure ChromeDriver?

Let us learn how to run Selenium in Chrome using ChromeDriver –

Step 1 – After you have found and extracted the chromedriver.exe executable file, choose a location for this file and copy it there.

Step 7 – Put a semicolon (‘;’) after the string, paste the path of the ChromeDriver file you previously copied, and then click OK.

Step 8 -In your Python script, import the Selenium web driver module and specify the path to ChromeDriver:

Run your script as usual. ChromeDriver will automatically launch the Google Chrome browser and execute your Selenium commands.

How to configure ChromeDriver in macOS?

Chromedriver can be easily configured in macOS by following these steps:

Using your package manager, such as brew or npm, to install the driver is the simplest approach to installing ChromeDriver.

Step 1 – Use the Homebrew package manager in your terminal window to install ChromeDriver with brew install cask ChromeDriver.

Step 2 – Check the version returned by chromedriver –version after it has been installed. It won’t work if there is an error.

(Similar instructions, such as npm install chromedriver, are available for other package managers.)

Step 3 – Use Docker to run Chrome and ChromeDriver in a container. Download the merged container, launch it, and then direct your code to the appropriate location.

Step 4 – Include it in your Selenium setup code and source control check it in just like any other configuration information. If you follow this path, you can add further drivers, such as GeckoDriver (also known as Firefox).

Step 5 – Download the driver, then add the directory where it is to your System PATH.

Now let’s discuss how to use ChromeDriver to run Selenium scripts on a Chrome Browser.

When you specify the path to chromedriver.exe and create an object of the ChromeDriver class, it will look like this –

Selenium and Chrome browsers are the most common combinations for testing web applications. When you want to use Selenium to automatically test your web applications, you will need to use a driver. ChromeDriver is one of the most popular drivers, as it offers support for the Google Chrome browser. While it is possible to use ChromeDriver without any additional configuration, we just discussed in detail to show you how to get the most out of ChromeDriver by configuring it in any operating system.

By default, ChromeDriver will try to launch the latest version of Google Chrome. However, you can specify a different version by setting the ‘CHROME_DRIVER_VERSION’ environment variable. You can now start using Selenium to automate your web browsers.

Testsigma is an open-source, independent test automation platform ready to support your requirements and demands. With free maintenance testing and unlimited flexibility, you can create reliable, individualized, and trustworthy automated tests without needing to spend time on setup, integration, or programming.

Do we need to install ChromeDriver for Selenium?

Selenium WebDriver uses ChromeDriver to manage Chrome. It is kept up-to-date by the WebDriver contributors and the Chromium team.

What is the use of ChromeDriver in Selenium?

A WebDriver implementation called ChromeDriver enables programmers to automate testing for Google Chrome. Without needing to set up a separate testing environment, developers may launch and test their web applications against Chrome by utilizing Google ChromeDriver.

What is ChromeDriver class in Selenium?

When working with Selenium, you will often hear about the ChromeDriver class. This class is responsible for launching and managing Chrome browser instances. While ChromeDriver does not provide any built-in methods for interacting with the browser, it does expose a number of capabilities that can be used to automate tasks.

For example, you can use ChromeDriver to launch a new browser instance, navigate to a web page, and take a screenshot. You can also use it to execute JavaScript code or retrieve information about the current page. Ultimately, the ChromeDriver class provides a powerful way to automate interactions with the Chrome browser.

What is the difference between WebDriver and ChromeDriver?

WebDriver and ChromeDriver are two popular web-based automation tools. Both can be used to automate web browser interactions, but they differ in how they operate. WebDriver is a tool that is used to automatically control web browsers.

In contrast, ChromeDriver is a tool specifically designed to automate Google Chrome. As a result, it offers better support for features that are specific to Chrome, such as extensions and bookmarks. However, WebDriver can be used with any web browser, making it a more versatile tool. Ultimately, the decision of which tool to use depends on the specific needs of the user.

Which driver is best for Selenium?

Selenium works best with ChromeDriver. Additionally, ChromeDriver offers support for functions like cookies and file uploads that are unavailable in other WebDriver implementations. As a result, Selenium WebDriver uses ChromeDriver, a separate application, to manage Chrome. With assistance from WebDriver contributors, it is maintained by the Chrome team.

Can ChromeDriver work without Chrome?

Generally proven, ChromeDriver cannot work without Chrome. However, it can run on any portable Chrome version.