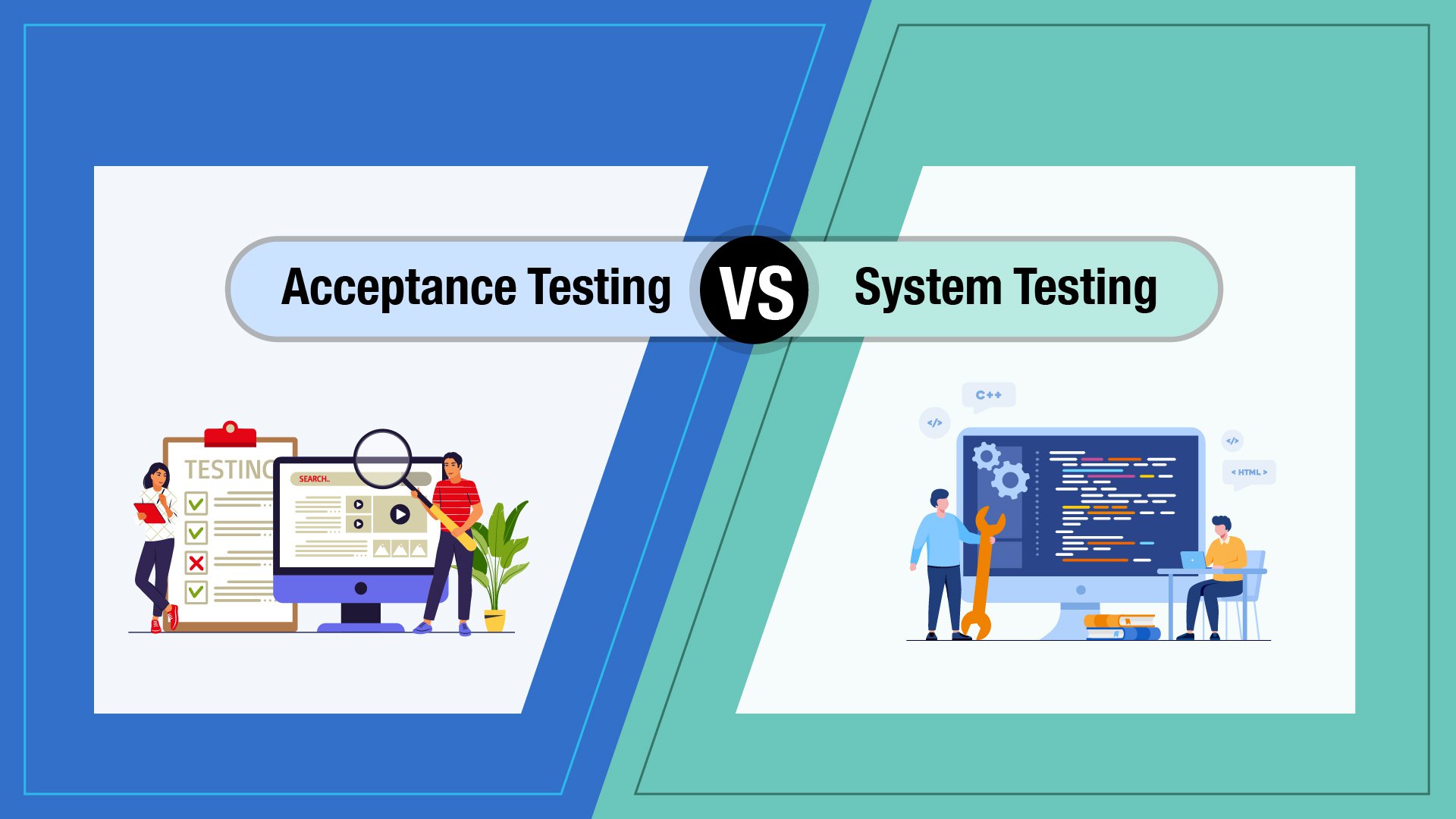 Acceptance Testing vs System Testing: Why do we need them?

The Software Development Life Cycle (SDLC) has multiple stages, which include some testing phases. System testing and acceptance testing are integral parts of the overall testing lifecycle.

In system testing, we test the system as a whole. We integrate all the modules and components and verify if the system meets the expectations or not. Once we have successfully tested the system, the entire application can be handed over to the users to check for its acceptability. We call this acceptance testing.

Hence, first, we do the system testing on the application and then send it for acceptance testing to the users to determine the Go/No-Go for delivery. Therefore, both testing types are necessary in order to achieve a successful release of the application.

In this article, let’s understand the differences between system and acceptance testing and when to use them for your application.

What is Acceptance Testing?

In the acceptance testing phase, we test a system for its acceptability from the user’s perspective. The main goal of acceptance testing is to evaluate the system’s compliance with the business requirements. Based on this, we can assess whether the system is acceptable for delivery/release.

The users or clients carry out acceptance testing in a UAT environment. They validate the new features and once you get a GO, you can release the product. It is a form of black-box testing because the users who test the application do not know about the internal implementation of the code.

The end-user performs user acceptance testing to ensure that the product serves its purpose and meets the business requirements. The users pick up specific and frequently used requirements and then test those. We usually call this end-user testing. Here, the term “user” means the end-user or stakeholder to whom the product is intended.

In CAT, the users sign a Service Level Agreement (SLA) contract. In this contract, there are terms that allow the users to make the payment only if the features align with the requirements. It mentions that once the product goes live, within a set period, some acceptance tests will be performed, and they must be successful.

In regulations acceptance testing, we determine whether the product violates any government rules or regulations in the target country. Although any violations might be unintentional, they will impact the business. In case of a violation, they won’t allow the product in that region, and the product vendors will be responsible.

Operations acceptance testing is non-functional testing, and we use it to determine the operational readiness of the application. It assures the product’s stability before its release. It includes rollback and recovery testing, support availability, reliability, fail-over, compatibility, localization, maintainability, etc.

Alpha testing happens in a controlled environment by a special team of alpha testers. It happens in the testing environment, and their feedback and suggestions help improve bugs and fixes.

The real users or customers of the product, also called beta testers, test the product in their environment. We take continuous feedback from these beta testers and collect information on bugs and fix them. It helps in giving the product a rich user experience. Unlike alpha testing, it happens in an uncontrolled environment with no restrictions on the testers.

Consider an e-commerce application. Suppose we need to add a new feature to generate a random password to this application in the next release cycle. Before releasing the product, it will go through a round of acceptance testing where the product owners will test the feature in a dedicated testing environment. Once it passes this test, it will go live and be available to a few beta testers who will test it in their mobile applications. If the feedback is good, it will be available to all the users of the application.

A few disadvantages of acceptance testing are:

In system testing, we test and validate the fully integrated hardware and software system. We verify whether the system as a whole meets the specified requirements. We usually build an application by integrating a lot of subsystems. The main goal of a system test is to test the end-to-end system specifications.

System testing is also black-box testing because it is done from a user’s perspective. We test it using a black-box strategy where we provide the input to the system and verify the output. The tester does not need to know the code design of the application. The main focus areas of a system test are external interfaces, performance, stability, recovery, stress/load, and smooth interaction with different parts of the system.

We perform system tests in a dedicated production-like environment. They help us to minimize the troubleshooting and support calls after deployment. Also, in this case, we test both the business requirements and application architecture.

System testing has a lot of sub-tests under its umbrella. Let’s have a glance at all the major ones.

Let’s take a simple example to understand what system testing is and where it lies in the testing cycle. We know that a car company will not manufacture the car as a whole. They manufacture each part separately, such as the engine, tires, seats, frame, mirrors, etc.

Once they have manufactured each of these items, they test them independently to check whether they are working as expected. We call this unit testing. After that, we assemble each part with other parts. Thereafter, we need to test the combined part to ensure that each component still works as expected, even after integration. We call this integration testing.

Even after we have assembled all the parts, the car is not actually ready. We need to check whether the different aspects of the assembled car are as per the requirements defined. For example, if the car is smooth to drive, gears and brakes work properly, the mileage still holds good, etc. We call this system testing. And once this is done, we send the car for a test drive to the actual users, known as acceptance testing.

System testing has its own purposes and benefits. It has a lot of tests covering each aspect of a product under its umbrella. Hence, ignoring system tests before a release can hugely impact the quality of the product. Let’s discuss a few advantages of system testing.

To conclude, both acceptance and system testing plays a huge role in ensuring the quality of the product before being released. The primary focus of system testing is to test the overall integrated system and other aspects like performance, scalability, security, etc. On the other hand, the business or end-users perform acceptance testing to validate if the product meets the specified requirements.

Both system and acceptance testing are types of black-box testing. System testing is performed by a team of testers who are given input and expected output. They don’t require any knowledge of the implementation.

When these tests are performed successfully before the release of the product, the chances of a bug being found in production reduce multi-folds. Hence, it’s imperative to perform end-to-end testing like system testing and a test from the business perspective.

System testing is performed by a team of specialized testers in an environment similar to production. They carry out a series of tests to validate the performance, security, reliability, scalability, and other aspects of the system that the unit and integration tests do not cover. On the other hand, acceptance tests are usually carried out by business users or end-users. They do this test to ensure that the final product meets the specified business requirements.

Why do we need system testing?

The primary purpose behind system testing is to detect any risks that the product might bring when used in a particular environment. We use an environment similar to production to perform this test. It helps prevent as many bugs as possible and verifies the design, features, and system performance per the product standards. Moreover, it helps the developers and testers build confidence in the system before handing it over to the users for acceptance testing.

What is the similarity between system testing and user acceptance testing?

System and user acceptance testing are dynamic testing methods used to verify all the requirements specified for the software or the application. They help us validate the overall stability of the system and find out bugs that unit or integration testing methods cannot detect. They are both black-box testing methods because they don’t require any code implementation knowledge.