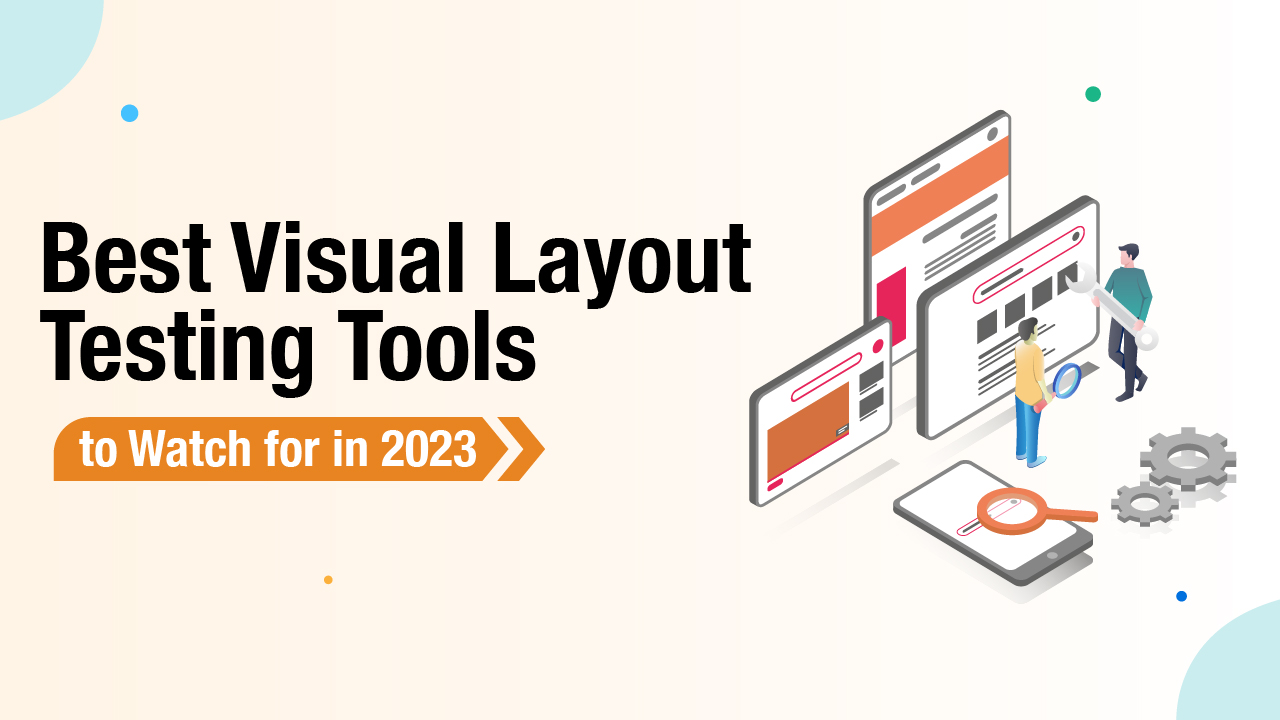 Best Visual Layout Testing Tools to Watch for in 2023

Suppose an e-commerce website has top-notch functional features and runs on the best possible technology of today. It also allows users to browse multiple products and complete their shopping experience. But the interface is confusing, lacks proper structure, and has an inconsistent layout. Would you navigate that site? We think not!

The visual layout takes precedence in attracting traffic despite functional aspects being critical to a site’s success. Nearly 94% of your website’s first impressions are design related, and almost 50% of consumers believe website design to be crucial.

What is Visual Layout Testing?

Visual Layout testing, also called Visual GUI testing, is the process of analyzing and verifying that the software’s user interface (UI) appears proper to all the users on different devices. Basically, Visual testing checks if all the elements on the webpage (buttons, menus, text, color, images, and more) display in the right size, shape, and position.

Besides verifying the appearance, the testing process also ensures that these elements function properly across multiple devices, browsers, and operating systems.

You can perform all these tests using Visual Layout tools that help detect issues by comparing screenshots of before-after scenarios. Here, we discuss the top 10 popular Visual test tools that easily and quickly examine your website’s appearance.

But does Functional testing overlook appearance? Usually, one webpage will have more than hundreds of elements. While Functional testing can analyze their shape, size, color, and position, the resulting test code will exceed hundreds of lines. That’s why the best way to ensure a clear, smooth, and appealing-looking website is to perform Visual testing separately from other testing processes.

Let’s explore some of the most popular Visual layout testing tools:

A popular cloud-based and AI-powered test automation tool, Testsigma supports online and mobile application testing along with API testing. The tool is a codeless testing solution that can run multiple test cases in parallel on different OS and browser versions in real time.

Studio: €3470 with one year of maintenance and support

Enterprise: €5750 with one year of maintenance and support

Runtime: €830 with one year of maintenance and support

Telerik is a modern UI automation testing tool that empowers QAs to build feature-rich experiences for examining web, mobile, and desktop applications. If your application runs on Kendo UI, Telerik is the best go-to option to check for the user interface and its functioning.

Personal: €1.000/year for one subscription

Enterprise: Request a Quote on their website for unlimited subscriptions

Usually, Postman is the tool that is commonly popular for testing APIs. It is useful in making HTTP calls and running scripts simultaneously. But you can leverage the same features to run and automate your UI testing.

Open-source software for front-end testing, Cypress is a powerful testing automation tool that you can run on Windows, Linux, and macOS.

Rapise is a product of Inflectra that enables you to test your desktop, web, and mobile applications in a single, easy-to-use package.

A commercial GUI testing automation tool, Squish is relatively new to the market and assists QA in performing efficient and agile GUI automation.

CubicTest is an open-source Eclipse plug-in that allows users to test applications built on Eclipse. It is mainly used to verify and validate web-based applications or online websites.

These features of Visual Layout testing ensure consistency and ease of use for your application. As this testing checks for the website appearance, here are some of the key features of an ideal Visual GUI testing tool:

Why is Visual Layout Testing Important?

Visual bugs drive away users and block the revenue!

Broken elements on any webpage hamper smooth browsing for users. If you have a subscription button or a Buy Now option, you would want your users to click on them. But if these elements are broken or overlapping, your users will simply leave your website without taking action.

For instance, look at the example below.

If this was on your page, do you reckon your traffic and subsequent revenue would be impacted? For sure!

There are many more reasons why Visual Layout testing is essential for businesses:

There are mainly two types of Visual Layout testing methods that encompass all the different ways of detecting and resolving visual issues on a website:

This type of Visual testing is exactly how it sounds: a tester goes through the entire site or webpage, checking for visual issues. They analyze graphical elements on the page and confirm that the layout aligns with the documented requirements.

While manual Visual testing is fairly accurate, it is time-consuming and laborious. In some instances, the tester can overlook a few issues if they appear correct but are misplaced. Here is when Automated Visual testing emerges as a solution.

This type of testing is easy to execute and requires UI tools. Often, testers run test cases to verify visual elements on a webpage pixel-by-pixel. You can employ any of the above-discussed tools to run your visual test cases to assist you in delivering pixel-perfect visual results.

Automated Visual testing is accurate to pixel, faster than manual testing, and comparatively effortless. Testsigma offers GUI testing by capturing snapshots which you can use to compare before-after scenarios and catch visual bugs.

What are Visual Layout Testing Tools?

Visual Layout testing tools work on methods that identify pixel differences and visual mismatches on web pages. They detect the issues by comparing screenshots of the current page with a baseline image. Using these tools, you can determine UX and UI changes, including color, shape, size, and position of the web elements.

Here are all the website appearance issues you can uncover with automated testing tools:

A Visual Test tool generates, compares, and analyzes browser snapshots to identify any change in pixels. Most often than not, these tools make use of screenshots to verify how the development and deployment of the application design differ through image comparison algorithms.

This part is tricky. With so many Visual testing tools in the market with their advantages and disadvantages, how do you decide which is perfect for your business? The selection of the tool will always depend on your purpose of testing. Here are some of the points to look at before finalizing a GUI testing tool:

GUI automation testing is taking over the world; no business wants to spend time and money on manually testing their products when capable test automation tools are available in the market. And here we have a list of 10 Visual layout testing tools that will accelerate your GUI testing to the next level.

Some of the mentions here are open-source and have been around for quite some time now, while others are commercial tools. Our tool, Testsigma, is one of the best GUI testing tools in the market that supports Visual testing through an image comparison process. But it can do a lot more than just compare a few images. You can go here to see Testsigma in action and decide for yourself.

What is one method to improve Visual layout?

One method to improve Visual layout is to focus on design hierarchy. The hierarchy includes taking care of web elements like typography, lines, shapes, images, color, and space. Web designs with powerful and strong hierarchies make up for a visually appealing website and clear navigation.

What are the advantages and disadvantages of Visual testing?

There are multiple advantages of Visual testing, such as improving users’ UI experience, making the website appealing and clear to understand, and ensuring that all the buttons, menu bars, and icons are displaying properly.

One of the biggest disadvantages of Visual testing is the need to change the test scripts every time new design requirements come. For instance, any change in the UI element will fail not because of defects but because of using old scripts for testing purposes.

What are Visual testing examples?

Some examples of Visual testing are missing icons/logos, overlapping or hidden images or texts, CTAs or menu options breaking, and misplaced web elements.

Are Functional testing and Visual testing the same?