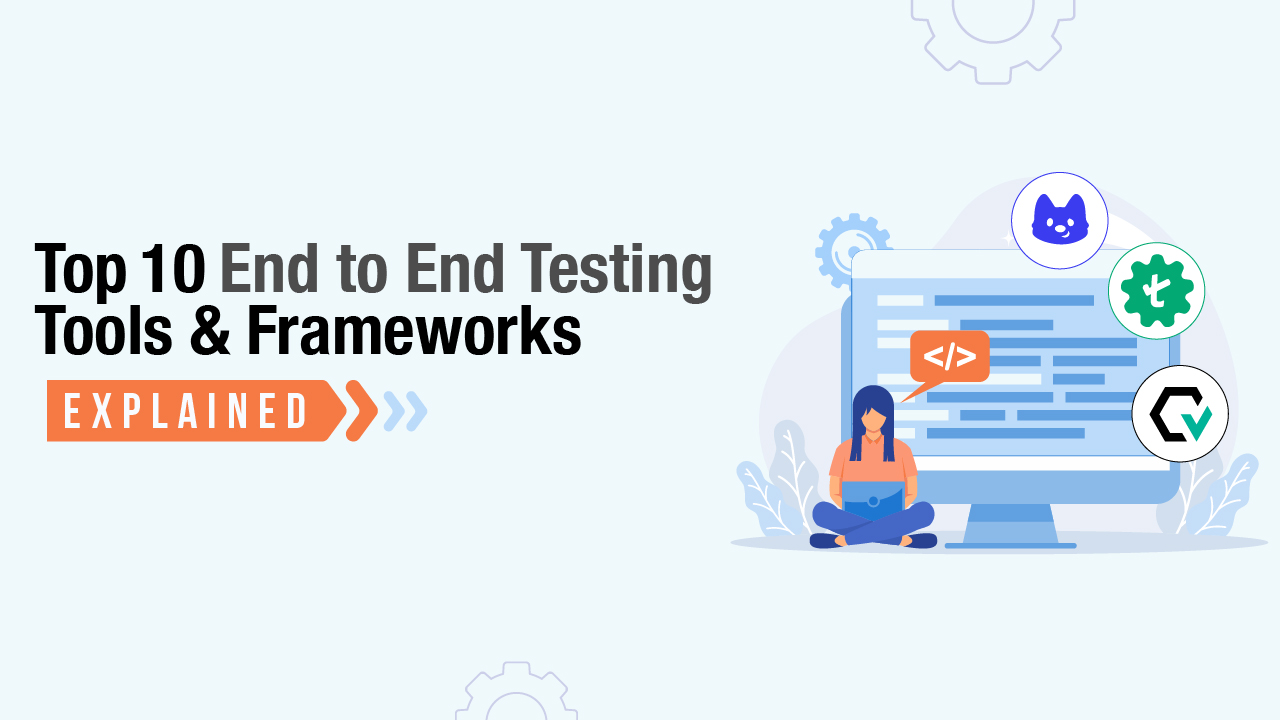 End to end testing is a modern-day technique that is commonly used in agile and other testing methodologies. It broadly appeals to many groups, including the likes of developers, testers, managers, etc., and tests the entire software, ensuring the app behaves as expected.

Here’s a comprehensive guide on the best end to end testing tools and frameworks for your organization.

Here’s a brief description of each end-to-end testing tool, including its features and screenshots to give you a snapshot of the user interface.

Testsigma is one of the leading open source end to end testing frameworks that let the QA teams automate tests for their web apps, mobile apps, and APIs in minutes.Let’s take a look at some of the noteworthy features of Testsigma:

testRigor is one of the renowned end to end testing frameworks that help manual testers automate tests quickly and efficiently. It allows testers to seamlessly create, edit, and update complex tests and rapidly expand test coverage.Here are some of the key features of testRigor:

In a nutshell, testRigor is an ideal tool for software teams who want to rapidly increase their test automation coverage while keeping the maintenance cost under control.

QA Wolf is a cloud-based E2E test framework optimized for testing teams of all skill levels. It is a great fit for companies that want to free up their QA team from test maintenance. Below are some of the main features of QA wolf:

QA Wolf works well with all types of tests, regardless of their complexity level.

Autify is one of the most popular no-code AI-powered end to end testing tools that uses AI to help anyone easily create, execute and automate tests without programming knowledge.Let’s take a quick look at some of the key features of Autify:

One of the top end-to-end testing tools, mabl lets Agile teams easily create reliable end-to-end tests that significantly enhance application’s quality. Thanks to its auto-heal functionality, it captures 30+ unique element attributes during every test run. Below are some of the important features of mabl:

SmartBear is one of the known end to end testing frameworks commonly used by testing and development teams across the globe. It builds and runs functional UI tests for desktop and web apps.Here are some of the key features of SmartBear:

Selenium WebDriver is one of the well-known end to end testing frameworks that help testers perform cross-browser tests. It is an open-source project that develops functional tests to drive the browser. Since Selenium is built using JavaScript, Selenium WebDriver can work on all browsers that support JavaScript.Below are some of the key features of Selenium WebDriver:

Cypress is a renowned end-to-end testing JavaScript framework that has been built by front-end developers. It only works in JavaScript, unlike other tools like Selenium which works in multiple languages such as Java, Python, C#, JavaScript, etc. Here are some of the main features of Cypress:

TestCafe is one of the leading open-source end-to-end testing tools that help testers to test web-based applications. Though TestCafe is a relatively new framework, it has evolved over the years and offers rich features. Let’s take a quick look at some of the prominent features of TestCafe:

Endtest is a leading codeless automated testing platform that helps developers and testers build end-to-end tests for web and mobile apps. Coding teams can leverage Endtest to evaluate software faster without writing any code. Here are some of the key features of Endtest:

What is JavaScript E2E Testing?

When we talk about end-to-end testing in a JavaScript environment, the most common scenario is to test web apps or websites. The question that comes into the picture is: Which is the best E2E testing framework for the web in JavaScript?

There are indeed a lot of end-to-end testing frameworks based on Java programming language, such as Cypress, TestCafe, WebdriverIO, Nightwatch.js, Puppeteer, etc.

However, you’ll need to choose the one that matches your specific requirements. If you ask me, I would say to go with one that is versatile, feature-rich, and backed by a growing community and a powerful partner.

How Does End-to-End Testing Work?

The concept of End-to-End (E2E) has gained momentum in the last few years as a lot of IT companies are moving towards comprehensive solutions that touch every aspect of the testing life cycle, i.e., test planning, test design, test execution, and results analysis.

End-to-end testing ensures all integrations work together and evaluates the software from the end user’s perspective by simulating and validating real scenarios. In a nutshell, end-to-end testing is a great way to verify whether your app is working as expected, taking into account all of its components.

Here are the different types of E2E testing methods that are mostly used by QA teams to perform end to end testing:

Why Do We Perform E2E Testing?

E2E testing is an essential pillar in releasing a robust and error-free application as it verifies complete system flow and increases test coverage of subsystems. Since modern software systems have become more complex and are interconnected with multiple subsystems, the whole system can collapse if you avoid end-to-end testing throughout the development process. An E2E testing life cycle involves 4 different stages:

It is crucial to gauge the success of your end-to-end testing in order to perform it efficiently and save time and effort. Below are some of the key metrics that help in evaluating the success of the testing performed:

Which Framework Should You Choose?

Whether you are a startup or an established organization, choosing the right tool for your test automation requirements is a crucial part of the development lifecycle.

By this time, you already have a detailed overview of the different end-to-end testing frameworks available in the market, with various features, USPs, and varying prices. Before finalizing the one for your organization, it’s important to understand that one size doesn’t fit all. Every framework has its pros and cons, so you need to choose the one that is more apt for your project.

In my opinion, Testsigma should be able to fulfil all your testing needs and won’t bother you much with the cost as well. Take a free trial and decide for yourself.

With the rise in automated testing tools in the market, it can become overwhelming when deciding what tool is best for your team or your company. Hope this detailed guide on end-to-end testing tools and frameworks will help you choose an ideal for your company that perfectly matches your project requirements.

Which framework is mostly used for end to end testing?

There are many popular frameworks that are commonly used by a lot of software organizations, such as Testsigma, Selenium, Cypress, Cucumber, and Testim. No matter which framework you choose, you will end up spending a significant amount of time on your test infrastructure unless you go with a managed platform. Many companies mix and match some of these frameworks depending on their applications and need to increase the test coverage and quality of their application.

Yes, end-to-end testing is a type of black box testing wherein the applications are tested from a complete scenario point of view. Each scenario may have many functionalities, and each functionality can have its own functional tests. It is a combination of both functional and non-functional testing.

Are E2E and integration testing the same?

Not really. Though E2E and integration testing types are alike, they offer a different focus. Integration testing checks how two modules interact with one another or with third-party solutions. On the other hand, E2E testing immediately checks how the entire system works and ensures that the app components work well together.

In many cases, E2E tests are performed manually, which can be tedious and error-prone. However, automation ensures a consistent and fast test coverage of the system. Ideally, you should use both automated and manual testing to run end-to-end tests, as it allows you to maximize the test coverage while finding new defects.