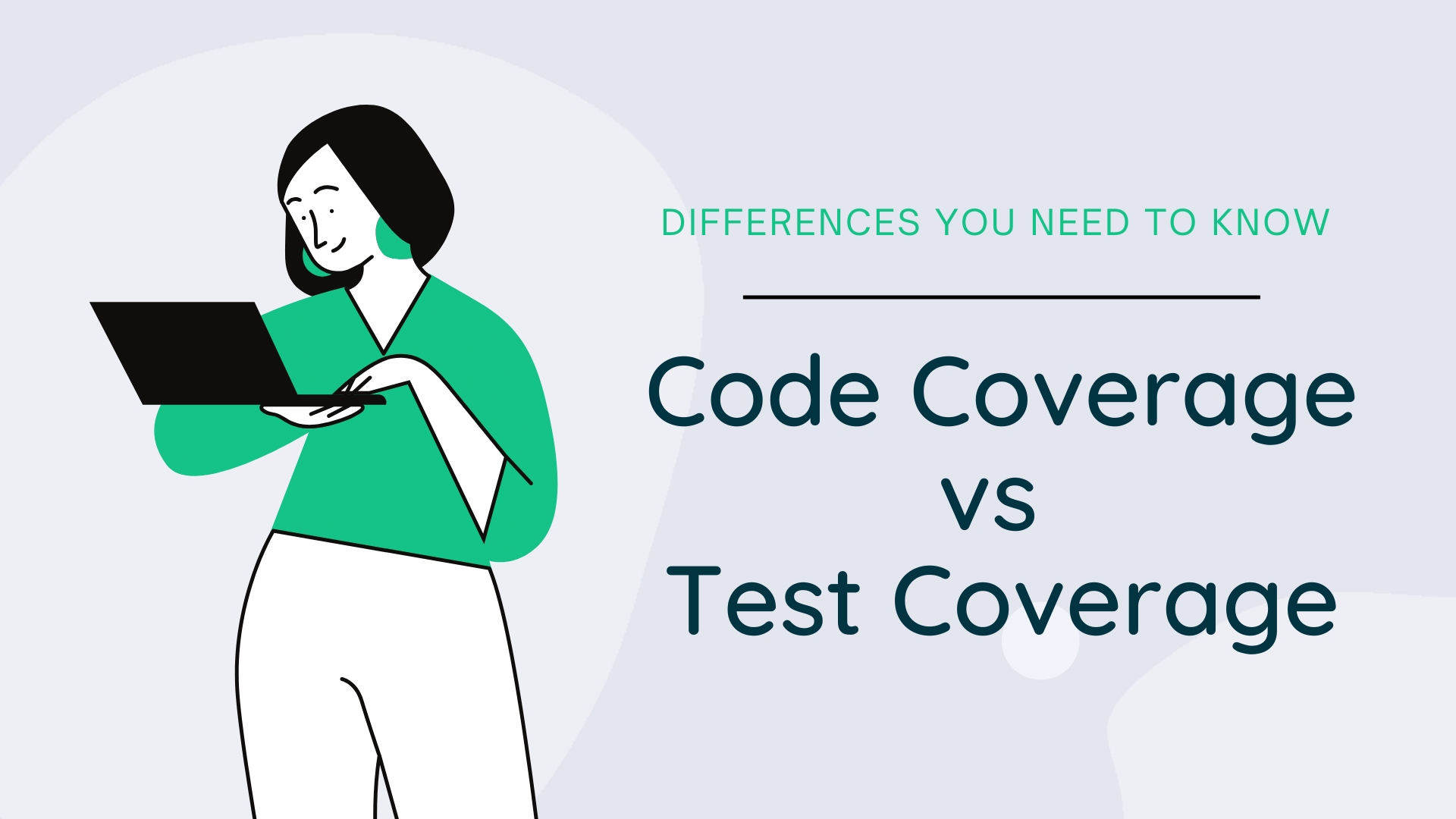 Code Coverage vs Test Coverage: Differences You Need to Know

While code coverage is a quantitative measure (number of lines of code executed by tests) of the effectiveness of code, test coverage is a qualitative approach. It aims to assess if the test cases are covering entire functional requirements.

The core objective of both code coverage and test coverage remains the measurement metrics leveraged to simplify the assessment of the quality of application code. These are significant for developers to rectify any errors if discovered and enhance the overall quality of an application.

Why is Coverage Important?

Each piece of code that is sent to production needs to be thoroughly tested in terms of quality and effectiveness. Developers need to ensure every possible real-life scenario is handled well by the application. Hence, coverage – which refers to the evaluation of the efficiency is vital for your product and its smooth functionality.

Here are a few reasons why coverage is important for your application:

What is Code Coverage?

At its core, code coverage is a software testing metric defining the number of successfully validated lines of code in a test procedure. Code coverage helps in determining how thoroughly software has been tested.

The primary aim of every development team is to deliver enterprise-grade software with the least count of bugs possible. To accomplish that, it is crucial to review the software by analyzing, monitoring and measuring the test procedures. It is where code coverage comes into the picture as an effective metric to evaluate the overall testing’s efficiency and completeness. Let’s take a look at some more advantages of code coverage.

You are already aware that code coverage enhances the effectiveness of test code and allows you to improve the coverage performance. But why exactly does the efficiency boost up? Here are the top 3 benefits of code coverage:

How to Measure Code Coverage?

Measuring code coverage is quite simple because it’s a quantitative analysis. Here’s how you can calculate the code coverage for a software component:

For example – Consider testing your software component which has 1000 lines of code. Now out of the entire code component, if 800 lines of code get validated – the code coverage becomes 80%.

In that case, you might be wondering how to reach 100 per cent of code coverage – that would be better after all, isn’t it?

Well, it’s not necessarily always better. We will discuss more on this later.

What is Test Coverage?

The first major differentiator of test coverage is unlike that of code coverage, this is a black-box testing approach. It primarily measures the number of tests that have been executed, and whether the active test cases are covering the maximum part of the numerous documents including

After all the functionalities mentioned in the documents are executed, test code has to be developed to validate the implemented product features. The objective is to provide metrics on tests being executed on a software solution.

Test coverage involves numerous testing techniques like unit testing, responsive testing, cross-browser testing, integration testing and acceptance testing. The evaluation and measurement of test coverage are then done based on a number of features covered by the test code.

Test coverage is a valuable metric that caters to the much-needed measurement of functional efficiency of software components. Here are the top benefits of test coverage:

How to Measure Test Coverage?

Measuring test coverage is not as simple as measuring code coverage because of the qualitative nature of test coverage. Numerous techniques exist to evaluate the test coverage based on the application and industry. Although a majority of test coverage measurement methods are very specific to certain relevant cases and cannot be used out of scope, some popular ones can be applied to every project:

With the continuous addition of features and fixing of errors, test codes also need to be updated correspondingly. So to keep the efficiency of testing intact, it’s vital to set minimum acceptable testing standards. Code coverage is the ideal metric to analyze and improve your overall code quality and testing strength.

But how do you execute code coverage? What are the best tools that would help you do it successfully? Let’s find out without wasting a moment.

Numerous types of code coverage exist in software testing. It is important to note that each of them aims for a different part of the code:

A branch coverage checks if any of the 4 possible conditions above are satisfied and the code successfully gets inside the block.

How to Perform Code Coverage?

Here are the different types of instrumentation:

A variety of code coverage tools are available according to the compatibility with different programming languages.

It is a python-oriented code coverage tool that informs the tester about the status of each component of code – whether it was executed, not executed, or could have been executed but wasn’t. Coverage.py can be installed easily using the command – pip install coverage.

JaCoCo is a Java-based code coverage tool. It is run by JUnit tests and delivers the results in binary format.

One of the most popular code coverage tools – Testwell CTC++ needs to be downloaded from third-party websites and it is compatible with C++ compilers. The differentiator of this tool is its ability to inform you how many times each line of code got executed rather than just informing whether a line was executed or not.

While code coverage helps you verify if each code in the software application is being executed by existing tests or not, test coverage indicates whether those tests are covering all the functional requirements of the application or not.

When it comes to qualitative measurement of your application’s functionality – various aspects form it together. From functional requirements to system requirements and risk minimization, here are the different types of test coverage:

How to Perform Test Coverage?

Test coverage can be executed by leveraging different types of testing. However, businesses have varied requirements and hence which test should be run for test coverage depends on their specific requirements. Some of the most popular techniques to perform test coverage are

The tool is primarily designed for unit testing and is one of the most popular test coverage solutions. A Python-based framework, PyUnit ensures smooth development of test cases, tests, suites and test fixtures.

It is an open-source unit testing framework compatible with Java. JUnit is utilized by developers to deliver mundane tasks like writing, executing and analyzing tests. Interestingly, the tool is powerful enough to cater to user interface and regression testing synonyms.

Code Coverage vs. Test Coverage: Which One Should You Choose?

It’s now time to address the elephant in the room – code coverage vs test coverage: which one to choose and why. As both of these are completely different measurement approaches, it won’t be justified to choose between the two. Code coverage is a quantitative measure and is more related to the white-box testing technique. While on the other hand, test coverage is a qualitative measure and a black-box testing approach.

So there’s no exact answer to this question, as it would entirely depend on your business requirements and the intricacy of the software application. In a majority of the cases, however, both test coverage and code coverage are used.

People have always mistaken both test coverage and code coverage to be the same term. But they don’t have anything in common!

For all the testers, having an in-depth analysis of code coverage and test coverage is vital. Not only do these techniques offer efficient testing, but also help developers save hundreds of hours and executives save resources.

Additionally, 100% code coverage should not be sought at any stage of SDLC because it will end up wasting more time and resources as developers would miss out on vital testing modules when short at the time.

None of the code coverage or test coverage is a perfect choice, but you should try both of them for a considerable amount of time. The combo would most likely yield the ideal results.