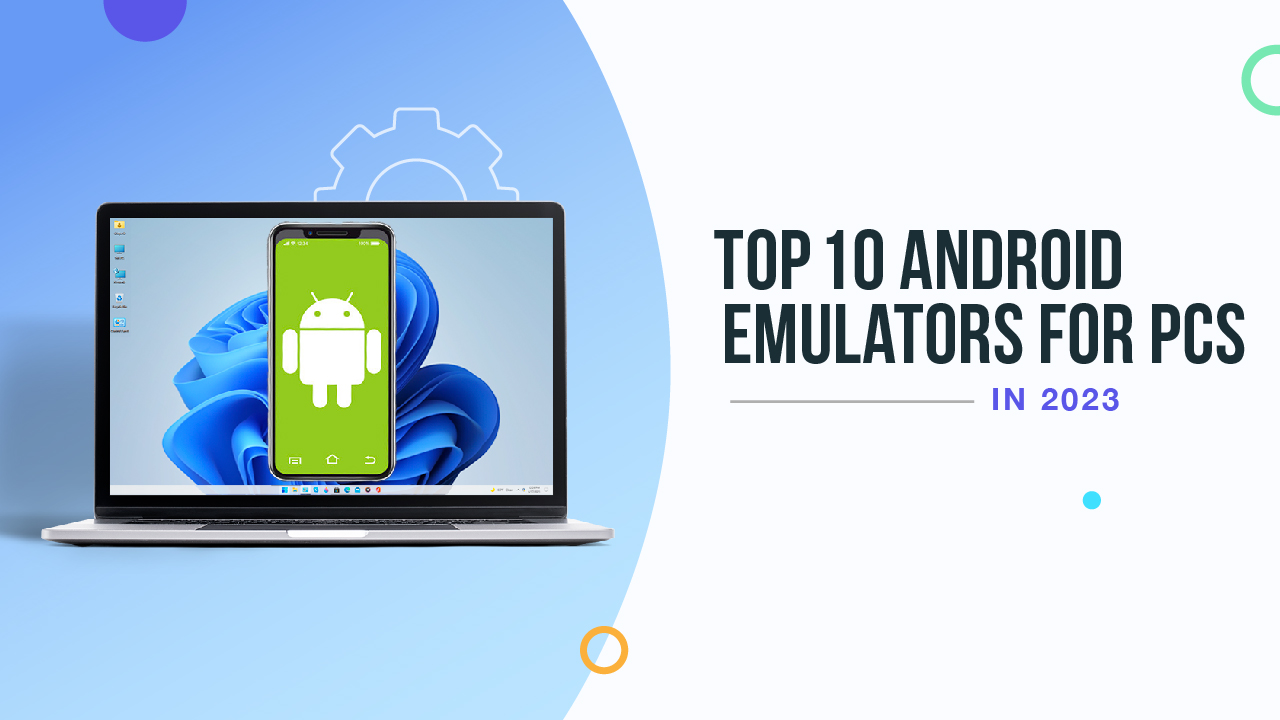 According to a poll conducted in 2022, more than 2.65 million Android applications and 494K+ publishers were on the Google Play Store alone. This number demonstrates the need for enhanced testing techniques for mobile applications. Android emulators for PCs will help you do that.

There are various Android emulators on the market. Each differs in compatibility, user experience, usage, and pricing. You will need to pick the Android emulator that suits your needs.

This article will list the top Android emulators for PCs, and you can find the best emulator that meets your business requirements.

What is an Android Emulator?

Android emulators are software applications that simulate Android devices on your computer. Their main purpose is for mobile app development and debugging.

For example, a Samsung emulator for PC will emulate a Samsung device, its hardware, OS, and functionality, providing valuable insight into how the app will work on an actual Samsung device.

Android emulators can also operate on your Windows, Mac, or Linux machines, allowing you to create Android-specific software at your workstation.

One of the primary uses for an Android emulator is to allow you to use Android software on a computer. Emulators let programmers ensure their software works as intended before it is released to the general public. On the other hand, thanks to emulators, video gamers may enjoy their mobile games on a larger screen and with far more robust computer hardware.

Why do we need Android Emulators?

Gamers use it to play Android games on their PC. Playing mobile games on a personal computer with a bigger display is way more fun. The mouse, keyboard, and joystick are also supported on PC, enhancing the gaming experience. The mobile battery backup becomes a challenge if you are a serious gamer. But gamers can easily resolve this using an Android emulator on a PC.

Software Developers use it for developing and testing mobile applications on various platforms. The Android app market is much larger than the Windows App Store, so developing Android apps could get you at the top of the market.

For example, Android Studio is in a class of its own compared to its rivals. It uses the Android Virtual Device (AVD) feature, which allows you to simulate real hardware behavior. In doing so, you may ensure fewer defects in the final product by testing it on various devices before release.

It helps developers to test applications across various devices and platforms.

Advantages of Android Emulators for PCs

Here is the list of the top 10 Android emulators for PCs. Please note that the list is in no order.

When it comes to Android emulators, PrimeOS is now one of the most talked-about options due to its excellent features and widespread popularity. It has a full desktop environment, with all the programs available on Mac OS or Windows. Using this emulator, the user can transform their desktop device into a top-tier mobile gaming platform with improved consistency and usability.

Price: This open-source software is free

BlueStacks is the most used Android emulator. It comes with a library of 2 million Android apps and games. Also, it is quite popular among the gaming community, as they offer frequent product updates.

It is compatible with almost any app and doesn’t need a lot of memory to run. It is free, has a stylish UI, and can handle numerous games simultaneously.

Price: The pricing plan includes free and paid. The cost of the premium plan is $24 monthly for additional features.

The AMIDuOS Emulator was developed in the USA. It provides support for Android devices to connect to any infrastructure easily.

It has a full-screen mode, so when you run a game or program in that mode, you won’t notice any difference from using an Android phone or computer. You can easily transfer data from your mobile device and your computer. Also, AMIDuOS supports sensors that let users use apps like Google Earth and Google Now.

Price- It is open source and free to use.

Android Studio, an IDE developed by Google, is ideal for developing, testing, and publishing Android apps. It provides various tools and plugins for developers to test applications efficiently.This tool is specifically created for app developers and is not suitable for running games. It has versatile functionality and can launch programs faster than the actual device.

It provides users with cutting-edge performance, and they can view the application in a more open and expansive framework. Due to Google’s reputation, this emulator is quite trustworthy.

Price: Free since it is open-source.

Ko Player stands out for its ability to provide a quality gaming experience on the desktop. The primary goal is to mimic the original hardware as closely as possible, ensuring a seamless and responsive experience.

It is one of the top Android emulators for PC, as it offers a smooth and lag-free playing experience. With this, you can play all the Android games on your PC. It works well with all input devices like the keyboard, mouse, and more.

Bliss OS is an open-source operating system slightly different from other Android emulators. When other emulators just emulate Android devices on PC, Bliss OS has to be installed as a separate OS.It provides support for keymapping, gamepads, and profiles for gamers. An exciting feature is that it comes with Widevine L3 DRM, which means you can stream protected content from apps like Netflix, Amazon Prime, Hulu, and more. Thus, making it easy to utilize Android apps on a desktop environment.

MEmu Play, launched in 2015, is an Android emulator that gives similar results as BlueStacks and Nox. It has more than 20 million users worldwide.

The key mapping is the selling point of the emulator. The file transfer between Windows and the emulator is simple. And it supports both AMD and Intel chips.

With MEmu, you may level up numerous copies of the same account or play many games on a single account.

Price: It is free to use, but the pro version is costly.

Nox Player is one of the best-known Android emulators for PCs that can run Android apps on a desktop. It is General Data Protection Regulation (GDPR) compliant, so privacy is respected and kept safe.

It works great for games and programs as it is very stable and can be optimized. Thus, it is easier to use.

With Nox, players enjoy the same level of immersion of Android on a computer. It receives input via gamepads, keyboards, parallel processes, and recording scripts.

With over 150 million users and a prominent position in the Asian market, Nox Player has quickly become a global phenomenon since its release.

Price: It is open-source and free

ARChon is not a traditional emulator and is the first Android emulator to function in the Google Chrome browser. Users can install it as a Chrome extension.

It differs from other Android emulators used for gaming. This emulator is not for hardcore gaming but works well for productivity apps.

It does not require any tool installation and works on a Chrome browser with an internet connection.

Price: It is open-source and available for free

The Android emulators for PCs have certain drawbacks-

I hope the above list of Android emulators for PCs will help you find the right one based on your business requirements.

In the world of mobile devices, Android is by far the most widely adopted OS. However, you’ll need one of the emulators mentioned above to run your mobile applications and games on a desktop computer or laptop. They will make your PC feel like you are using Android. The quality varies greatly from one to the next. Use a tool like Testsigma to improve your experience further, as it supports emulators and supercharges them!

A creative content writer having over four years of experience in digital marketing. An Engineering graduate with experience in website creation, content development, social media marketing, and copywriting. Driven by passion, I always strive to learn and explore. Let's connect.