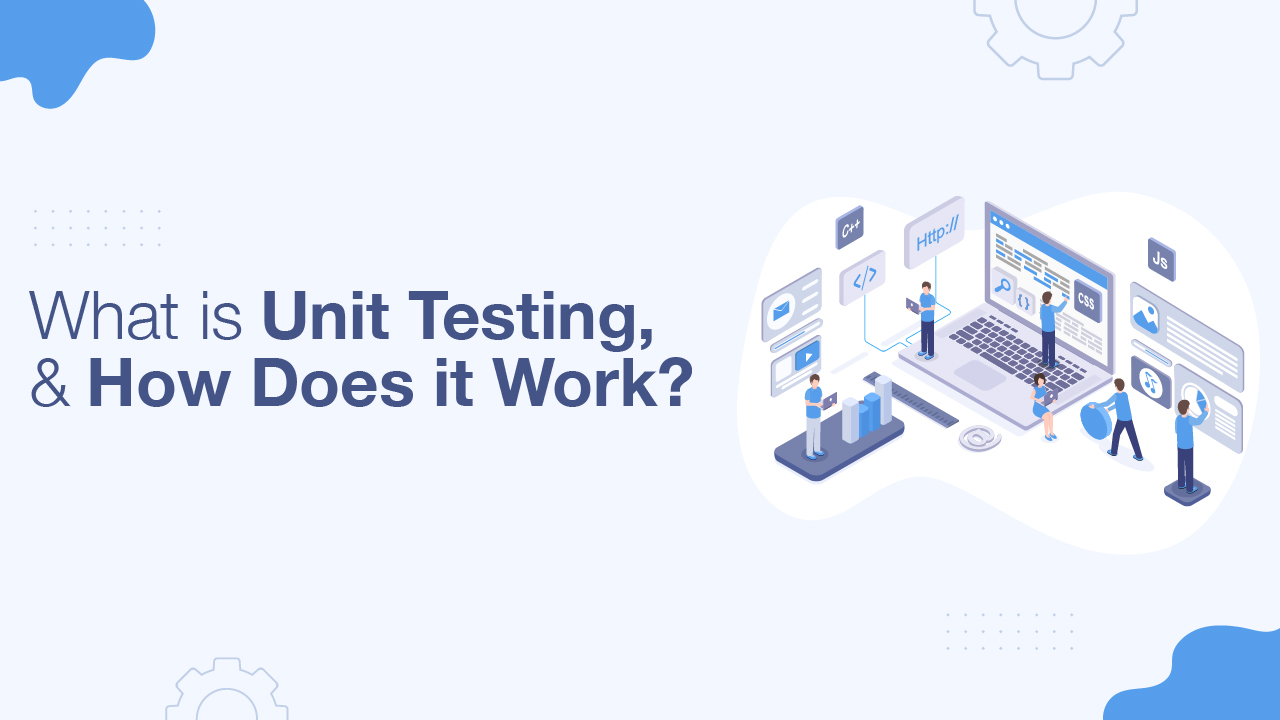 What is Unit Testing, and How Does It Work?

If you’re a software engineer, chances are you’ve encountered the term “unit testing” at some point in your career. But what exactly is unit testing, and how does it work?

You’ve written a few lines of code and want to ensure they work as expected. So you run the code, and boom, it all falls apart. In the digital age, broken code can mean lost money, frustrated users, and a lot of wasted time. That’s where unit testing comes in.

Unit testing is a crucial part of the software development process that involves writing and running small, isolated tests for individual code units. These tests help verify that the code is functioning correctly and identify any errors or bugs.

In this blog post, we’ll delve into the details of unit testing, including how it works, the benefits it offers, and tips for getting the most out of the process. Whether you’re new to unit testing or looking to deepen your understanding of this important topic, this post has something for you. So let’s get started!

What Is Unit Testing?

Unit testing is functional testing that verifies the individual units of source code. A team is the smallest testable part of an application. Being a part of the tech team at KingEssays, I should say that unit testing is essential because it helps you verify that your code works as intended. It also allows you to find and fix problems with your code. You create a safety net for your code when you write unit tests. If something breaks, the unit tests will alert you so that you can fix the problem.

Unit testing is done either manually or with automated tools. Automated tools are often more reliable and efficient, but they can be expensive to set up and maintain.

Unit tests break down the code you’re testing into small, discrete parts, or “units.” Doing this allows you to test each unit in isolation from the others. This helps you understand how that unit works and interacts with the surrounding code.

After you’ve written your unit tests, you can run them against your codebase. This will help you to identify any errors or problems that may exist. You can then fix these issues before they cause any real damage.

There are three unit tests: functional, integration, and sanity.

Verifies that each unit of code functions as expected. This testing is done by feeding known inputs into the system and verifying the outputs. For example, you might have a function that takes an integer as input and returns the square of that number. You would test this function by providing different numbers as input and verifying that the output is correct.

Sanity testing is a software testing method that confirms that the system behaves as expected under normal conditions. This testing is done to ensure that basic functionality works as expected.

Now that you know the basics of unit testing let’s look at some techniques you can use.

Mocking is when you create dummy objects for real objects in your code. This allows you to test how your code interacts with other objects without using those other objects.

Stubs are similar to mocks, but they’re typically used to test external API calls. For example, say you’re unit testing some code that makes an HTTP request to an external API. You don’t want to make that HTTP request during your unit test because it’s slow, and it might introduce errors that have nothing to do with your code. Instead, you can create a stub that imitates the API call and returns the data you expect from the real API call.

Data-driven testing is where you write your unit tests such that they can be run with different sets of data. This is especially useful if you have a lot of edge cases to test, or if the data you’re working with is too large to hard-code into your unit tests.

While there are many advantages to unit testing, it is also important to be aware of the disadvantages.

Unit tests are written in code, and they test other codes. They’re usually written in the same language as the code they’re trying, but this isn’t always the case.

Unit tests usually take the form of small functions that call the code you want to test and compare the output to the expected output. If the output matches what was expected, the test passes. If not, the test fails.

Here’s an elementary example in Python:

In this example, we have a function called `test_sum` that takes two values, `1` and `2`, and calls the `sum` function with those values. The expected output is `3`, so we assert that the two values are equal.

If they are, the test passes. If they’re not, the test fails.

What Can I Do With Unit Testing?

Now that you know what unit testing is and how it works, you might wonder what to do with it.

Unit testing is great for checking your work as you go. It’s a way to ensure that the code you’re writing does what you want it to.

It’s also a good form of documenting how your code should work when you write unit tests. This can be extremely helpful for other developers who need to work with your code.

Of course, there is a danger zone when it comes to unit testing. If you’re not careful, you can write tests that are too specific to implementing your code. This can make your code more difficult to change in the future.

Common problems with unit testing include writing more tests, covering all edge cases, and testing too specific to the implementation.

In conclusion, unit testing is a crucial part of the software development process that helps ensure the quality and reliability of your code. By writing and running small, isolated tests for individual code units, you can catch errors and bugs early on, improve the maintainability of your code, and build confidence in your work.

To get the most out of unit testing, it’s important to write tests that cover a wide range of scenarios and edge cases and to regularly run and update your tests as you make changes to your code.

One way to automate and streamline the unit testing process is using specialized tools like Testsigma. With Testsigma, you can easily create, execute, and manage your unit tests, saving time and effort while improving the quality of your code. Whether you’re new to unit testing or an experienced developer, Testsigma can help you take your testing to the next level.

What is the objective of Unit Testing?

Unit testing is a vital software development exercise designed to ensure that each program component works correctly. The main objective of unit testing is to ensure that any changes or updates to the code do not cause unexpected errors by verifying that all separate modules – like functions and procedures – are functioning correctly. Unit tests can also detect coding errors before the project moves to more complex phases, saving time and resources in the long run.

What type of testing is unit testing?

Unit testing is a software development process that involves testing individual code units independently from other program portions. It is one of the essential steps in establishing quality control guidelines for a given software project and often results in dramatically fewer errors and defects throughout the programming life cycle.

Unit testing helps to ensure that all new functions, classes, and modules perform as expected and that changes made to existing code do not break the program. By catching errors at a smaller scale, unit testing minimizes the time and resources necessary for debugging more significant segments of code when problems are found down the line during larger-scale integration tests.

What are the Unit Testing Tools?

When it comes to unit testing, a variety of tools can be used to ensure code quality. Popular options include NUnit, XUnit, JUnit, and MSTest, ideal for writing unit tests on programming languages such as Java, JavaScript, and Python. Moreover, the popular Selenium framework is used for automated browser-based testing.

Each tool offers automatic testing execution, parallel test runs, and detailed reporting. They also enable developers to manage their unit tests in test suites and share them across multiple projects. As these tools increase accuracy and productivity regarding unit testing, choosing the right one for your development needs is essential.

Diane H Wong is an online essay writer on KingEssays. Her favorite challenge is jumping into new technology and learning about the latest marketing techniques. In this case, Diane has a chance to share her experience with other people and stay on top of evolving tech trends.