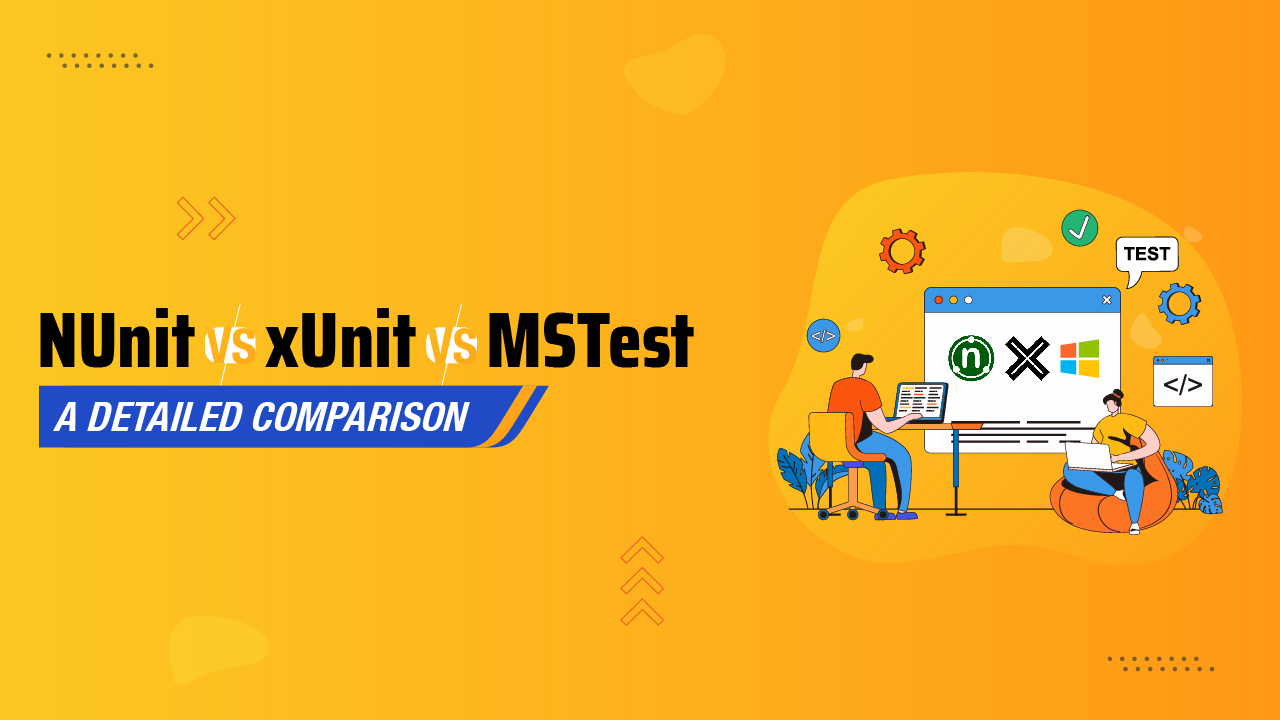 NUnit vs xUnit vs MSTest: Which is better? Detailed Comparison

When you build the software, you most likely follow the Software Development Life Cycle (SDLC) process, where testing is the most critical part. The testing phase will go through a separate process called Software Testing Life Cycle (STLC). The testing requires the planning, development, and execution of test cases.

C# is the most trending language in the .NET world. Any organization, which prefers the Microsoft tech stack and .NET architecture, typically uses C# programming language. Like Java and Python, C#  also has many testing frameworks to support automation testing at different stages. NUnit, xUnit, and MSTest are popular testing tools with the .NET framework. Understanding the differences and their features helps to choose the right one for your project. If we look through C# history, it has evolved and shares a lot of similarities with Java. Similarly, the testing tools also share a lot of similarities in comparison with Java-based testing tools.

The NUnit, xUnit, and MSTest are the top trending testing frameworks that are used with C# programming languages. Most of the time organization doesn’t want to spend much on testing tools, so open-source tools are preferred. Similarly, when it comes to testing tools, you need to consider the features such as cross-platform support, data-driven testing support, extensibility, customization, reporting, learning curve, documentation, community support, etc.

Let’s compare the top 3 testing frameworks NUnit, xUnit, and MSTest, and understand their features and differences.

The NUnit is adapted from Java JUnit, so users feel a similar flavor while using it. It is a free testing framework for all .NET based languages. NUnit is shipped with an MIT license; it is open-source, and .NET Foundation supports it. The latest NUnit 3 is completely rewritten to support many new features.

The NuGet is the package manager for .NET framework. The NuGet keeps track of the download history. The trends show that NuGet is downloaded 216M with an average of 50K per day downloads. The current version of NUnit is 3.13.X.

The annotations are also called attributes in NUnit terminology. There are nearly 40+ different types of annotation available; you can use them as per your requirements.  Let’s explore the most commonly used and important attributes.

xUnit is Open source test library for .NET-based applications. xUnit is written by the same NUnit authors, with better architecture and framework in mind. xUnit is not limited to C#; it can be used for any .NET family language such as F#, VB.Net, etc. xUnit is shipped with Apache 2 license.

The NuGet package manager trends show that xUnit has 268M downloads with an average per day download of 70K. The current xUnit version is 2.4.X.

xUnit is designed to eliminate the bad testing practices and flaws in NUnit. As the testing tools evolve and extend to a new feature, they deviate from their original goal. xUnit.net author considered every piece of information and created a new highly customizable and extendable framework.

In comparison with all available testing tools for the .NET framework, the xUnit is highly customizable and has the most robust architecture. This is one of the reasons the xUnit is used by many compared to other testing tools.

Points to remember when using xUnit

Since xUnit has different architecture and syntaxes in comparison with other tools available in the market, it may be challenging to find the right annotations.

MSTest was developed by Microsoft and then integrated into Visual Studio IDE. MSTest is also available as an open-source version which is now popularly known as MSTest V2. Unlike other frameworks, you do not need to download the MSTest or add the package details. The MSTest is shipped as the default testing framework with Visual Studio.

The NuGet package manager trend shows that the MSTest is downloaded 163.8M with a daily average download of 69K. Just like xUnit, the download and usage rate is higher for MSTest.

NUnit vs xUnit vs MSTest: Comparing the Unit Testing frameworks

In the above section, you have gone through the detailed view of each testing framework. However, it might be difficult to take a call on which is the better framework. Let’s do a quick side-by-side comparison.

Below is the simple code, written using the NUnit testing framework:

Below is an example of the xUnit code:

Below is the example of the MSTest sample code

NUnit vs MSTest vs XUnit: Which is better?

All of the above testing frameworks are the most used, and they’re continuously trying to improve and bring new features. Since all 3 are open source, they provide good community support.

The NuGet trends show that the xUnit has the highest number of downloads; MSTest and NUnit follow subsequently. However, this cannot be deciding factor in choosing the testing library. Every testing library has its advantages and disadvantages, so consideration has to be made by carefully evaluating tools by comparing them against the actual business use cases.

Though we say the above frameworks are trending tools, they require a good amount of technical expertise to build the framework and make your test cases up and running. Testsigma watched this move carefully and the difficulties that testers faced, and built a tool that requires no or less technical knowledge.

Testsigma offers the SAAS platform which requires no coding to design the test cases. One who knows and can write English-like language should be able to design the automation tests, and with a few clicks, you can configure them to run across the platforms and browsers. One of the major advantages is you don’t have to build your custom reports to share with the stakeholder once the test execution is complete; everything is ready for you. You can even share the report links and discuss further on this. This not only helps in speedy delivery but also helps manual testers to contribute and set the automation test cases.