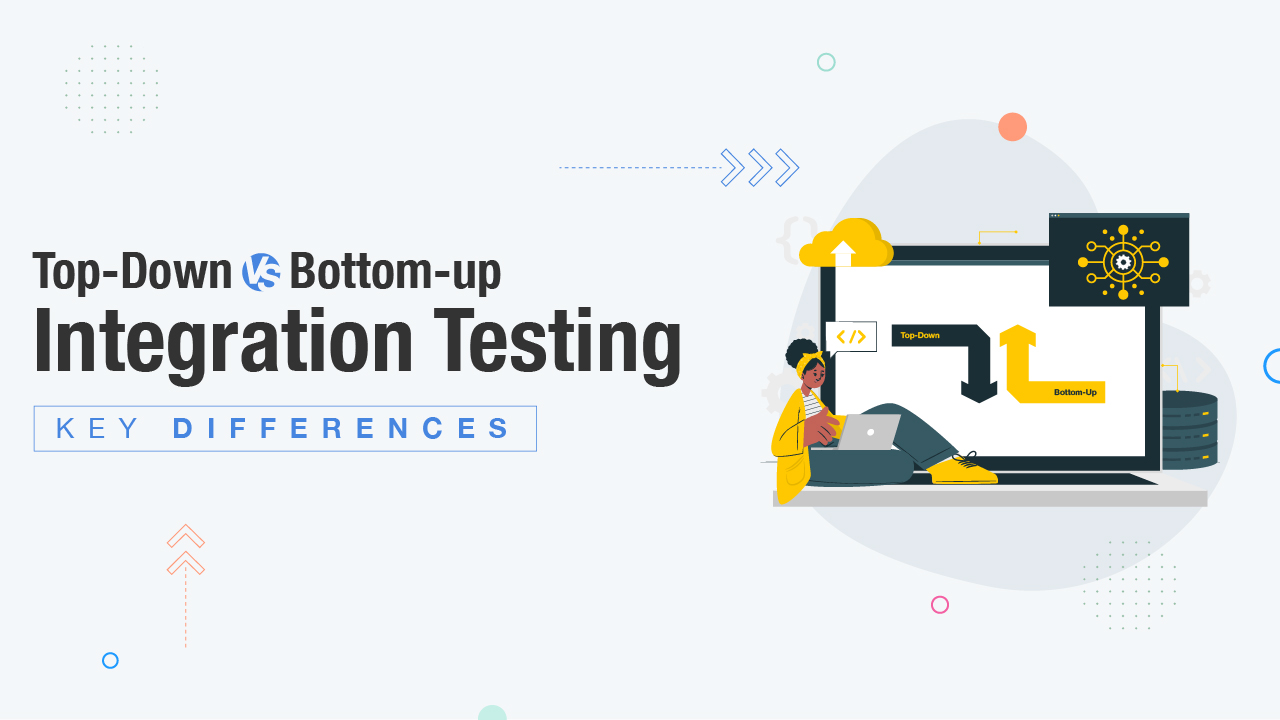 Once Unit testing is over and you integrate separate modules to form a complete system, Integration testing comes into the picture. It follows certain specifications to examine the interaction and behavior of different modules as they come together to build a system.

However, you must have a thorough knowledge of Integration testing and its requirements before you jump to understanding its different approaches. So, here we begin.

What is Integration Testing?

Integration testing comes after Unit testing and follows the communication between several software modules after their design, development, and integration. Testers analyze connected components in this methodology to check for compatibility issues. Often, such issues arise between modules due to data transfer and software-hardware incompatibility.

There are several automation tools available to help you perform Integration testing. Some of the popular tools, such as Selenium, Pytest, Testsigma, and Protractor, are all open source and offer several in-house options and use cases for testing purposes.

Integration testing is conducted iteratively for the module group (making up the system) to find the errors. It is an agile methodology that follows the sprint cycle technique.

What are Different Types of Integration Testing?

Under this technique, either all or major modules are integrated for testing. It is only done after all the components are up and running.

Incremental testing is when a minimum of two (sometimes more) logically related modules are connected for testing, and the same process continues as more modules add to the system.

Top-down testing follows a sequential path of dealing with the top modules before moving on to later or sub-modules.

The bottom-up approach is simply the opposite of Top-down testing.

As the name suggests, hybrid or mixed Integration testing combines Top-down and Bottom-up to achieve the advantages of both types.

Although all these types have their use cases and advantages, this blog focuses on Top-down and Bottom-up approaches and the differences between them.

Point to Note: Top-down and Bottom-up come under the Incremental Integration testing approach.

What is Top-Down Integration Testing?

Top-down incremental Integration testing builds the program structure by moving from the top module to the lower modules. The process follows a certain downward hierarchy where the lower-level (sub-modules) modules are integrated into the top-level module (main module) using either a depth-first or breadth-first method. The primary advantage of this technique is to verify the control transfer and ease of integration as early as possible.

Almost all the Top-down models rely on Stubs (also called dummy programs) to run the testing. These stubs simulate the functioning of sub-modules.

There are several advantages of Top-down Integration testing that offer refuge to developers and testers. It helps find major errors even before a sub-module is designed and integrated.

There are a few disadvantages of the Top-down approach as well that you need to be aware of before implementing the process.

How does Top-Down Integration Testing Work?

In the earlier section discussing the Top-down testing approach, we mentioned two methods—Depth-first and Breadth-first. Let’s take an example of each.

In the Depth-first approach, your team will design and start integration from the top module. Let’s call it M1. As they move downward, they will integrate sub-modules in a sequential manner going from M1 to M2, M3, M4, and so on.

In the Breadth-first Integration testing approach, the team will start the design and integration from M1, but it will not go in a sequential way. Rather, M1 will integrate with M2 and M6 first and move on to interact with M3, M4, M5, and M7.

It is here when sub-modules are not available to integrate and test, stubs become useful. The stubs act as the placeholders and function the same way as the sub-module.

This is where we move onto the Bottom-up approach that will give you a final picture of the difference between Top-down and Bottom-up Integration testing.

What is Bottom-Up Integration Testing?

By the name of it, we are sure you know what Bottom-up Integration testing is and how it functions. But for more clarity, here’s the definition: Bottom-up Integration takes into account sub-modules and moves upward in the integration process. It eliminates the need for stubs, as lower-level modules are already available for integration before moving on to using the top module. It decreases the amount of overhead present in the Top-down approach.

Bottom-up Integration testing has multiple advantages. It is a user-friendly approach that results in high success rates in overall system development with long-lasting positive outcomes.

Besides the above-mentioned advantages, here are some of the drawbacks of using the Bottom-up Integration testing approach as well:

How does Bottom-Up Integration Testing Work?

Let’s take the same example as used in the Top-down testing approach.

In the Bottom-up approach, you will club together lower-level modules in clusters. Here, M3, M4, and M5 will make one cluster, and M7 will be another. Each of these two clusters will use control programs for Integration testing. The high-level modules—M2 and M6—will be replaced with drivers if they are still in design or currently unavailable for testing.

After testing, testers will remove the drivers and combine the sub-modules with high-level modules to create another cluster. Subsequently, merge these clusters with the top module to further the Integration testing process at the system level.

The difference between Top-down and Bottom-up Integration testing is that the former moves downward, and the latter moves upward. Top-down focuses on designing and testing the top module before merging it with sub-modules. Bottom-up, on the other hand, combines the sub-modules to test them and moves upward thereafter.

At its foundation, Integration testing is the second level of testing right after Unit testing. All the system modules that are designed, developed, and tested during the Unit testing stage go through integration and further examination to check for compatibility issues. While Integration testing has multiple approaches that you can adopt as per your testing needs, two of the popular ones are Top-down and Bottom-up.

Both types have their advantages and disadvantages to help you decide which approach will best serve your needs. And if you are on the lookout for automation tools that guides your QA team to start and continue Integration testing based on any one of these two types, we recommend Testsigma and Selenium, as they both offer multiple options in terms of testing. You can choose the former if your team wishes to skip the coding part and move directly on to testing the application.

What is the purpose of Bottom-up testing?

The purpose of Bottom-up Integration testing is to uncover crucial issues like input or output data usage, which are usually performed by sub-modules early in the testing stage. In short, it focuses on the analysis of specific characteristics and micro attributes of lower modules as per user requirements.

What is the purpose of Top-down testing?

The purpose of Top-down integration testing is to view all the components from the top and move downward in a manner to check the system’s functioning before starting to build the sub-modules. It will help you to catch errors even before you start working on every module of your application system.