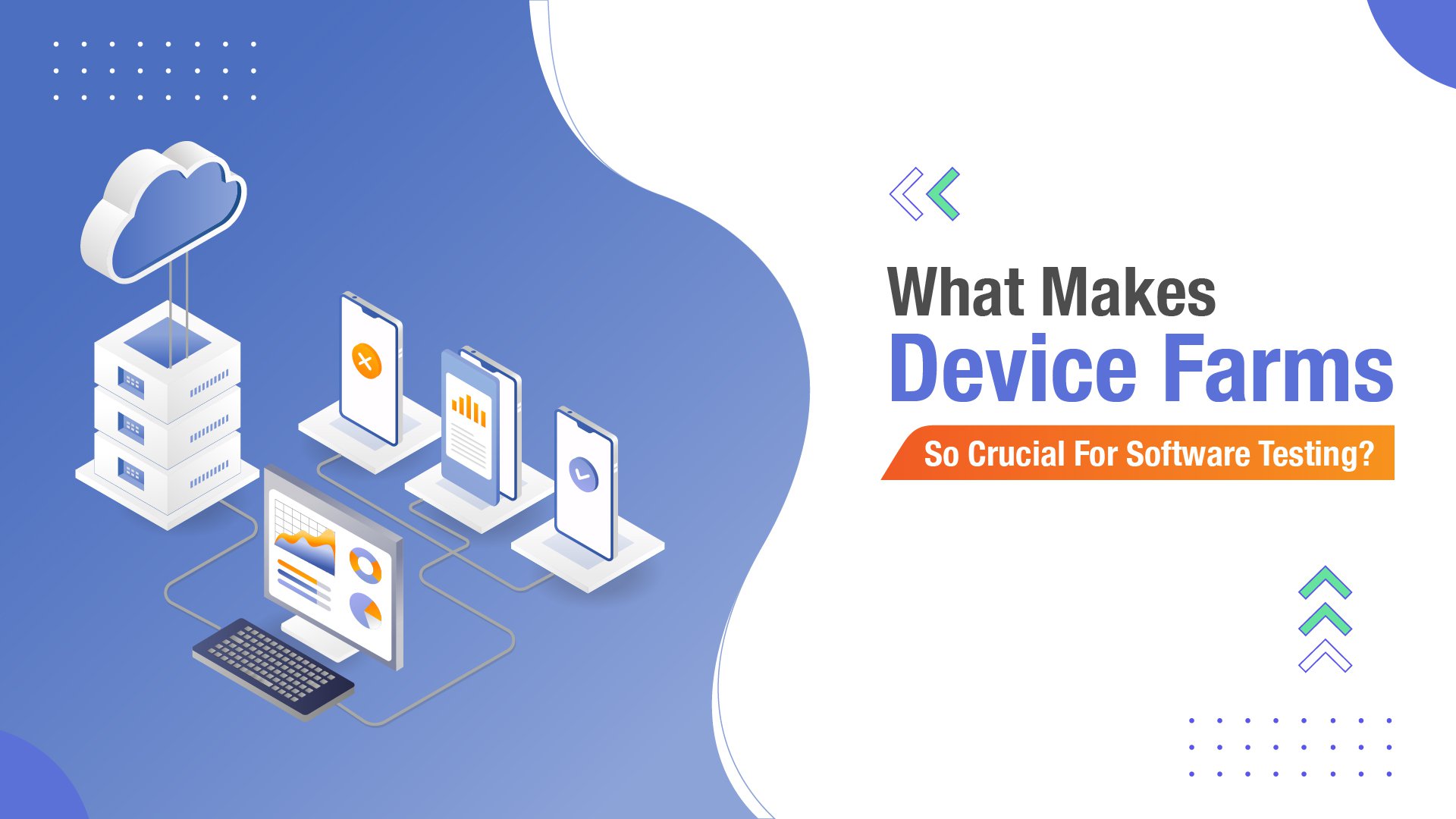 What Makes Device Farms So Crucial For Software Testing?

The Mobile app market is growing at an incredible rate. As of January 2022, over 3.57 million apps were available for download on the Google Play Store, which is only expected to grow in the coming years. With so many apps on the market, it’s becoming increasingly difficult for developers to stand out. One way to ensure that your app is of the highest quality and has the best chance of success is to test it on various devices. This is where Device Farms come in. They are a crucial part of the software testing process because they help ensure that mobile apps are compatible with many devices.

In this article, we’ll explain what makes device farms so crucial for software testing. We’ll also provide tips on getting the most out of your device farm testing.

What is Device Farm/Device Cloud?

Device Farm is a cloud-based service that helps you test your mobile apps and websites on various devices. It is cost-effective to test your apps on real devices without buying or maintaining a physical device lab. It also supports various devices, including Android, iOS, Windows, and Fire OS devices. You can use it to test your app's compatibility with different devices, screen sizes, and operating system versions. Device Farm tests can be run on a single device or many devices at once. Developers can also run their tests on devices located in different geographic regions.

Device farms can be used in two different ways:

The app may either be automatically tested with several frameworks or manually loaded and executed on the device.

The purpose of using Device Farm in Software Testing

Concerns and constraints that Device Farms helps with

How does Device Cloud work?

Pros of building your Device Farm

The occurrence of several separate physical devices using various mobile operating system versions is known as fragmentation. Fragmentation is one of the main problems in testing mobile apps. Google used to release information on Android distribution once per month. But as of late 2018, that custom has ceased, and we now only receive the distribution data annually. The most significant piece of the pie now belongs to smartphones running on Android 11 and newer at 28.3%, up from 24.2% according to the updated distribution statistics of Google for 2022 (which have been conveniently organized into a pie chart below).

The fragmentation problem is exacerbated by other operating systems like iOS and Windows. Any software that wishes to appeal to a large audience must undergo testing on infrastructure that enables testing on actual devices, particularly genuine mobile devices.

Consequently, creating your device farm gives you the benefits listed below.

Usage costs: Electricity expenditures make up the majority of use costs. Your costs will decrease as you do more tests, and your overall investment will be more profitable.

Maintenance: Small, localized lab maintenance expenditures are equivalent to what your team's haphazard use of equipment would cost.

Consistency of outcomes: Because the same equipment may be used for several types of testing, the test results are pretty predictable. You have complete control over who has access to devices, when and for how long.

Cons of creating your Device Farm

If you decide to construct your device farm, you should do so after taking into account a few potential obstacles:

Bandwidth: A specialized lab engineer is likely required if your farm is large and scattered to monitor system stability, device cleanup, etc.

Diversification of devices: To hasten application development and testing, it is advisable to focus on a small number of the most practical devices. For compatibility testing, cloud farms are preferable. The cost will increase in direct proportion to how diverse you want your local lab to be.

Upfront expenses: The cost of purchasing devices (the most expensive component), adding more hosts to the lab, and making an initial setup investment will be higher.

Also, consider the cost of continuing to buy recently introduced products and maintenance costs for software and hardware components. Consider overseeing thousands of devices, associated software components, and hundreds of server workstations and maintaining a committed workforce to handle the infrastructure.

Utilizing a mobile device farm powered by the cloud is an alternate method. Your testers have the same level of access to the devices as they would with a sizable, on-premise device farm. At the same time, a reputable third party handles all device installation, setup, and maintenance.

Continue reading if you want to learn more about third-party Device Farms.

The advantages and difficulties of employing a third-party device farm are as follows.

According to a survey, the typical mobile user checks their smartphone 47 times daily. Additionally, 71% of app uninstallations are determined to result from crashes. What utility is an application if it doesn't provide a positive user experience? Consumers are not known for being very forgiving. Therefore it is essential to create a user-friendly application and test it thoroughly to ensure that it does not conk out in the hands of the user.

Using a device farm for your mobile testing requirements has various benefits, some of which are listed below:

Even though Device farms exceed the expectation of automation, there are a few essential components. They don't have any additional capabilities in a testing solution because they are solely focused on the devices/browsers you access in the cloud. These consist of the following:

Testsigma always meets its customers' needs and expectations while considering any potential limitations listed below.

Top 2 Device Farms and their attributes

Many device farms are available, but not all are created equal. This section will examine the top five device farms and what makes each one special.

Amazon Device Farm is a cloud-based service that makes testing apps on various devices easy. You can use it to test your app's compatibility with different devices, operating systems, and screen sizes. Amazon Device Farm integrates with the AWS Mobile SDK, so you can quickly run tests on your app's backend services.

Sauce Labs is a leading provider of cloud-based mobile app testing. Its device farm enables users to test their apps on real devices in both automated and manual testing modes.

Some of the key features of Sauce Labs' device farm include:

What does Testsigma bring to the table?

There are many leading providers to contact regarding automation testing, so why should you select Testsigma among them?

Along with all of them, you may disregard the worry about the security of your files because Testsigma takes the utmost precautions to secure them.

Device Farm testing may be used to test an application across various devices and contexts, as we all know, to ensure that it meets client demands without any issues when deployed. This blog post may provide a concise explanation of device farms, their advantages, and their drawbacks.

Testsigma is a cloud-based, no-code test automation platform enabling you to run simultaneous automated tests on cloud-hosted devices. Its flexibility allows businesses from any sector to utilize it for mobile, native and web app testing. Even though the idea of a private device farm is still relatively novel, Testsigma is your go-to tool to begin your automation journey.