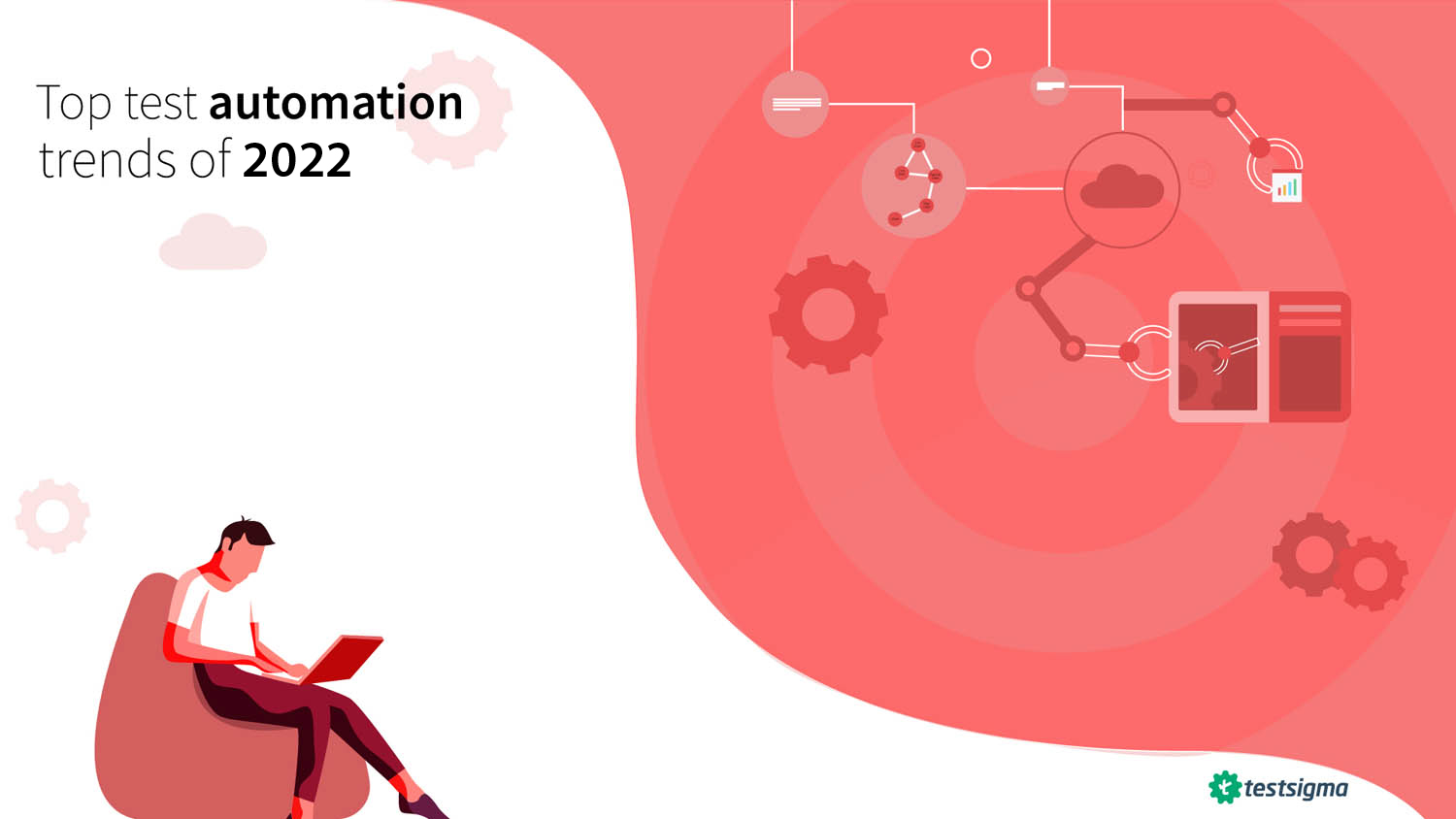 12 Latest Software Test Automation Trends To Look For In 2023

Advancements in technology improve the lives of people and save time and money for organizations year after year and there is no reason that the next year, 2023 will be any different.

Here, Check out the software testing trends for 2023

In this article, we will be talking about the technologies and techniques that are expected to become test automation trends in 2023.

The highlights of the top test automation trends that we will be discussing in this article are:

Here are the Top 10 Testing Automation Trends we expect in the year 2023:

Hyper means “Hyper Active or Unusually energetic” and not going far away from its meaning, Hyper Automation means active automation.

Automation of end-to-end processes using technologies like RPA, AI, ML, NLP and other such technologies has been making its place in the industry for some time now.

Industries are very interested in implementing hyper-automation across all the processes they follow because it helps them reduce manual efforts to a minimum and saves a substantial amount of time and money in the long run.
For eg. It has been since 2016 that a major IT firm WIPRO has been pushing for the application of hyper-automation to all their processes in their own firm.

According to Gartner, Hyper automation is a technology trend to look out for in 2023. It enables organizations to create their own digital twin (a term coined by Gartner).

If not already done, this is the right time for automation professionals to learn the tools and technologies being used for the implementation of Hyper Automation.

Technology is gradually increasing its reach to make human lives easier in all spheres of life. IoT or Internet of Things is an example of that. Here multiple types of mechanical and digital objects are provided unique IDs and are given the ability to transfer data on the network without any human-to-human or human-to-computer interaction.

IoT aims to greatly improve the lives of its users but such great innovations also come with great responsibilities. The challenge with IoT is to ensure it’s appropriate functioning in all conditions. In addition, privacy and security need to be given huge importance here because any lapses could lead to major issues.

IoT is for sure a trend that is expected to grow for the next few years to come as also suggested by fortunebusinessinsights.com and also according to the Gartner technology trends for 2023.

Thus, quality assurance and automated testing of these IoT devices will continue to be a major focus area and is expected to become one of the top test automation trends in 2023.

Autonomous, in terms of automated testing, means the ability to create test cases and execute them without human intervention. AI & ML are the technologies being used to make this a reality.

An example of autonomous automation testing tool is test.ai which uses AI bots to do user experience testing and reports issues without any human intervention.

DevOps has been around for about a decade now and has become a crucial automation process that enables organizations to deploy changes to a system in production quickly and efficiently.

To make sure quality is maintained between all these deployments, continuous testing is now being fused with DevOps giving birth to DevTestOps. DevTestOps aims to ensure that the changes in the system will be deployed on production not only without delays but also without any compromise on quality.

A recent study suggests that a low MTTR(Mean Time To Repair) in production corresponds to increased customer satisfaction.

Going towards low MTTR means an improvement in all three of these categories: testing process, effectiveness, and tooling. And that is where effective DevTestOps will play a major part. Thus, DevTestOps is expected to be one of the test automation trends in 2023.

According to Gartner, Multi experience is going to be the future of app development.

Jason Wong, research VP at Gartner said: “Development platform vendors are expanding their value proposition beyond mobile apps and web development to meet user and industry demands. The result is the emergence of multi-experience development platforms, which are used in developing chat, voice, augmented reality and wearable experiences in support of the digital business.”

More than ever, companies are now focused on releasing their own products on multiple kinds of devices including wearables and augmented reality, thus enabling the users to experience the products in different ways.

Mixed Reality Market is expected to see major growth in the future.

The trend is for sure a development trend, but, testing has to catch up to maintain an uncompromised quality. Thus in 2023, Testers will be seen embracing the multi-experience testing and figure out ways to automate this testing.

6. The democratization of Automated Testing

There are multiple ways in which testing is being democratized at present and the trend is expected to grow. The two trends that need attention here are:

With the advent of multi-experience development, the number of devices needed for testing a simple development is increasing exponentially. And the markets being global and every product being released in multiple countries, testing on a large number of devices by different kind of people is required. This is where Crowdsourced testing is going to prove to be very useful.

The democratization of automated testing is also on the rise. Using technologies like NLP(Natural Language Processing), AI and ML, automation has been made possible with a very low learning curve.

Now, Automated testing is being made doable and understandable for people even if they don’t have much knowledge about traditional automation. This also makes it possible for other team members including Developers, Project Management, Product Management and stakeholders to get involved in test automation as and where needed.

Thus, the democratization of testing is expected to be a trend in 2023.

There are multiple commercial testing tools like Saucelabs, Testsigma, TestComplete that offer to store the automated test cases on the cloud such that they become a complete package for testing. The only problem that could sometimes bother their users is sometimes the delay they face in testing execution and seeing the results because of the cloud being hosted in a faraway location.

The Cloud Computing trend is expected to evolve better by transforming into a distributed cloud in 2023. Here, the content hosted on the cloud could be accessed from the nearest cloud instead of a fixed location of the cloud, thus improving the speed and efficiency of executing the hosted test cases and getting the results.

Introduction of Hyper Automation and Autonomous things is going to make processes super efficient for sure but the biggest concern is going to be security.

A wide majority of the automation done for Hyper Automation and Autonomous things will be AI-driven. Hence, testing and automation will also need to focus on the security of these processes using AI in 2020 to keep them safe and secure for use for all.

Traditionally test automation has had some common problems:

Testers and Organizations have been looking for tools that could solve the above problems and with new technologies available to solve these problems like NLP, AI, ML, Autonomous things. 2020 will see organizations adopting such tools to improve the quality and reliability of test automation.

Even though there are people who are predicting the death of Scrum, an agile methodology that became synonymous to agile since about a decade now, agile with different methodologies is still in vogue and is being used by 97% of software development organizations all around the globe.

Inclusion of automation into the Agile Methodology the right way has been a challenge since and organizations have tried to come out with tools that can help make Agile as automation-friendly as possible.

With AI and ML seeing rapid adoption in all fields, 2023 will also see such tools being adopted widely and is expected to continue to be a test automation trend.

According to the top future technologies for 2023, with all the advances in technology in terms of User Experience and multi-experience development, UX Design will be a highly valued skill and with it, the tools and people that understand the designs and are able to test them will be highly valued.

Some stats that prove that user experience should not be taken lightly ever:

There are some people that have realized the importance of UX and its testing For eg. the builders of test.ai tool which aims to automatically test UX for a mobile application using AI bots. The importance of UX in today’s world cannot be stressed enough and its automated testing is expected to be one of the test automation trends in 2023.

Though AI and ML has been talked about in multiple points above, it deserves a separate point because most of the tools and processes that are going to revolutionize the test automation industry in 2023 will be using AI, ML or some of its subfields like NLP for improving the speed, quality and cost of test automation.

Below diagram depicts how people think AI is benefiting them:

Revenue from the AI software market has been increasing year by year as can be seen in the graph below and is also expected to rise in 2023:

So, Individual Testers, Testing Service Providers and Companies looking for improving their testing processes should look at these trends closely and start adopting them to stay current and relevant in the fast-changing times.

Suggested Reading: Software Test Automation : What To Expect In The Near Future