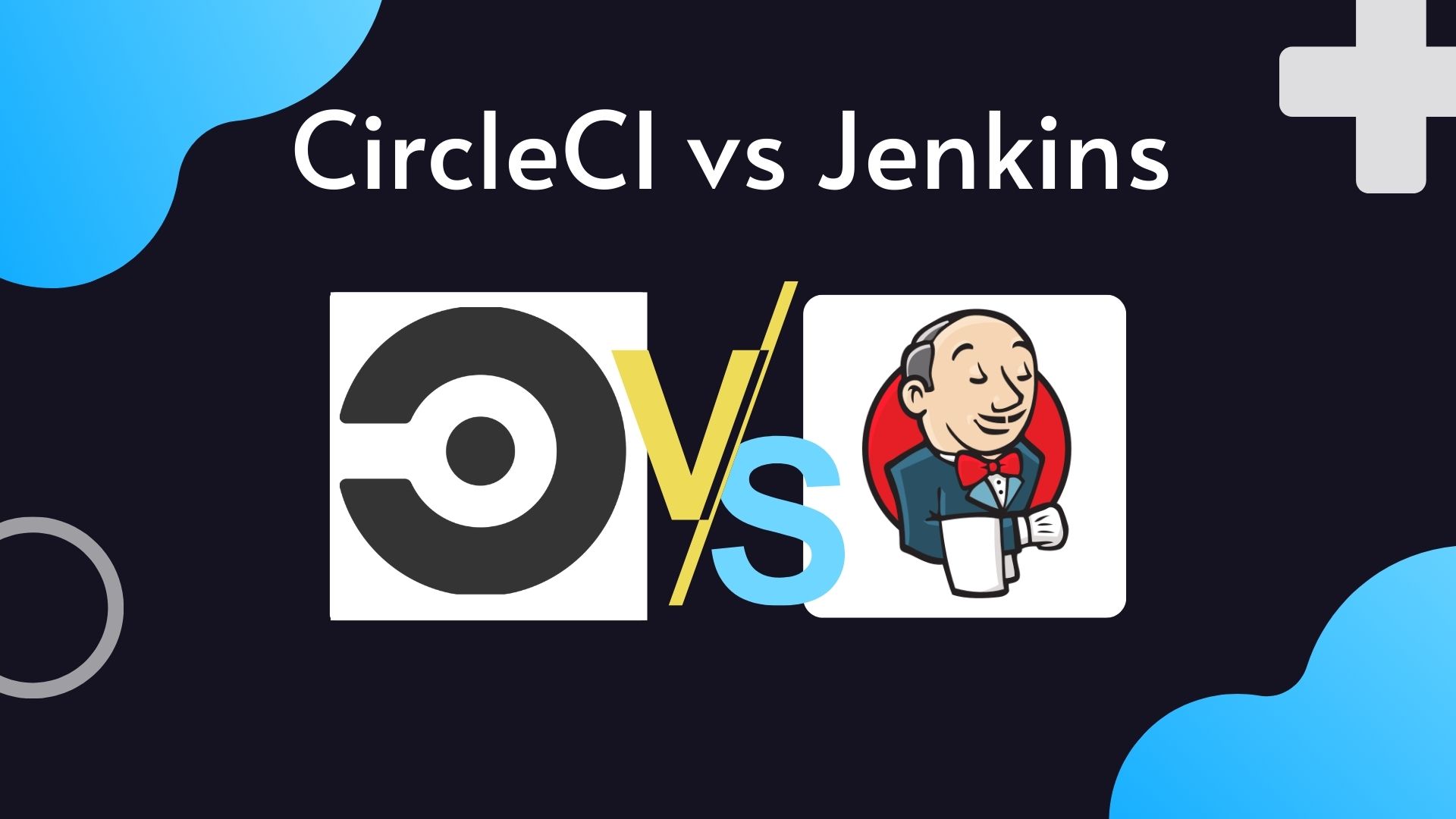 CircleCI vs Jenkins: What’s the Difference?

Jenkins can support multiple jobs by multi-threading, whereas CircleCI has built support for parallelism, which project settings can achieve.

Your deployment pipeline is the most crucial part of your software delivery lifecycle. As you keep launching new software products and updates, the last thing you would want is to manually intervene in an otherwise automated SDLC. Automation of build and release code– continuous integration and delivery have become mainstream for enterprise solutions.

Now when it comes to CI/CD pipelines, the most popular tool you’ll come across is Jenkins. However, more efficient tools have stood out recently in this space – CircleCI is one among them. CircleCIvs Jenkins – which one should you choose? We will help you decide in this blog with a detailed discussion around their expected results and suitability to your needs.

So, understanding the differences between CI vs. CDeployment vs. CDelivery is vital for continuous integration in the software development process. Before discussing the CI/CD tools, let’s figure out what these steps are and why they are essential.

The practice of continuous integration is primarily driven by testing automation. How? With each new commit integrated into the main branch, the code is validated to have not broken the overall application or the system. If all the test cases do not pass, the changes are stopped from getting merged so that developers can prevent any potential issues before integration.

Why is CI Important?

As a software engineer building applications, you don’t often work alone. While working in a team, integrating bug fixes and new features will be the majority of the tasks you will be performing. Continuous integration enables you to conduct repeatable testing through an automated externalized build. Here are the most important benefits and reasons CI is vital for software delivery:

Continuous delivery follows continuous integration. This practice automates the deployment of all the code updates to an environment once all the bugs have been fixed and changes have been merged. Developers can deploy their changes quickly at the end of CI with a single button click. How? The application can be built as a part of this process because of the central code repository, which is driven by CI. So you have a predefined automated release process at the top of test automation.

Why is Continuous Delivery Important?

Continuous Delivery allows you to deploy as frequently as you want and per your business requirements. It is a big plus, especially in today’s fast-paced environment where you want to release in smaller batches to fix the issues end-users face easily and quickly.

Here are some of the top benefits of Continuous Delivery:

Continuous deployment is the final stage in the pipeline. One step after continuous delivery, all the changes that you push through the various stages of your production pipeline are released to the end-users. Your team does not need to manually intervene to deploy new changes to production.

Continuous deployment makes sure you are not waiting for release day to find out the results of your updates. The best thing about continuous deployment is that it takes off the extra stress from your development team as their changes go live within minutes. That also means feedback comes faster from end-users.

Why is Continuous Deployment Important?

The primary plus of continuous deployment is that it helps you automate the deployment to production. What are some other core benefits that highlight its importance? Let’s find out:

CircleCI is a cloud-oriented continuous integration and delivery application that enables the development team to deliver fast with the help of automated build, test, and deployment. The tool can even be configured with complex pipelines, eliminating the requirement of an internal server. Hence, you don’t need to spend a fortune on maintaining a local server. Most importantly, it helps you deploy applications faster than ever, thanks to the offered scalability and robustness.

CircleCI has gained immense popularity, and giants like Facebook, Spotify, Harvest, RedBull, and Teespring are already using it. The ease of setup, performance speed, and efficient build make it stand out.

What is Jenkins UI

Jenkins is an open-source server that enables build automation and executes CI/CD efficiently. One of the very first tools in the continuous integration space (launched in 2005), Jenkins facilitates developers with scripted detections, executes tests, and deploys them to the server.

The tool was originally written in Java and comprised various plugins that deliver the different components of continuous integration. The aspects include static analysis, building, continuous testing, version control system, and configuration management. To perform like a complete CI/CD tool, Jenkins requires the help of extensions. But why are extensions required? Extensions like Ansible help in the continuous development of your software and configure with Jenkins to identify the pipelines.

Here are the core features provided by Jenkins:

CircleCI vs. Jenkins: Head to Head

We dug deep to understand the need for CI/CD and about two of the most popular continuous integration tools, It’s now time to address the elephant in the room – CircleCI vs. Jenkins: what’s the difference? Let’s find out –

CircleCI does not require a dedicated internal server as it is a cloud-hosted platform. Instead, it runs on an online server that can be scaled as per requirements. It is a highly independent solution that automatically executes added code in a fresh container every time.

Jenkins, on the other hand, needs a dedicated server to operate. As Jenkins is hosted locally, the development team has to monitor and maintain the server continuously. Unlike CircleCI, Jenkins is dependent on various plugins for continuous integration. These extensions need to be installed manually, and hence the issues have to be resolved on the way.

While using CIrcleCI, it is possible to build all the running processes in a single file (named circle.yaml). It makes continuous integration as easy as managing a code repository. Sharing configuration details with the team and maintaining a backup becomes hassle-free with CircleCI. Additionally, some information or settings which are confidential is held encrypted.

In the case of Jenkins, builds are set up using Jenkins UI. Hence, all the configurations of various processes are stored in the Jenkins file system. As Jenkins uses a dedicated internal server, sharing the system details within your team is complicated. So cloning source code repositories won’t copy data contained in Jenkins.

CircleCI keeps getting UI updates, and that’s why modern enterprises are primarily inclined towards it. The additional built-in support and responsiveness make CircleCI’s UI smooth for users.

One of the major setbacks for Jenkins is its UI. As Jenkins loads on a local server and has numerous plugins attached, the UI is much slower and less responsive than CircleCI.

Jenkins does allow parallel processing of multiple functions or tests at a given time. However, it’s not efficient and can easily lead to database errors and process breakdown. So multithreading is possible with Jenkins but is inefficient.

CircleCI offers a few options for file encryption. A majority of the data is accessible to all members of the team.

Jenkins servers protect data by encrypting it using Jenkins plugins. However, encryption acts as a roadblock when it comes to the ease of sharing among developers.

CircleCI does provide an inbuilt provision of Docker workflow. To access the same, developers need to update the services part in the “circle.yaml” file.

Jenkins does not offer an inbuilt Docker workflow feature. However, you can install a plugin and then use it.

CircleCI provides flexible pricing options that suit your scalability plans well. A free version also allows you to run only one process at a time. The plans start at $15 per month.

Jenkins is free, but the hosting cost needs to be added. Moreover, the flexibility aspect must be constructed for cost-efficient hosting in Jenkins.

CircleCI is a renowned and trusted CI/CD solution. It is currently being used by some of the biggest brands like Samsung, Ford Motors, Lyft, Coinbase, Facebook, and Harvest.

Jenkins is undoubtedly the most popular name when it comes to CI/CD tools. The primary reasons for its immense popularity are because Jenkins is free and brings widespread community support.

CircleCI: The tool does not need the users to manually monitor and maintain the server. CircleCI executes every new job from your pipeline in a clean container or virtual machine to test and verify each commit. All the dependencies are pre-installed, and your pipelines can be configured to continuously deploy to numerous environments. Troubleshooting in CircleCI is easy, too, thanks to the SSH provision.

CircleCI follows all the different approaches for automated DevOps testing, including integration tests, functional tests, and unit tests. The most prolific benefit of using CircleCI for CI/CD is the independence – it doesn’t require any extensions and functions without a dedicated internal server. So the DevOps team can perform any task they want to accomplish on the host OS without disturbing the builds.

Jenkins: First of all, if you use Jenkins – your DevOps team must take care of Jenkins server maintenance. For effective CI/CD, a number of extensions need to be installed on the server, and each iteration involves debugging the errors.

We all know how tough manual DevOps testing can be for you and your team.

Also read: Why automate your cross-browser testing in continuous delivery?

CircleCI vs. Jenkins: The Verdict

Looking at the above comparison based on numerous parameters, CircleCI emerges as the clear winner. However, there’s one big difference we cannot ignore – Jenkins is a free and open-source CI/CD tool, and CircleCI is a paid tool. Although the pricing is completely flexible in CircleCI, early-stage startups and private projects would deeply consider the free options.

The other side of the coin is – nothing worthy is ever free. Jenkins requires you to set up and maintain your own servers. That can certainly multiply your costs until the servers are comprehensively optimized, which needs time and a plethora of development efforts. And spending more than enough on servers while still not getting a good load speed is undoubtedly frustrating.

Community support and availability of resources are big factors to consider while choosing a CI/CD tool for your enterprise and Jenkins has huge community support. CircleCI, on the other hand, does its best by providing detailed and resourceful content and events for solving most of the problems faced.

So CircleCI vs. Jenkins: what should one choose? Well, it depends on your expectations regarding the convenience offered by a continuous integration tool.

Although both Jenkins and CircleCI are automated and don’t require manual intervention for CI/CD, server configurations form the deciding factor. Jenkins requires manual efforts – many of them actually when it comes to maintaining and optimizing the local server. CircleCI is a completely automated CI/CD tool that charges you a flexible fee.

Choosing the right CI/CD tool is vital for your DevOps. Equally important is integrating the CI/CD solution with a reliable and cloud-based test automation platform.

Merging your DevOps with Testsigma’s cloud-based test automation speeds up your application delivery and makes continuous integration smoother than ever. Here’s how: