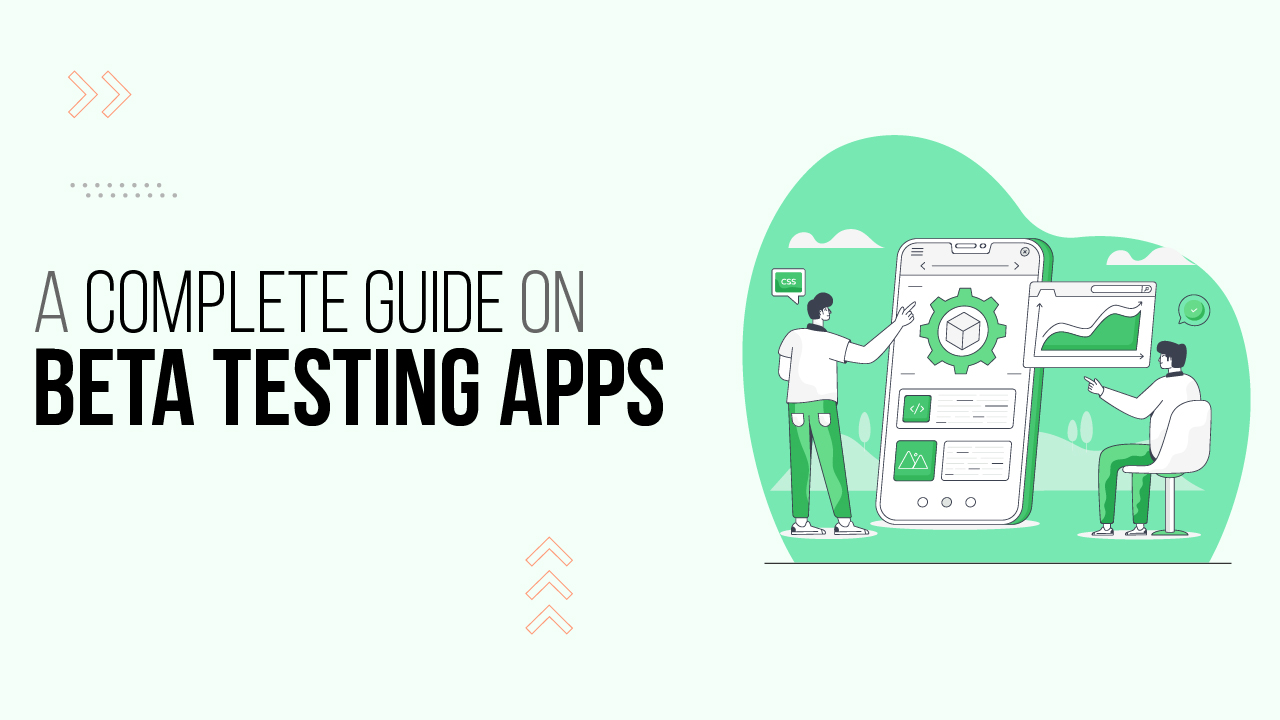 When creating iOS or Android apps, you go through the beta testing stage, often done after alpha testing. Consider this a soft launch for your app, allowing your beta testers to try it and provide feedback on what needs improving and what you can remove. Beta testing apps gain real-world experience and learn how your app will operate when used by actual people.

In this comprehensive guide, we’ll explore the importance of beta testing apps, the benefits of app beta testing platforms, and how to perform beta tests.

Beta testing is a user acceptance test where a group of users evaluates a nearly finished application to see how well it functions in a real-world setting. This application development stage seeks to present your application to a group of actual users and collect input for enhancement. The application has completed beta testing and is almost ready for public release.

Customer validation is used in beta testing to reduce the likelihood that the application will fail. Although beta testing can be expensive and time-consuming, it is an excellent approach to fixing technical problems with your new product.

Some apps have several users who can enrol in early access and beta programs. If it’s already full, space can become available later if existing testers depart or the developer allows other users to join.

There are two types of Beta Testing:

1. Open Beta Testing: This type does not limit the number of participants in the testing process. Open beta testers include anyone interested or from a larger group. As a beta tester, you can download it straight from the website or submit a request to the company to receive the executable file.

2. Closed Beta Testing: The organization restricts app access during closed beta testing. A limited number of people are given access to closed beta versions upon invitation for user testing. This user base acts as a primary testing group to find weaknesses or emphasize the benefits of the app. Before conducting more exhaustive testing, a closed beta test might help gather input and make improvements.

Why Are Beta Testing Apps Important?

After completing the alpha testing process and receiving positive feedback from testers and engineers, the product is made available for beta testing. So, the first inquiry is: Is this method still crucial even after organization members have manually tested it numerous times?

The advantage of the beta testing app is that we can understand user perspectives before making the product available to the public. Furthermore, you receive incredibly accurate performance findings because this testing is conducted outside a controlled testing environment.

Let us look at the ways beta testing can help us:

1. Affordable Solution: Mobile app beta testing saves money and ensures that the app is developed and designed according to plan. A study by IBM says that the cost of fixing problems discovered after the release is 15 times higher than fixing them during development. Because beta testing guarantees that participants find defects after production, it is cost-effective.

2. Detect hidden and complex issues: Beta testing allows you to find bugs that manual testing could overlook. Since several people are participating in the beta tests, each one will utilize the software differently. These methods will assist you in finding tricky problems and enhancing app performance.

3. Localization and Geolocation: Due to the flexibility of having participants from various places do your beta tests, beta testing promotes geolocation testing. The beta testers can assist you in determining whether your app conforms with the laws and ordinances applicable to that specific place. Additionally, localization strengthens by ensuring that your app complies with regional regulations.

4. Improved Application quality: Beta testing involves more parameters, which expands the testing space. Once the app beta testing is complete, we can now get an application that meets all the tester’s expectations.

When is Beta Testing used?

Beta testing app takes place immediately after Alpha Testing finishes before the product is made available to the public (Production Launch / Go Live). Therefore, the product should be at least 90% to 95% finished (stable enough on any platform, with all features either almost or entirely complete).

Since technical products are primarily dependent on platforms and processes, it is ideal for all of them to go through the beta testing phase. Before being released, any product undergoing beta testing should evaluate against a specific Readiness Checklist.

A beta test typically lasts one or two test cycles, each lasting 4 to 6 weeks. After that, it only expands when a new feature adds or the main component changes.

Here are a few scenarios in which app beta testing is necessary:

When you need to collect qualitative data about your users

Beta testing is essential when collecting qualitative data about the users. Qualitative data provide a firsthand evaluation of a system’s usability. By seeing users’ struggles with particular UI elements, researchers can determine which portions of the design are troublesome and which function well. Researchers will then decide whether the UI piece is poorly designed based on their own UX knowledge and on witnessing other participants experience (or not) the same difficulty.

When you want to market your product using influencers

Beta testing tools give you input about your product that you can use to improve it and reveals a lot about your marketing approach. For example, in a market test, you carry out on a smaller scale the same marketing initiatives using influencers you had planned for the official launch of your product—in a particular region or on a single social media platform, for instance.

To make changes to the text, visual and design features (such as clickable call-to-action buttons and streamlined navigation), or deployment strategies of your marketing campaigns, take a look at the statistics and audience responses you get in market testing. Using influencers will make your campaigns more effective and engage a larger audience.

When you want to test new features

Beta testing is an excellent approach to evaluating the new features of your product in the real world. Beta testing can help you gain a thorough understanding of the user experience and involvement in a real-world situation. You can see how a broader audience will accept it after publishing it in the market—users “test drive” the new feature to see how it works.

When you want to gauge when the software is ready

Beta testing confirms that a piece of software or application is operational. It ensures that the software operates without bugs, errors, or other problems and provides the user with the desired results. In addition to identifying flaws in the software currently in use, the software testing process looks for ways to improve the product’s effectiveness, usability, and accuracy.

When you need to test the system’s stability

Beta testing is the most crucial phase in evaluating the application’s stability. Testing for stability helps determine whether a developed product works effectively beyond its breakpoint or maximum operational capacity. It assesses the software’s performance and quality under various environmental conditions. In addition, it describes the product’s capacity to keep working correctly throughout time.

The main goal of beta testing is to determine whether or not the application will crash at any point.

Beta testing is essential to get a good product with less effort. Through client validation, it lowers the chance of product failure. In addition, a business can test post-launch infrastructure via beta testing. Then again, customer feedback aids in enhancing product quality.

Beta testing is very cost-effective in comparison to other data collection techniques. In addition, it fosters consumer loyalty and raises customer satisfaction.

Platforms for beta testing mobile apps enable you to scale more quickly and reach the target market earlier than expected. Any app beta testing platform’s main objective is to ensure the app is high quality and to determine whether it functions as intended.

The advantages of a good app beta testing platform are:

The following considerations must be made when beta testing apps:

The design of the mobile application is the first step in beta testing apps. Before starting any application development or seeing any representations of the application, the design phase is complete. Designing frequently considers the market, business objectives, business scope, etc.

We begin the planning stage as soon as the design is complete. The planning stage outlines the step-by-step process for advancing beta testing apps. While moving forward with rigorous analysis, we must separate the various portions while considering the application and its business objectives.

For instance, we need to write down the dates for which we will conduct each beta testing phase. What sort of queries do we intend to put to the beta testers? How can we reduce the amount of inaccurate beta tester data? Or what kind of beta testers do we need—random, technically skilled, or some other group?

The selection of your application’s beta testers is the next phase. Since you’ve already decided what kind of beta testers you want, all you need to do is identify or create a platform to connect them with you. Many web applications specifically connect you with the appropriate audiences.

Make your pool of testers

Wait for all of the possible testers to respond and approve your proposal. Then, inform them of everything you’re looking for and send them a link to your mobile app’s beta testing on the Play Store, Apple Store, or a downloading link.

Take feedback – Work on them

The following stage is consistently working on the beta testers’ ongoing feedback. This feedback will help in customizing your application to the intended user. It would help if you consider the feedback that fits your design and advances your company’s objectives. Beta testing should uncover unfixed defects, advance organizational objectives, and raise the caliber of the current app.

You can reward your testers as you choose once the beta testing of your apps is complete. For example, you can give them discounts or an early look at the newest features.

There are various tools available that aid in beta testing our applications. Here is a list of the top beta testing tools:

TestFlight is a unique beta testing tool for iOS mobile apps that uses Fastlane to deploy apps to beta testers. iOS developers can distribute their software to beta testers with only one command line.

A well-liked solution for beta testing and app delivery is HockeyApp, shortly to be called Visual Studio App Centre.

Pricing: With an unlimited number of testers for each app, the service is free for developers with fewer than 10 apps. After this, pricing is according to how many apps you have, with options starting at $30 per month for up to 15 apps.

Another beta testing tool, UserExperior, enables companies to test mobile applications with real users before release. As a user opens the app and continues through the end of the session, the tool’s session recordings feature allows businesses to capture every slight contact.

Pricing: Pricing for corporate testing, risk coverage, and automation are available upon request, with a $500 rapid fix plan. Most testing takes over a month, while complicated apps require 2-3 months.

One well-liked beta testing tool is TestFairy. It offers a thorough video of the app’s navigation procedure and how users operate the device’s features. Developers can learn how consumers interact with a mobile app using Test Fairy.

Beta testing has benefits and drawbacks. It occasionally has the potential to render the system unstable or cause unfavourable user feedback. However, we can certainly improve our apps by working on this.

How long is beta testing performed?

Beta testing is performed for a minimum of two weeks to a maximum of 12 weeks. However, most beta tests last between four and eight weeks.

How do I beta-test my Android app?