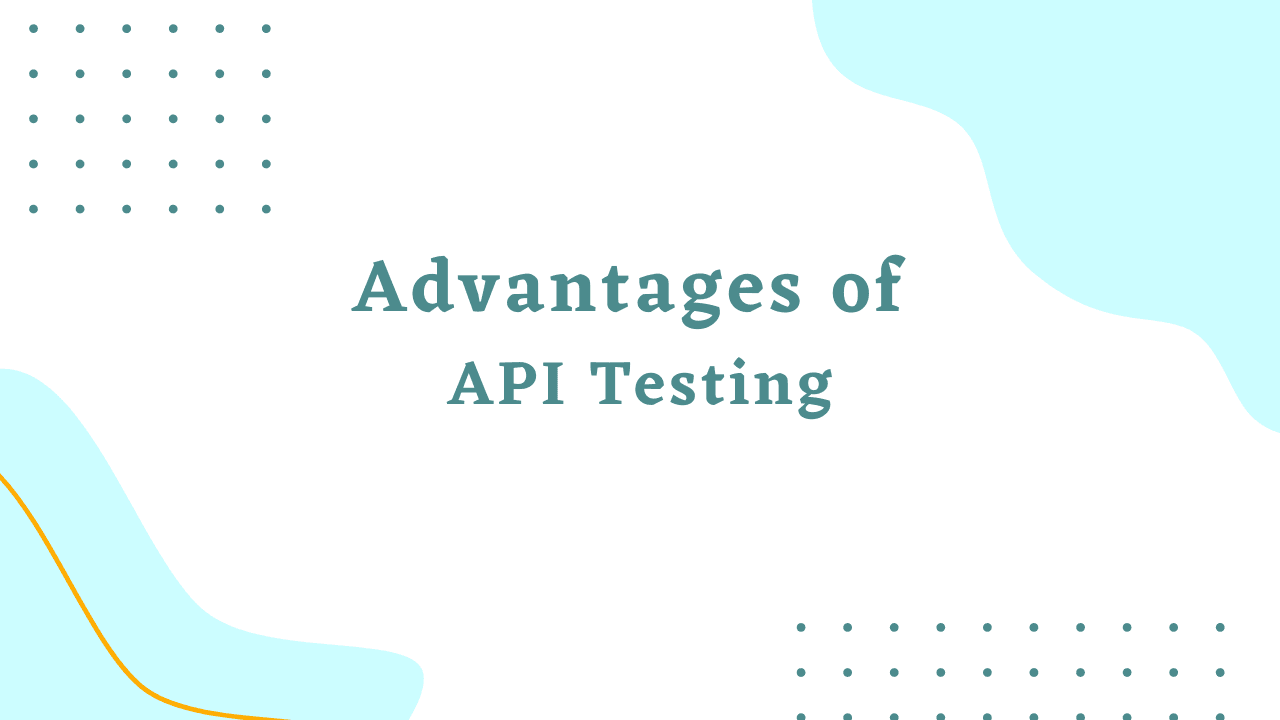 APIs facilitate communication and both-way data trafficking between disparate software systems. API testing validates that these APIs are functional, reliable, secure, and perform optimally. Before going for types and advantages of API testing, let’s first understand API testing and why it matters.

This comprehensive guide will teach you all about API testing. Besides, we’d uncover one of the best automated API testing tools available in the market.

API testing checks whether the business logic of software works as expected and whether the output is in order.

Instead of the mouse-keyboard-voice inputs required for most software tests, API tests require testers to trigger calls to said API, receive output, and monitor if it is up to par. By nature, API tests are fundamentally different from GUI tests. They do not focus on an application’s aesthetics, usability or intuitiveness. They prioritize analyzing and evaluating the business logic behind the system architecture.

Why does API Testing matter?

APIs connect software components. These components could be modules within the same software system or third-party applications your software must integrate with to provide certain functions.

For example, let’s say you offer social media sharing features on an eCommerce site. Every time someone tries to share a post, you need APIs to trigger a connection with said social media site.

API testing ensures that the right APIs work accurately to accomplish these functions. Another fact to note is that since APIs facilitate data exchange between different software systems, they actually travel in and out of each software’s security ecosystem.

That means APIs are more vulnerable to external attacks, hacking, and other malicious activities by hackers and their ilk. Often, hackers launch fake API calls and use their responses to reverse engineer access to sensitive business data (that the API must access to accomplish its task).

Some of the common types of API testing include:

Functional tests check if the API works as expected within specific hardware and software conditions. It requires checking API functioning within the software codebase and monitoring how it works in the real world.

Validation tests check if the software matches business requirements. API tests must match the expected results as defined in the test plan. They should be validated to accomplish every task required to provide software users with the functions they want. This is closely related to User Acceptance Testing.

This checks that the UI associated with API appears visually as it should (to developers, not end-users) in terms of the position of elements and code.

Security tests check that the API endpoints are secure from attackers. It validates that all APIs in the application ecosystem are protected against threats like unauthorized access, data leakage, fuzzy inputs, injection vulnerabilities, parameter interference, etc.

Security tests are particularly important because APIs generally have free access to sensitive data of both business and technical significance. Inadequate security testing could lead to:

This is important to ensure that no API suffers memory leaks or any defects that may put its functionality or even user data at risk.

These tests are meant to highlight any monitoring, errors, resource leaks, execution anomalies, or defects that appear when the API is working.

Usually, APIs are exposed to improper inputs that open them to injection attacks (among other threats). The insights derived from such tests are best for refining security policies and developing patches to update the security of existing software versions (if any).

These tests introduce invalid, unpredictable, and misshapen input parameters into a system to check how it responds. Doing so exposes the software’s propensity towards crashes or information leakage in the event of unexpected inputs. It also lays bare any gaps with regard to security performance or overall functionality.

Let’s look at the significant advantages of API testing:

API tests take a lot less time than GUI tests, because you don’t have a UI to verify and monitor. No need to check design, text, button placement, etc. All that matters is if the API is getting its specified job done.

Consequently, API tests are completed faster, which means testers can focus on more layered, complicated tests that take more time and effort to create and run.

When you run API tests, you are testing the software down to its more granular level, way beneath the UI. API testing verifies the validity of the backend, of the communication channels between requisite databases for performing specific tasks.

This translates to far greater test coverage. When you’re testing an application down to its brass tacks, you’re bound to find more bugs, issues and anomalies that would have otherwise negatively affected end-user experience. The result? Happier users and better quality software.

As mentioned before, API tests require far less time than GUI tests. That means QAs can design and run API tests fast and early on in the pipeline, even before the GUI is ready. This contributes to the shift-left approach to testing, which has proved to be a superior methodology. Run API tests fast, get quick results and resolve issues early on, before you can start testing the actual UI.

Lower Maintenance To Do

Generally, the API layers do not have to be changed or updated too often. This translates to fewer regressions due to new merges or releases. API updates generally happen due to significant business logic changes – which do not occur too often.

All the above factors mean that testers don’t have to spend as much time maintaining API tests or reworking them to accommodate changes.

APIs work fast. You insert the requisite input (the API call), and it brings back the necessary information i.e., it connects to a third-party site or service.

So, testers can know immediately if tests are passing or failing. Once again, this enables earlier detection, diagnosis, and resolution of problems, further facilitating the shift-left approach mentioned earlier.

API tests provide greater coverage, easy maintainability, and return fast results. Obviously, all this adds up to a much lower cost of overall testing. It frees up time, money and resources for other project necessities.

During API tests, data exchange occurs through XML and JSON formats. That means all programming languages can be used to write API tests, be it JavaScript, Java, Python, Ruby, PHP, etc.

The interface of an API is far more stable, compared to the GUI of the application. The GUI is dynamic, and must change periodically to provide features required by end-users and/or business stakeholders.

On the other hand, APIs change less frequently and usually come with fairly detailed documentation. All changes reflect in said documentation, which gives QA engineers a solid reference with which to adjust test cases.

Consequently, you get more stable tests that are also easier to maintain.

Use Testsigma’s intuitive platform to shift your tests left. Automate API tests right for the application design phase, and integrate them flawlessly into your end-to-end functional testing pipeline. Here’s a quick glimpse of what you get when you sign up for Testsigma to run API testing:

Comprehensive API tests are essential to ensuring the quality of any software, inside and out. Given how important they are to the flawless functioning of modern applications, APIs must work as expected under different real-world circumstances.

Testsigma makes API testing exceptionally simple, without compromising an ounce on speed, accuracy and efficacy. Our cloud-based platform strives to provide an all-in-one experience – allowing testers to run API tests as easily as functional and GUI tests. No coding, no scripts, no muss, no fuss.

Why is API Testing faster?

APIs don’t have complex interfaces like an application’s GUI. You don’t have to set up tests to validate design or any aspect except the API’s function – is it responding correctly to API calls? API tests are easier to create and complete faster, which makes API testing faster than other GUI tests.

Why is API testing better than UI testing?

In terms of faster test completion and test maintainability, API testing fares “better” than UI testing. As mentioned above, API tests take less time to complete. The tests are also easier to maintain since APIs don’t have to be upgraded as frequently as end-user-facing features.

Finally, API tests are more stable because of the same reason – they don’t have to be changed to match upgrades as often as the GUI. This also means that you have to run fewer regression tests for APIs.

What API is most frequently used?

The REST(representational state transfer) architecture is the most frequently used approach to creating and deploying highly functional APIs. REST APIs are the most popular ones used in software development and testing.

Which API is the fastest?

While there is no single definitive answer to this question, here are a few API frameworks that generally tend to offer speed and performance:

Shreya has been writing professionally since 2017. Apart from technology, she writes about music and obsesses over her next cup of coffee. When she is not writing, she is reading, looking at cat videos, and waiting for naptime.