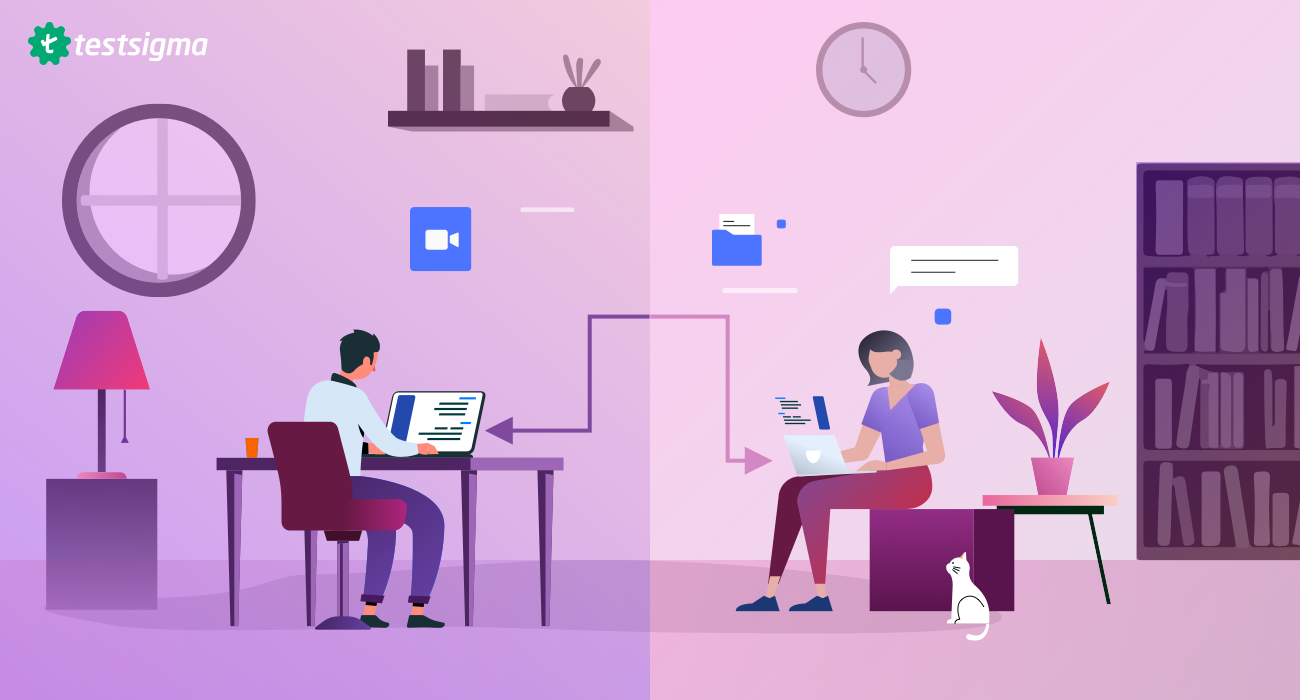 Companies are trying to actively recognize any challenges that their employees are facing.
A major challenge that software testing teams across the globe face today are the dependence on physical machines. Other reasons include dependency on infrastructure and internet for the execution of tasks.

Automation, in various ways, can help testing teams work better in the remote working environment. Some such ways are discussed below:

1. Automate your regression testing: Regression testing may require significant effort if done manually by QE team and multiple iterations can make it more tedious and error-prone.

On the other hand, if the product has test automation in place, it can help a lot in quickly executing the regression tests after any code changes made by developers. This helps a lot in improving the team’s productivity by providing quick feedback on the code changes and catching bugs early on. Also, QE team can continue working on their assigned tasks, meanwhile, test automation is running, thus improving productivity.

Having reliable test automation goes a long way in improving product’s quality and providing the DEV and QE team with the flexibility to work on their own time.

From the perspective of remote work, it becomes all the more important. During remote work, when every person is juggling a number of tasks during the day. Having things automated reduces the burden of regression testing and makes it more efficient.

Developers can get immediate feedback on their code changes through test automation results and rectify problems if any. Thus, independent work in a remote setting becomes easy and manageable.

Similar to regression testing, test-driven development will ensure that developers don’t need to wait on the QE team for feedback. They get real-time feedback for their progress on feature development by running their code through the already existing test cases and analyzing test results.

When TDD is in place, QE and Dev tasks need not be tightly coupled. Thus, it helps in ensuring a flexible work schedule for everyone in the team in a remote work setting.

Having a CI/CD pipeline not only helps developers get immediate feedback on their work but also empowers everyone in the team to work as per their own schedule.

4. Schedule your automated tests to run in the off hours: To avoid being delayed because of the internet connectivity woes, it is better to schedule the test runs for the time when the internet usage is not at its peak. These will be your night hours usually.

5. Start implementing in-sprint test automation to avoid any spillage of automation activities beyond a sprint:

If your organization is implementing scrum, it is better to follow in-sprint test automation for its success. When a story is considered done only after its test cases are automated too – it helps the testing team keeping up with regression testing and development every sprint. This also helps in getting better results from continuous testing and integration.

6. Last but not the least, If you have not already – choose a test automation tool that fits your project requirements:

If a team has not started on automation yet, this time is good to start looking for a good tool. The tool should fit your project requirements and should help enable remote work. Having a cloud-based tool at this time would remove any dependency on infrastructure hosting. Also, it can be accessed by the whole team from anywhere anytime helping distributed teams collaborate better.

Other benefits of Testsigma as the tool to enable your remote work include:

3. Test cases are executed on the cloud that helps in quick feedback for every test run.

4. Highly customizable test execution. Tests can be created and executed as needed. You can run the whole suite, run on the cloud, run on the device, run a subset of test cases.

5. Run the test cases in parallel without any additional setup

6. Easy debugging and maintenance. If there are some resources that are impacted due to another unrelated change, Testsigma compiles and reports them in one place for an easy fix.

7. Test cases for web, mobile and API – all can be automated at one place.

8. Seamless integration with any CI/CD tools you are already using in your organization.

9. End to End test execution and reporting on the cloud – including cross-browser testing.

10. Detailed and customized reporting that can be accessed anytime anywhere.

11. Easily include non-technical members in the test automation workflow for reviews and feedback.

Signup and you are ready to start automating!