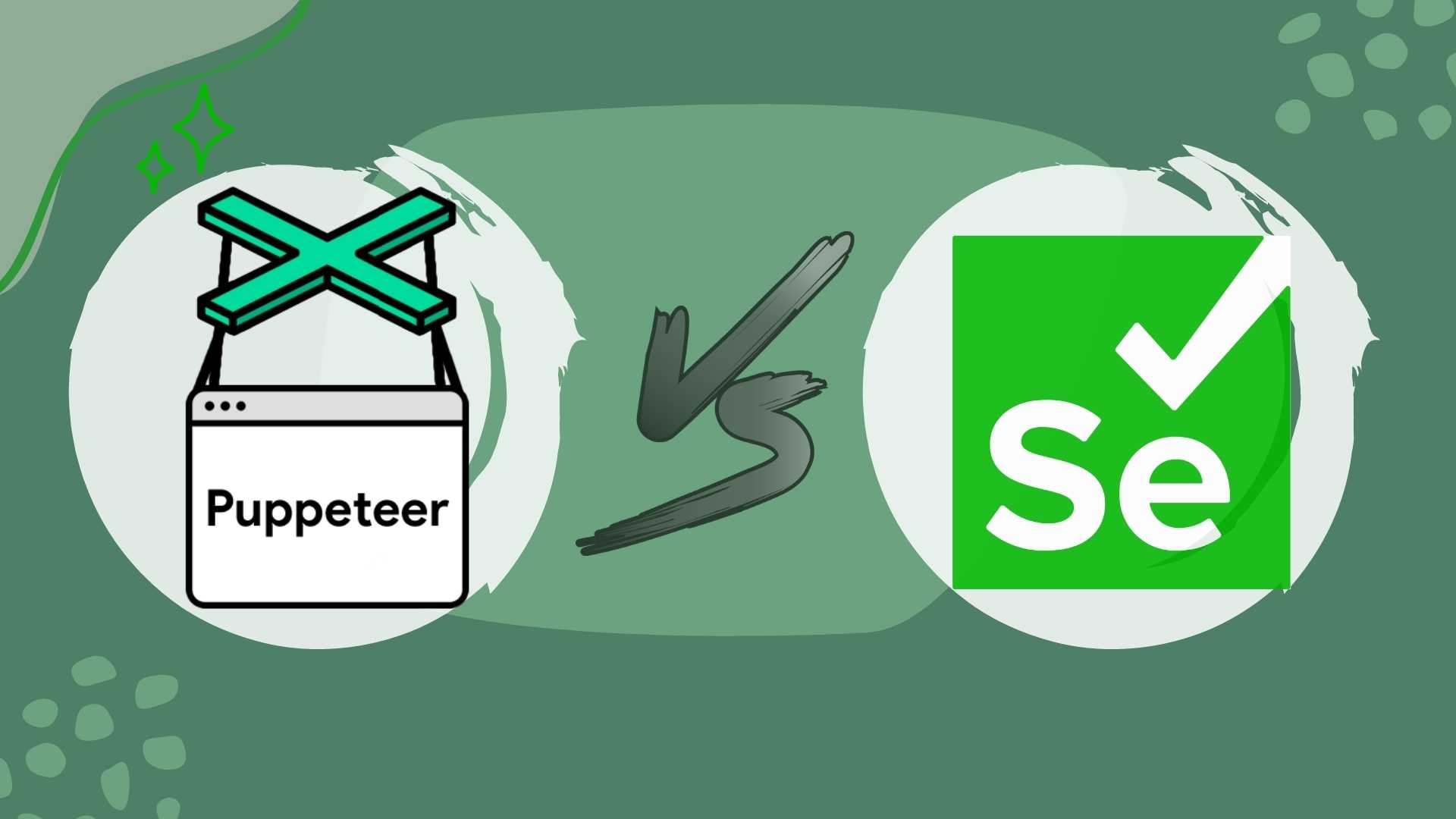 This method of testing the UI of an application to ascertain its functionality is known as UI testing. Covering everything right from corroborating the slightest bit of logic, navigation, calculations, UI workflows, validating all the buttons to transitions, UI testing is a mandatory aspect of executing applications.

The Quality Assurance (QA) teams are accustomed to performing manual UI testing of applications. With the advent of Agile methodology, the QA teams replaced their conventional testing practices with Agile development models and automation frameworks. The teams were motivated to adopt automation to run the test cycles for quicker release of products. Thus, automated UI testing became a norm in software testing pipelines globally.

When it comes to automated UI testing, Selenium and Puppeteer are two formidable names.

There is an ongoing debate on which one is better regarding automated UI testing. We hope to give you a comprehensive understanding of both tools, how they function, and their considerable differences in functionality in this article. Then you can judge which one wins the battle – Puppeteer vs. Selenium.

Selenium was primarily the brainchild of a ThoughtWorks engineer, Jason Higgins, in In 2004, who wrote a JavaScript program capable of controlling the browser’s actions. Sensing his plan’s potential in the automation of web applications, he made it open-source and named it ‘JavaScriptTestRunner.’ which was later re-named Selenium Core.

The Selenium tests are limited to web applications and not for desktop or mobile apps. Due to its broad flexibility, developers use this tool continually for web app testing. It is supported by all three operating systems – Linux, Macintosh (macOS), and Windows as well as by all popular browsers like Chrome, Firefox, and Safari.

The Selenium software is a suite of tools devised to cater to distinct Selenium QA testing needs.

Available as a Chrome plugin and for Mozilla Firefox, the Selenium Integrated Development Environment (IDE) records all the browser interactions to generate codes for each. These generated codes re-test scripts written in various scripting languages. However, the Selenium IDE writes too clumsy codes for an automation test script. Regardless, the native plugins can aid you in reviewing multiple test cases.

The test automation scripts are written in popular programming languages such as C#, Java, .Net, Python, Perl, and Ruby. The Selenium WebDriver has all the components, such as Library, Application Programming Interface (API), and Driver, to construct a functional test automation framework. All of them converged will help you carry out diverse types of automated web application testing.

RC and WebDriver are test automation technologies that support several programming languages but have some key differences. Selenium RC is a testing framework that allows a QA or developer to build test cases in any programming language to automate UI tests for web apps against any HTTP domain. Selenium RC works as two components, one of which handles “client libraries for the desired computer language” and the other as “a server that launches and terminates browsers automatically.”

Assume you have six test cases. You wish to complete your test cases on a remote machine because your local device runs numerous applications. You need to configure the remote server so that the remaining can execute the test cases there, and that’s where Selenium Grid comes in handy.

Selenium Grid’s hub-and-node architecture allows you to run concurrent tests across several browsers. The client-server architecture of the Selenium grid works with the client as ‘Hub’ and the server as a ‘Node.’ When coupled, they comprise the Selenium Grid, The local machine is in charge of activating the test cases, and when they are triggered, the remote device executes them automatically.

Combining tools like TestNG and JUnit with Selenium is the best way to handle test cases and create reports. Integrating Selenium with tools like Jenkins, Mavis, and Docker will help you Execute continuous testing flawlessly. Another pro of using Selenium is to create automation test suites for specific test objects that can be reused and run on different browsers and operating systems.

The Google Puppeteer, had its initial V1 release on 11th January 2018. by a Google team with unparalleled access to the internals of the Chrome browser. being a young kid, It had skyrocketed to become one of the most ubiquitous and popular automation frameworks with  89 releases till now.

At its core, Puppeteer is a Node.js library and browser testing framework. It was written by a Google team, explicitly designing it to deliver a high-level API to control headless Chrome over the DevTools Protocol.

Before the release of Puppeteer, a headless browser built on top of its unique JavaScript engine or an automated headful browser (such as Firefox with Selenium) was used for testing overflows within web applications. This created a trade-off between speed and reliability, which caused Google Puppeteer to remove it.

Unlike Selenium supporting numerous programming languages and browsers, Puppeteer focuses solely on Javascript, Chrome, and Chromium. Instead of acting as a complete browser application testing solution like Selenium, Puppeteer serves as a remote control library for Chrome.

Also, Puppeteer lacks a purpose-built Integrated Development Environment (IDE) like Selenium to manage test suites and write test scripts. However, users can leverage the Puppeteer library by simply writing Javascript codes using their preferred IDE. Users can also use the Puppeteer for data and web scraping, performance and screenshot testing, and automation.

While both Selenium and Puppeteer are open-source browser automation solutions, they have some fundamental differences:

Selenium mandates a more complicated installation process than Google’s Puppeteer to account for all the specific browsers, languages, and modules the user is using. Compared to that, Puppeteer uses Yarn or npm since it is a Node library that users can easily install. Check out Puppeteer on Github.

Selenium Grid supervises the enactment of Selenium tests on various browsers and operating systems, allowing the execution of one test on all platforms. This simultaneous execution of test suites reduces the elapsed time needed to finish application testing.

On the other hand, Puppeteer offers numerous advantages. The primary use is its ability to control the Chrome browser and its accessibility to DevTools Protocol. Since Selenium needs Webdriver to send script commands to the browsers, it is comparatively slower than Puppeteer. In simple words, a complete solution for automating Chrome.

Selenium is an automation framework that tests applications that run on different operating systems (Linux, macOS, and Windows) and in multiple browsers (Safari, Firefox, Chrome, etc.). Since most web applications do not dictate the user to use specific browsers, developers can use Selenium to test their apps for multiple operating systems and browsers. That said, it is also critical to note that Google Chrome manages about two-thirds of the global web traffic. And when it comes to automating Chrome, Puppeteer offers the best solution.

Used in writing test suites and scripts, the Selenium IDE also supports the recording of test scripts, resulting in a dramatic increase in test productivity. However, when compared to the Node.js package approach of Puppeteer, Selenese and Selenium IDE are sets of languages and tools developers need to learn. Puppeteer utilises JavaScript but can access every aspect of the Chrome DevTools protocol.

Contrastingly, Selenese, the programming language used to define Selenium test scripts, is high-level language developers need to learn to write and execute Selenium tests. With the need to gain that knowledge, There is a learning curve with Selenese. It offers a ‘least common denominator approach – the commands can run in Java, JavaScript, Python, C#, and Ruby.

Puppeteer vs. Selenium: Ease of Use

Behaving like every other Node.js package such as npm, HTTP, util, and query string, Puppeteer is easy for experienced JavaScript developers to use. They are already familiar with its code-intensive approach to using its methods, classes, and events. Moreover, Selenium enjoys an edge over Puppeteer in testing automation capabilities that enormously enhance QA productivity.

Due to its support for multiple operating systems, platforms, browsers, and programming languages, Selenium is relatively more complex and customized than Puppeteer. The installation and configuration of Selenium Grid and Selenium WebDriver are non-trivial compared to Puppeteer with npm or Yarn.

So, Which One Should You Choose?

One of the most crucial aspects of web application development is its testing, which is time-consuming, taking up 30%-40% of the time in a standard release cycle. However, using these QA automation tools can drastically boost the productivity and effectiveness of development tools.

Selenium is a full suite of tools designed to support the development and execution of automated tests for multiple operating systems, programming languages, and browsers.

On the other hand, Puppeteer is a Node.js package designed by a Google team to deliver a high-level API to control headless Chrome over the DevTools Protocol.

The crux of the entire debate (Selenium vs. Puppeteer) ultimately boils down to your specific requirements and needs. Your choice of the testing library depends on what you wish to accomplish. There are no winners, losers, or scorecards here.

If your exclusive concentration is on JavaScript and Chrome, then Puppeteer is what you need. The extra focus and power will provide the necessary aspects for your team to set up rapid tests. It will also aid you in controlling other browser functions simultaneously.

If you need to support non-Chrome browsers and require language bindings that aren’t in JavaScript, you already know that Puppeteer won’t work. If not, that is fine. Selenium is a tried-and-true tool used by developers all over the world. If you want to focus on cross-platform testing and support non-Chrome browsers requiring programming languages that are not in JavaScript, then your obvious choice will be Selenium.

Thus whatever your project might be, there is a testing library to suit all your automated testing needs. Take help from any of the tested automation testing tools to write and execute safer, better, and more secure codes. That’s a journey worth taking, regardless of which tool assists you along the route.

With Testsigma, teams can save ample setup time for automated browser tests, and it works with Selenium, where you get the flexibility of raw code or No code. That’s how Testsigma is with fully automated workflow, and there’s nothing more you could ask.