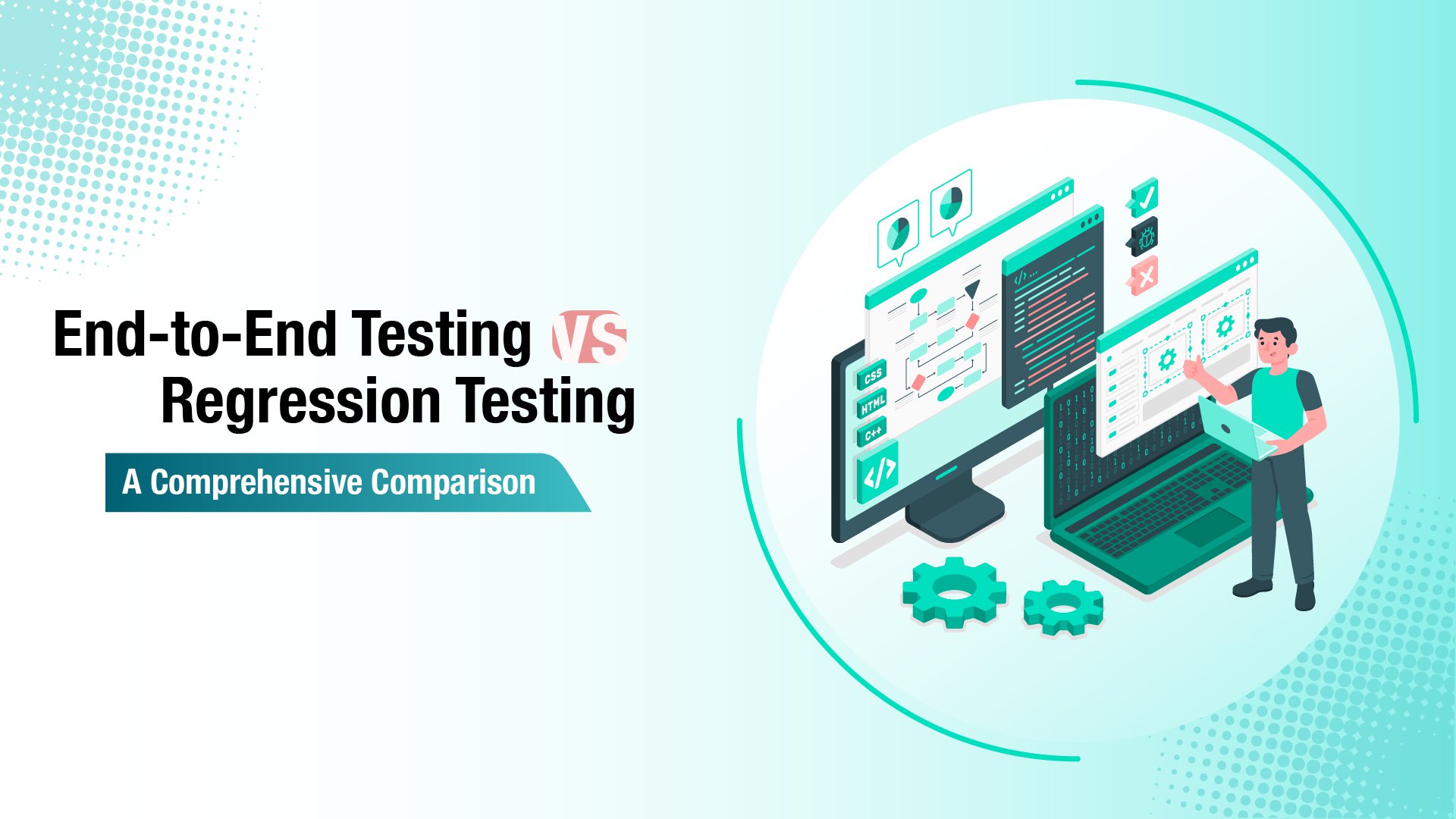 End To End Testing vs Regression Testing: A Comprehensive Comparison

End To End Testing – what is it?

End To End testing is a comprehensive approach covering all aspects of the software development cycle, from requirements gathering to final deployment. This type of testing is crucial because it ensures that the software meets all business and technical requirements and works as expected in all environments.

End To End testing can be divided into two main types:

E2E testing is carried out in two different ways: Horizontal and Vertical. Although both can be beneficial, they are helpful in different ways, and it’s essential to recognize the variations.

The complete application across several platforms will be considered in a horizontal E2E test. It would be best if you had a well-defined methodology and established test environments to conduct this E2E testing. It is always better to pre-arrange setting these up.

Let’s examine an e-commerce application as an illustration. The tester may log into the user account and peruse the company’s items for a horizontal E2E test. After adding a few things to the cart, they would attempt to check out.

The developers and programmers must create practice tests from the user’s standpoint. The best part is that it will assist in resolving workflow difficulties before the program is put into production.

A vertical E2E test dissects the application’s structure into many levels as opposed to a horizontal E2E test, which evaluates the program as a whole. Each layer must undergo individual testing before being subjected to a hierarchical analysis. Thus, a vertical E2E considers these layers rather than the application in terms of process.

Each layer is tested from the bottom up, including all UI, database cells, or API needs. Before going on to the next layer, they are stored apart from the other layers and examined separately.

Even though they are less frequent than horizontal E2E, they might be helpful in some situations. This is especially true when there are layers without a user interface or when there are safety-critical applications.

End-to-end testing has advantages over white-box and black-box testing.

Like horizontal end-to-end testing, black box testing focuses on functionality rather than investigating a system’s or program’s internal workings.

E2E testing: Is it Important?

End-to-end testing is widespread and essential since it:

Although end-to-end testing is an excellent method for evaluating software, it can be challenging to accomplish. Here are a few typical issues that arise during E2E testing:

Slow execution and time consuming: End-to-End tests might be slow to execute since they cover every program component and run through the full software stack, especially compared to alternative testing methodologies that test isolated software components. It might take a while to complete testing that validates workflows through the user interface. Instead, businesses frequently utilize end-to-end testing for the user processes with the highest importance while using unit tests, snapshot tests, and integration tests more frequently for low priorities.

Complex/High maintenance: End-to-end testing is highly complicated since it involves simulating fundamental user interactions, the full software stack, and its dependencies. Therefore, extensive care and troubleshooting may be needed for E2E testing.

Difficulty in finding issues: Compared to a more detailed unit or integration test, when an E2E test fails, further investigation may be required to identify and resolve the problem.

Difficulty in environment testing: End to End testing might be more intricate and expansive in structure when compared to other testing methods. So separate scripts must be implemented to execute in various environments and browsers. This can’t be a viable method of obtaining results quickly.

What does Regression Testing entail?

Regression testing is a type of testing that is used to verify that changes to a software system have not introduced new bugs. This is usually done by re-running existing tests to see if they still pass the recent changes. Sometimes, further tests are also created to exercise the new changes specifically.

Regression tests come in 7 different varieties. It always boils down to choosing the one that is ideal for you.

This is a problematic testing technique, as the name would imply, and all the system’s components must be tested afresh from scratch. This also entails testing every feature of a given product and reusing all test cases, even in areas or portions where no change has been made or created. Even if this kind of test is not recommended for a minor issue or change in the existing product, it is worth doing to know the system’s current state.

This regression test evaluates how the newly introduced code would affect the already installed application software. Selective regression testing uses a subset of test cases to examine the impacted code. This saves time and effort from creating a new test case and lowers retesting costs.

This regression testing method is applied if significant changes appear in your test code. This is utilized primarily when there is a substantial modification to the software’s underlying code. Major companies use this testing method to cope with customer demands.

Your modules may have been in the pipeline for a while. When you merge those individual modules with a standard code mainline, partial testing is carried out, primarily using the existing test cases.

One of the most critical aspects of testing is unit regression testing. This test ensures that any resulting dependencies are blocked out throughout the test, even if it is primarily focused on the coding unit.

If you’re wondering why regression testing is vital, assume that a problem develops every time you update the code. Regression testing is used to preclude this. Because it enables developers to continuously improve programs without affecting the end user’s experience, it assures compatibility with current features and the functionality of new programs.

Many tools are available for end-to-end testing, but these handful of tools are practical and effective.

Avo Assure: With only a few button clicks, you can test whole business processes with Avo Assure, a 100% scriptless test automation solution.

What is the difference between E2E from Regression Testing?

Difference between E2E from Regression Testing is – Regression testing ensures that what worked yesterday still works, despite any modifications in SDLC where End-to-end testing involves testing a business process as a whole, From “end to end.”

Let’s have a look at End to End testing vs Regression testing key differences:

The broader range of testing coverage is a significant and shared benefit of end-to-end testing and regression testing. The most important lesson for businesses considering using any of these testing approaches is that, despite the abundance of benefits, each one has a considerable amount of maintenance baggage to deal with.

As discussed along with their advantages, disadvantages, and comparison in this blog, end-to-end regression testing with Testsigma saves time, avoids problems, and frees your employees to focus on developing applications. End-to-end testing may be a crucial component of comprehensive software testing, especially given its methodology. At the same time, the methods used for regression testing are primarily technical and at the component level. Due to these factors, businesses should select appropriate testing methods, provide sufficient resources, and leverage solutions like Testsigma to test and offer a reliable, high-quality user experience. Check out the “How to select the right Automated Regression Testing Tool?” for more information on how to think and choose a testing method for your business effectively.

Create a free account with Testsigma to see how automating your tests may help you find issues earlier and shorten release cycles!