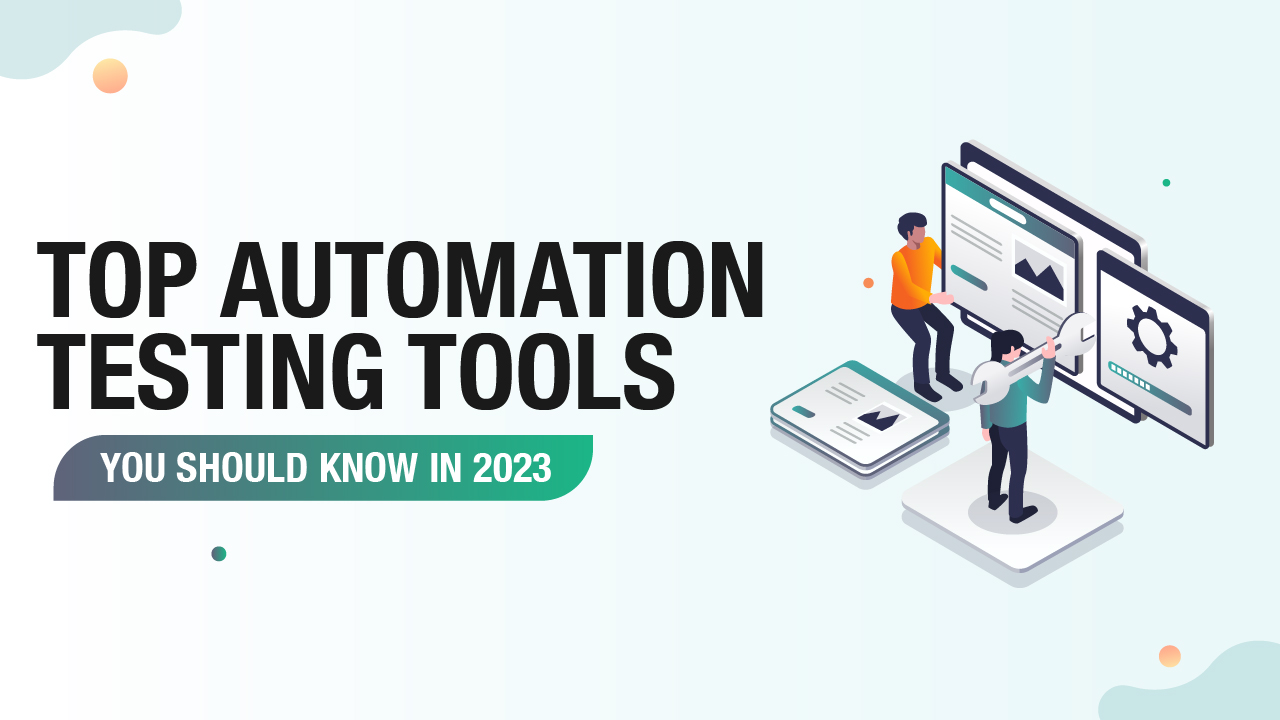 Top Automation Testing Tools You Should Know In 2023

For today’s continuous development streams, automated testing is the optimal solution. You can choose from various automation testing tools and frameworks to create and run successful test cases. Although finding the ideal test automation solution is challenging. In this blog, we’ll examine how to select the right framework for your company and go in-depth on the best automation testing tools available on the market.

Automation Testing Tools: How to choose the right one

The development cycle no longer includes testing as a phase. Instead, testing has become more common as development becomes more continuous. Test automation is the most successful way to increase test cycle effectiveness, efficiency, and coverage. The steps listed below can help you choose the right tool:

Even though there are many automation testing tools on the market, your business case may require a specific tool with the right features and solutions.

Some of the top automation testing tools you may check out in 2023 are listed below:

Testsigma is one of the most excellent testing products in the market. The feature of using plain English to automate even complex tests makes Testsigma the most likely tool. Testsigma is an AI-driven test automation platform that effectively meets the demands of continuous delivery. It offers a test automation ecosystem with every component needed for constant testing. In addition, it enables you to automate Web, mobile, and API testing, while supporting thousands of device/OS/browser combinations locally and in the cloud.

Selenium is an open source automated testing tool for web applications. Because it offers configurable test automation and is accessible across a wide range of languages and browsers, it is frequently utilized by quality analysts worldwide.

Selenium is a primary option for automation testing, but we should be open to different frameworks and tools that can simplify our lives.

The extensive documentation, as well as the numerous libraries that supply, make this open-source solution well-known. In addition, it also permits network traffic interception and application code mocking—features that are difficult to find in other test automation solutions with an emphasis on end-to-end testing.

Eggplant Functional is a GUI automation testing solution for mobile, desktop, and web apps. Using an image-based methodology, a single script may automate a range of platform and technology combinations. Users can create test scenarios involving their established application codebase and test its functioning across various hardware or operating systems using one or more scripts.

It can be set up and used on Linux, macOS X, and Windows operating systems. In addition, Jenkins, HPE Quality Center, IBM Rational Quality Manager, and other application lifecycle management tools can integrate with the Eggplant automated testing tool.

Tricentis Tosca is a complete automation tool for online, API, mobile, and desktop testing. You may run various tests, including exploratory and system integration tests. It uses a novel model-based testing methodology that enables users to scan an application’s UI or APIs to produce a model known to the business for the creation and upkeep of tests.

To obtain precise performance data for your web server, you can perform various testing activities, such as performance, load, stress, regression, and functional testing. In addition, JMeter can be used to evaluate helpful APIs as well.

Robot Framework is an open-source framework used for test automation, particularly for acceptance testing and test-driven development. It offers a keyword-driven paradigm and is extensible with various tools and libraries. Test automation and robotic process automation (RPA) are both possible with the use of the Robot Framework. It is widely utilized across numerous applications and enables easy tool integration for versatile and potent automation solutions.

To handle AngularJS and Angular applications, use Protractor, an open-source end-to-end automation testing tool. One advantage of Protractor is that it will automatically go on to the next test stage after all remaining webpage tasks are over. In addition, it functions as an integrator of many technologies, including Selenium WebDriver, Jasmine, and NodeJS. Besides, it’s helpful for regression testing with non-Angular apps.

Cons of using a Protractor:

Another open-source favorite among many is the Playwright, a test automation toolkit created by Microsoft’s contributors. Chromium, Firefox, and WebKit browser automation utilize a single API and a NodeJS module. Like Cypress, it is licensed under the Apache 2.0 license and supports various programming languages, including C#, Java, NodeJS, and Python.

Puppeteer is a Node library that offers a high-level API for controlling headless Chrome using the DevTools Protocol. It helps automate the Chrome browser to execute website tests.

Fundamentally speaking, Puppeteer is an automation tool. Besides, it is well-liked for use cases like scraping and producing PDFs, among others.

Taiko is an open-source, free tool for automated browser testing that ThoughtWorks created. It uses the Node.js module to automate the Chrome browser. The tool allows you to create more readable and maintainable JavaScript tests.

Taiko approaches the browser as a “black box,” in contrast to other testing frameworks. It allows you to create scripts without looking at a website’s source code.

Google developed Espresso, a native framework for automated testing on Android. The tool is simple to use for native mobile programming and is a component of the Android SDK.Use Espresso to develop straightforward, accurate, and concise Android UI tests. When attempting to locate and interact with UI elements, test authors can leverage Espresso API to think and act like an app user. Espresso makes it possible to construct tests that closely mirror the logic of an Android application.

If you want to create various test cases to execute UI operations and record the outcomes, get basic interfaces through XCUITest. It is Apple’s exclusive framework. Unfortunately, it cannot be used natively on Windows because it needs Xcode to function. So, your only option is to utilize a Mac.

Cucumber is a cross-platform tool for behavior-driven development (BDD) that creates acceptance tests for web applications. Without regard to technical expertise, one can write more comprehensible tests. Cucumber offers a solid foundation that makes it simple to build functional tests.

TestNG, a multi-purpose automated testing framework, takes its cues from JUnit. NG stands for “Next Generation.” E2E and integration testing are possible with TestNG as an extension of UI testing. End-to-end testing is thus made simpler with TestNG.

JUnit 5 offers an extensible Java testing framework that can handle a variety of testing styles. JUnit 5 aims to provide an upgrade that streamlines the testing procedure while simultaneously making it more straightforward and using alternative strategies like property-based testing.

Jest is a simple JavaScript automated testing tool. Several web and mobile app development frameworks, such as Node, Babel, Vue, TypeScript, React, and others, may efficiently operate along with Jest. One can obtain real-time snapshots when running the tests or through inline embedding. Besides, tests can be conducted in parallel as often as necessary for improved performance. Jest also has a comprehensive toolbox for enhanced performance.

One of the most influential open-source JavaScript testing frameworks is Jasmine. Run it on any JavaScript-powered platform to avoid interfering with the IDE or the application. It has a syntax that is simple to read.

The need for numerous setups when using Jasmine is a severe disadvantage. Before using it, the user must choose an assertion library or a mocking framework. It will be helpful if your project calls for this flexibility. Otherwise, the configuration process might be very frustrating.

There are many other such automation testing tools in the market besides the ones mentioned above. These, too, have a promising future. Here’s the list:

What is a QA automation tool?

A process of automating the tests of apps and software programs is known as QA automation (or automated testing). QA automation tools primarily carry out manual, repetitive testing tasks previously done by a human tester.

How many distinct tool types are employed in automation testing?

What are the backend automation testing tools?