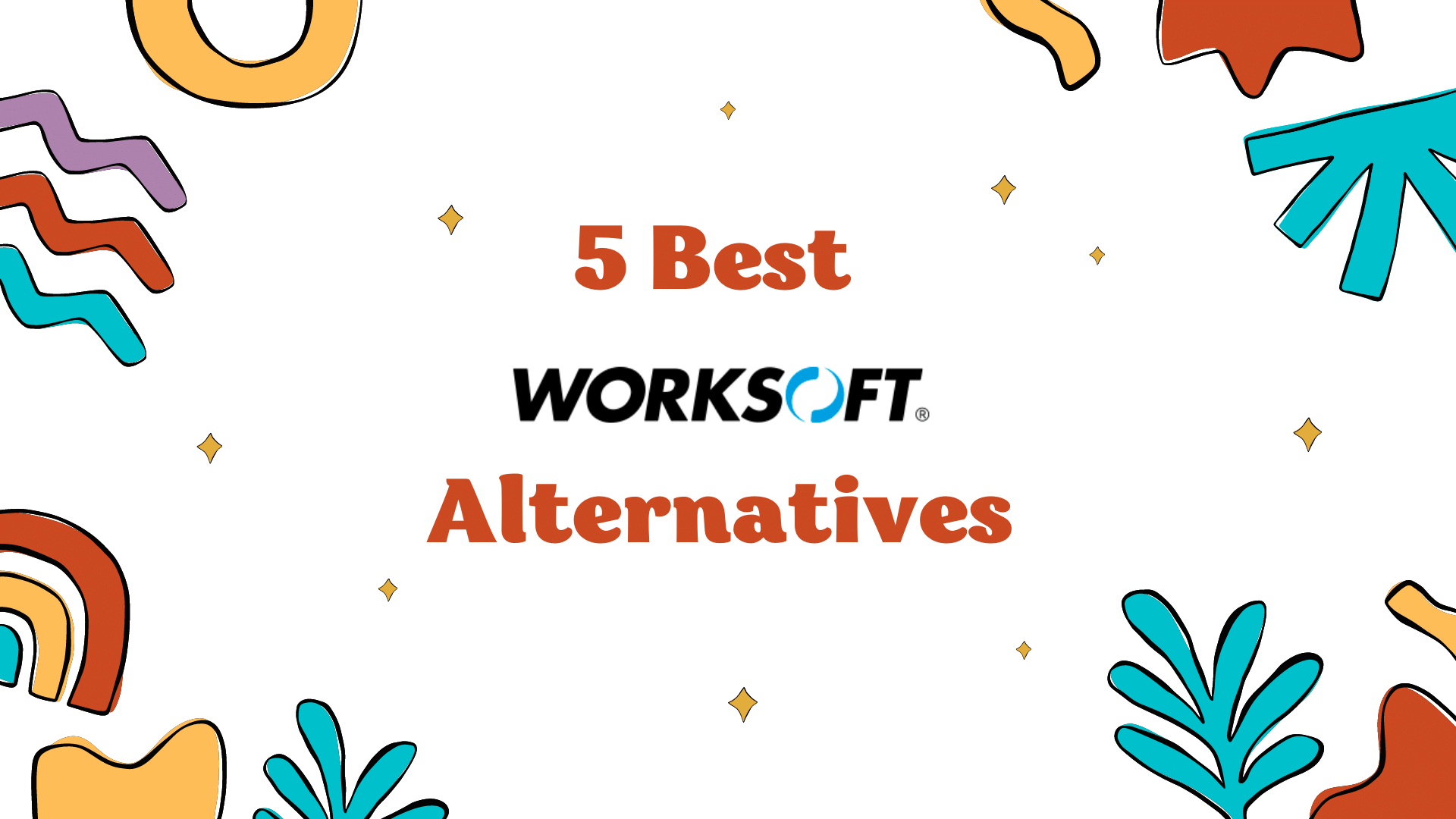 When it comes to automation testing, Worksoft Certify has impressed thousands of users. However, this automation platform has also been chided for its inability to work properly with web-based applications and for not being open-source.

If Worksoft doesn’t work for your business, it’s time to start looking for a smart and efficient alternative. In this post, we list some of the best Worksoft alternatives.

Worksoft Certify: Why is this Automated Testing Platform so popular

From automation testing for packaged software to enterprise applications, Worksoft Certify has shown a lot of growth over the past few years. Apart from running web automation tests, this tool has shown remarkable success in functional testing, regression testing, and performance testing.

It also has the ability to automate web applications without seeking assistance from any intermediary tool. You can also improve your business process outcomes and develop operational efficiencies with the help of this tool. It comes with cross-browser support and has the capability to work with different platforms like Java, Web, Desktop, etc.

One of the main reasons why users prefer this tool is because of its seamless SAP automation testing. This is the best tool for the SAP platform, which is why it has gained so much fame among software developers. The initial setup is pretty easy, and the online customer support system is very cooperative.

With so many benefits, this tool could have been the best tool for web apps if it did not have some major drawbacks.

This test automation tool cannot customize the test data results and does not bear a powerful OCR framework for managing automated tests. There is also minimum flexibility in test management due to no involvement in coding.

One of the biggest disadvantages of Worksoft is that it is not an open-source tool. So, this tool tends to have slower automated testing, pricier license, and limited options when working with web-based apps.

Although Worksoft Certify has an effective role in test automation, regression testing, and performance testing, its limitations are still difficult to get past. This is why you need some excellent Worksoft Certify alternatives to manage your projects and apps.

Finding an automated testing platform can be a challenging task, especially when there are so many to choose from. Have a look at our top alternatives for Worksoft Certify-

When it comes to automation tests, Testsigma can do just about everything. From functional testing to data driven testing, to parallelization, cross-browser testing, multi-device end-to-end testing and visual testing, there’s nothing you can’t achieve with Testsigma.

This test automation tool has been developed to fully support mobile testing, web testing, and API testing. Beginners with minimum HTML knowledge can easily work with this tool, as it doesn’t require a lot of coding expertise.

Testsigma works without any coded setup, so a wide range of users, from testers to engineers, can use it freely. Testsigma is also one of the few leading open source alternatives to Worksoft. This free version is not possible with Worksoft. With Testsigma, the ease of use and flexibility has opened doors to QA engineers, software development engineers in test (SDET) as well as QA analysts and manual testers. It allows you to write or generate automated tests for web, mobile apps, and APIs in plain English, which makes them easy to create, edit, and maintain.

You can enjoy the live support and 24/7 online support from the customer service team of Testsigma. Among the highlights are its complete test management platform, making it a Salesforce for test automation, and its built-in integration with a wide range of CICD tools like Codeship, CircleCI, GitHub, LT Browser and more for the most cohesively automated pipeline.

One of the best alternatives that you can consider for Worksoft Certify is the Tricentis Tosca solution. The reason why this one is so popular in the market is because of its ability to provide a codeless and user-friendly experience.

If you’re in need of a testing platform for UI-based scenarios for your applications, Tricentis Tosca should be a good choice. Not only does it perform a better job at real device testing, but it also has decent reporting and analytics.

Worksoft Vs. Tricentis Tosca – Which One Shows Better Regression Testing?

Tricentis Tosca is definitely a better cloud solution for regression testing compared to Worksoft. Worksoft shows limitations to functional test automation, which is not the case with Tricentis.

Tricentis covers a lot of testing options starting from software testing, mobile testing, application development, and so on.

Tricentis Tosca has pricing flexibility, smooth end to end testing and ability to integrate with NeoLoad, DATPROF, HexaWise, and so on. This is one of the better tools for security testing and cross-browser testing.

If you’re an amateur at test execution and you want something that will not require coding knowledge, Tricentis Tosca is right up your alley.

This is an evergreen test automation tool designed to provide the fastest and most efficient service to software testers, development teams, and business enterprises.

It comes with built-in project templates to make the automation quick and easy. You can also find ready-made test case libraries and object cache to start your test automation as fast as possible.

Worksoft Vs. Katalon Studio – How Are They Different?

When it comes to a flawless end to end testing, Katalon Studio does a better job than Worksoft. Katalon Studio supports both Windows and Mac. Its free version is an amazing opportunity for beginners to easily learn and achieve test automation skills. This test tool also does a great job with functional, mobile, automated, and API testing, which is not possible with Worksoft. Worksoft also lags behind in parameterized testing and supporting parallel execution, both of which are perfectly supported by Katalon Studio. One feature that we admired about this test tool is it has a user-friendly approach and targets testers and developers of all kinds of fields. From beginners to experts, everyone can have an amazing experience with this tool. The recording utility ensures maximum reusability by securing all the UI attributes. If you’re looking for a nice, well rounded test automation tool, Katalon Studio is going to do wonders for you.

LambdaTest has been one of the most popular functional testing cloud solutions for a long time. Its ability to manage and supervise scalable automated tests has always fascinated software testers and developers.

This tool helps to obtain maximum browser coverage by running tests over multiple browsers, real mobile devices, and mobile applications. It also comes with a safe and secure Selenium Grid that helps run Selenium tests in a short duration of time.

Besides, the addition of the Cypress CLI in this tool assists in broadening the Cypress test coverage to a wide range of browsers across different platforms.

When it comes to automated testing, LambdaTest is one step ahead of Worksoft. Its capability to support Windows, Mac and SAAS makes this software better than many other tools in the market.

LambdaTest targets a much bigger audience of developers of web and mobile applications, SAAS business companies, software companies, and QA analysts. But with Worksoft, the audience is limited to only software testers and developers.

The 24/7 live support feature of LambdaTest is a blessing to many testers and engineers, which is not possible with Worksoft. To make things easier, LambdaTest also comes with a free trial and free version features. Worksoft does not provide such a feature.

The performance and test automation capacities of LambdaTest, with its functional software testing, parallel execution, requirement-based testing, and reporting features are great.

Another notable feature of this tool is its integrations with a large number of web-based services like Jira Software and Work Management, Backlog, BitBucket, and GitHub. We also liked the incorporation of Selenium Grid and Cypress CLI to ensure better browser coverage for operating devices and systems.

If your biggest concerns are smooth automated testing, running seamless manual tests, and controlling the pace of test cases, LambdaTest will not disappoint you.

If you’ve been in the software testing industry for quite some time, you must have heard of the automation platform Micro Focus UFT One.

This automation tool covers test automation for web applications, mobile applications, mainframe applications, and desktop-based applications. It works at a faster pace than most testing tools and does a satisfactory job at performance testing. The free version of this tool is very convenient for occasional testers and software developers.

Worksoft Certify Vs. Micro Focus – Which Is a Better Option for Performance Testing?

When it comes to conducting smooth performance tests, Micro Focus is definitely a better automation platform compared to Worksoft.

Its ability to carry out API testing is phenomenal. Worksoft only deals with automated and functional testing, so its testing options are quite limited. However, with Micro Focus, you can try out a lot of testing options, including regression, software, and interface testing.

We hope our list of the top Worksoft Certify alternatives can help you in choosing an automation tool that can work with test execution and improve mobile application and web browser performance.

We recommend choosing Testsigma as Worksoft alternative because of their intelligent end to end test automation abilities, scalable pricing, and integrations.