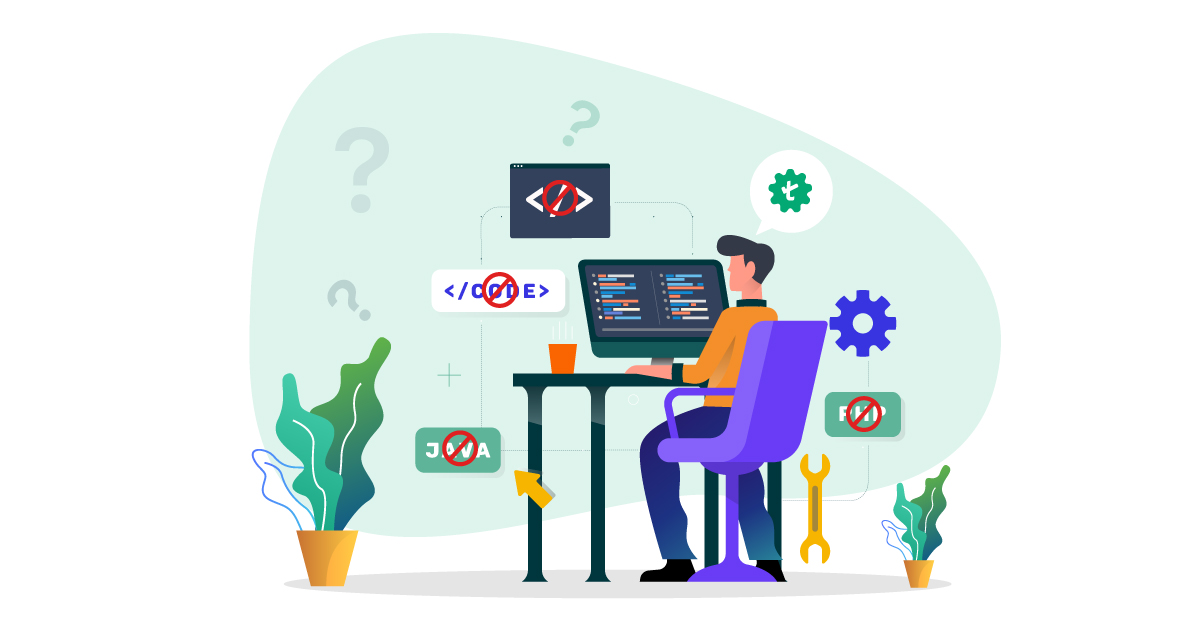 With the advancement in technology together with the advent of Agile and DevOps, the software industry is witnessing many changes. Testing, being the part of the software arena, is also advancing to great new heights.

From manual testing to record-and-playback tools, then to automation testing and now to codeless test automation, we have traversed a long path.

And as we know only change is constant, there will be further advancements to make this journey more fun and fruitful.

What is codeless test automation?

The testing scripts are integrated with frameworks like TestNG, Cucumber, Selenium Webdriver etc. to make the scripts more advanced and high-quality.

There could be multiple ways the automation tool can cater to this feature. Either the tool may read the user’s navigation and clicks, and finally, create a script for those actions. Another way could be that the tester writes the test case in natural language and based on the elements mentioned the tool creates the script.

Codeless test automation does not mean that there is NO script. If automation is there then definitely scripting will be a part of it, only that this script will be automatically created from codeless automated steps written by the Tester.

This codeless automation will reduce the upfront time required to write the test scripts and setting up of the framework. Also, it becomes easier for the tester to use such codeless test automation tools. Even a manual tester with limited knowledge of scripting can start using the codeless automation testing tools.

There are many codeless test automation tools available today in the market. Below are a few examples of codeless automation testing tools-

1. Testsigma: A cloud-based test automation platform. Here, test cases can be automated using simple English. The execution and reporting are handled on the cloud.

2. Test Complete: A tool that uses keyword-driven testing to enable scriptless test automation. Here, each action is associated with a keyword which can be added in a script by the user.

3. Ghost inspector: A tool that records user actions on the UI and compares screenshots too, to enable scriptless test automation.

4. Ranorex: Ranorex allows record and playback for simpler scenarios and coding for the complicated ones.

The testers need not have strong coding skills in case of codeless test automation tools.

Basic knowledge is acceptable since the tool itself will be taking care of the scripting part. Usually, the user-interface of a codeless automation testing tool is such that it eradicates the complexity from the script development. The easy to understand user interface makes the test case scripting so much easier than anyone with the functional knowledge of the application can do it.

The upfront time required in writing the scripts for test cases, creation of the framework, training the team and maintenance is reduced considerably.

The test cases can be developed in minimum time and the execution may start real quick. Moreover, once a testing framework is ready, with time and new changes the framework requires maintenance. Sometimes this becomes a major setback, especially in an Agile environment. These codeless test automation tools also employ AI/ML technologies for automatic healing of changes thus time is saved and can be utilised in other testing activities.

We need tests to be run on multiple ranges of browsers and different platforms, a good codeless test automation tool accommodates all of these features.

With codeless automation testing tools, this task is as easy as the script creation. The framework provided by the tool follows a particular structure and architecture, this results in a properly managed framework. Proper structure helps in achieving better traceability and maintenance.

Also, there are tools like Testsigma that have the feature for self-healing where if a test case fails due to some minor changes in the code structure – they are corrected automatically.

With most of the maintenance headache taken by the AI/ML capabilities. The test cases created via these tools are more reliable too. As we have seen in the above point, the codeless test automation tools follow a structured architecture with reusability being the key element. The multiple application type testing support, cross-browser and cross-platform support provides better coverage and hence enhances the reliability.

The codeless test automation tools are built with the intent of reusability. The test steps which are generic and common in test cases are made reusable. Whenever needed, these reusable test steps are inserted in the test case, reducing the script size. Whenever a change occurs in the reusable script, only that test script is impacted and all other test cases are intact.

In case of scripting the tests ourselves using scripting languages, we need to write custom scripts for the reporting also. For example, testNG and cucumber provide reports after the test run but still, we need to write basic code for the incorporation of the custom reports. Codeless test automation tools have the best features available with them, the reporting is better and easy as compared to scripting the code ourselves.

9. Best bet in an Agile environment

The fast-paced code development/deployment in an Agile environment leads to lesser time for coding the automation testing scripts. In such a situation, codeless automation testing tools seem to be the best option available. We need not train the existing people in a new programming language to write test scripts. Also, the time that would be consumed in writing test scripts can be used in other testing activities like- exploratory testing, performance testing etc.

When we are working with automation testing tools/frameworks, the ROI (Return on investment)  is a major deciding factor. Reason being the amount of time, effort, cost invested in writing and designing an automation testing framework is really high if this all is done from scratch. We need to carefully examine our requirements and the features and return the framework is going to provide. The investment we have made should not outweigh the return we will receive in future.

Because of all these initial setups and investments made in an automation testing tool, the SAF(Scriptless Automation Framework) or tool seems better where ROI is concerned. The initial test case setup and writing will be quicker and we can start the testing as soon as possible.

Testsigma, a codeless test automation tool offers you above features along with scalable cloud infrastructure and 24 hours of dedicated support.

The name scriptless is sort of deceiving here, it doesn’t necessarily mean a complete absence of script or code. It is, however, the absence of writing the code ourselves, the code gets generated by the tool. The tool creates the script using the user-action on the application, or the tester specifies test steps using keywords or natural language. These user-actions or the keyword-based test steps are converted to the code by the tool for execution and here lies the beauty of it.

2. Coded automation cannot be added via these tools

Most people hear codeless and then they think that it should be limited in functionality. And if they needed to add some custom functionality then it wouldn’t be possible. But, that is not the case. There are tools like Testsigma that understand that there could be scenarios where you may want to write custom code to add custom automation capabilities. And these tools provide you with the ability to add the custom code along with the codeless scripts.

While the codeless automation testing tools have reusability and maintainability as a basic feature. Any changes in the script are easily accommodated while working with codeless test automation tools.

More about this here.

4. No coding skills are required by testers

The codeless test automation tool will cover the scripting part of testing for us. But there will always be complex scenarios which will require some coding in-between by the testers to cover the scenario in an optimum way. How can we achieve this if we don’t have the coding skill? So we can assume that most of the test scripts will be generated by the codeless test automation tool, but there could be situations where a polishing in code would be required by the testers. Codeless automation testing tools will provide us with ease, comfort and time-efficiency, but we can not fully ignore the coding skills.

Using tools offering codeless test automation has its own benefits of faster ROI, ease of test case creation, reusability, maintainability, time-efficiency etc. It is the latest trend in the testing community, which is here to stay. Benefits of codeless test automation have become more evident in the last couple of years, especially in the Agile and DevOps environment.

Whenever a new technology or trend enters the market, it stays longer if it is able to fulfil the majority of requirements and provides ease and comfort to the user. Which as we can see is being done by the codeless test automation tools currently.

However, it will not completely remove the scripting of the automation test by testers any time soon but is a major aid to the testing activities of the organisation.