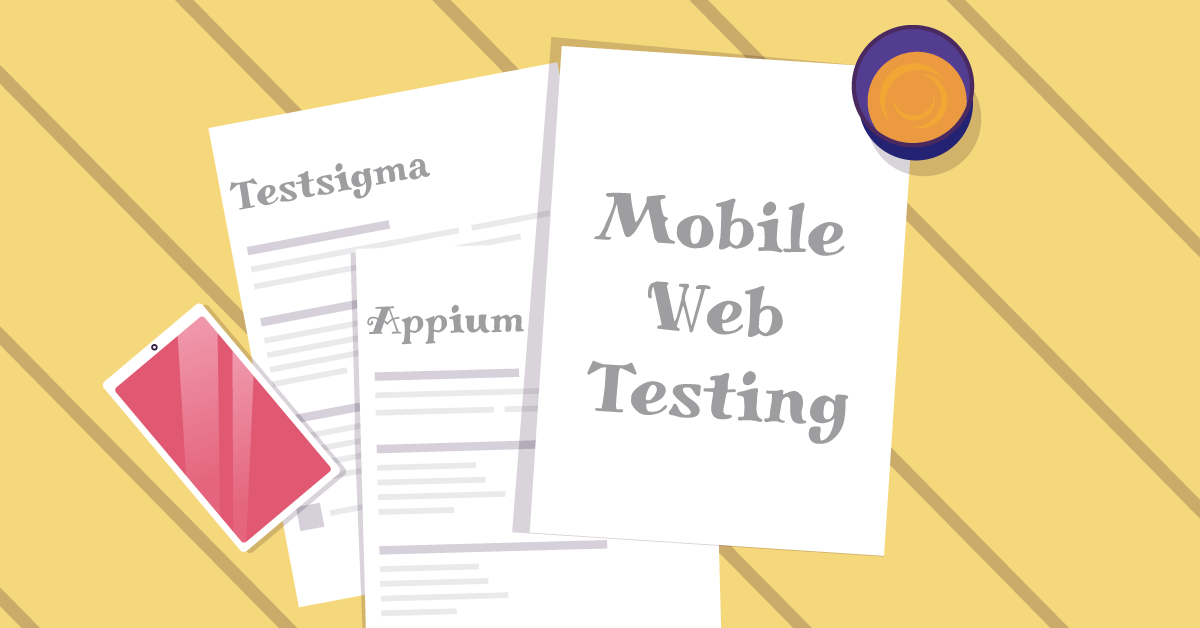 With the increased usage of smartphones in recent years, enterprises and the software industry now have to cater their applications to mobile devices for web testing in addition to desktops. Usually, there are three types of applications that are meant to be used in mobile phones. These are –

i. Native Apps: Apps that are written and built using SDKs and native APIs. These can be downloaded from the official app stores.

ii. Web Apps: These are applications that are often written in scripting languages such as HTML, CSS, JS, etc., and are deployed using a web server. These can be accessed by navigating using web browsers.

iii. Hybrid Apps:  They are a mixture of the above two modes. They have a native “shell” with a fair amount of native UI along with a web view which is an embedded web browser.

Predominantly, there are two sets of tools that can cater to all your testing requirements when it comes to mobile web testing. The first one is a set of Selenium-based or web-driver-based tools and the other is the set of scriptless automation tools.

In this article, we are going to compare and discuss two tools – Appium and Testsigma, from each category, that are currently dominating their own share of the market.

This time, it needs to be tested parallelly along with other features to ensure that the application is working well for all dependencies. With every new feature that is introduced, it’s essential that the developer performs thorough testing.

However, performing manual testing in such cases on all types of devices and browsers is extremely difficult and time-consuming. Moreover, suppose, if the application is hybrid (works both as native and on the web), it becomes quite difficult to identify the right platform and perform comprehensive tests manually.

In such cases, developers can use Appium to automate their tests. Appium is a cross-platform tool that allows you to create and execute tests on multiple platforms, using the same APIs. It is widely used for regression testing on mobile web applications that are updated frequently with new features.

It is an HTTP server written using NodeJs and drives Android and iOS sessions using WebDriver protocol. The Appium server can differentiate the test cases based on the platform defined using a set of key-value pairs (called DesiredCapabilities) used to define the desired test environment.

An Appium-based mobile web test is essentially the same thing as a Selenium test. It takes care of launching required browsers, gets you automatically into the web context so that you can get hold of features such as finding CSS elements, navigation, etc.

It is platform-independent meaning there is no difference in how you write your test cases for different platforms. Regardless of the browsers or the type of devices you use, the Appium tests remain the same.

It requires you to install several pre-requisites such as Android SDK, JDK, NodeJs, Eclipse, Selenium Server JAR, Appium Client library, Appium for Desktop, etc. After you are done with installing all the requisites, the way it works is described below.

Due to such complex requirements, it becomes very difficult to customize the tests especially for conducting tests on complex applications. Nowadays, due to the ever-increasing competition, companies require quick and efficient methods to perform mobile web testing that can generate accurate results with in-depth reports.

That’s why they are rapidly shifting their testing processes to automated tools such as Testsigma, which can cater to all their requirements quickly and accurately.

In contrast to Appium, Testsigma is a scriptless, cloud-based test automation tool that allows you to create test cases for mobile web testing using simple natural language. that you want to test either manually or automatically using the recording tool provided by Testsigma.

Performing mobile web testing using Testsigma is quite easy when compared to complex Selenium-based testing tools like Appium. Its easy-to-use and unified interface allow you to create test cases easily incorporating all the UI and functional components that you want to test.

You simply need to upload the .apk or any other application file, create simple test cases, and choose the device and platform. That’s it. You are good to go. Testsigma provides 2000+ combinations of browser and device combinations so that you can perform thorough testing on all these devices simultaneously.

Let’s consider a scenario. Suppose, you as a developer, have a testing requirement for a complex mobile web application that requires to be resolved during the development sprint itself. It requires to be tested on multiple device types on multiple browsers.

Now, since the application has complex requirements, performing manual tests multiple times becomes a hefty task. In such cases, you need an automated tool, which will allow you to create test cases quickly, and incorporate all UI and functional components that are critical to bugs.

It’s also essential that it doesn’t require you to have prior knowledge of all the programming languages so that you can perform testing quickly and efficiently.

This is where an automated tool like Testsigma rightly fits in. With access to a plethora of browser-device combinations available on-demand and features such as parallel execution of test cases, performing mobile web testing is just a matter of seconds. When exploring Appium, this is a tool you should definitely have a look at.

You don’t need to set up any test environment or install any additional software to perform mobile web testing with Testsigma. You just need to have an account registered with Testsigma to get started.

Why should you choose Testsigma over Appium?

Most development teams today adopt agile methodologies to carry out project developments. This requires performing thorough and in-sprint regression tests throughout the development lifecycle. Performing such tests on huge test cases and complex applications require continuous monitoring and a lot of time and resources.

Thus, it’s essential that enterprises should shift their mobile web testing processes to a more robust and automated testing tool like Testsigma. Here’s a list of features and their comparisons with Appium, that allows Testsigma to sit right on top of the deck when it comes to mobile web testing.

Implement your mobile web testing without any hassles with Testsigma

No doubt, both these tools have their own share of advantages when it comes to mobile web testing. However, with the changing requirements and introduction to complex features, enterprises need to be on top of their game in order to gain a competitive advantage.

Thus, faster delivery of software products is essential which can only be ensured after quick and thorough testing of applications. Performing tests on such complex applications manually is a hectic task and require continuous monitoring.

Moreover, selenium-based or WebDriver-based tools don’t fit well in the agile development environment which is the go-to methodology for most software development teams today. Hence, it’s very essential that enterprises now shift their testing process to a complete automated environment that would help them to test and deliver applications quickly.

Tools like Testsigma allow you to get access to automated test environments with easy-to-access real mobile devices hosted on the cloud. With access to a plethora of features, it would surely make your testing experience seamless.

Mobile testing: Most critical scenarios you shouldn’t miss to test

Testsigma as a mobile testing tool – how can it help me achieve ROI faster?

What are the advantages of automating your mobile testing on the cloud?