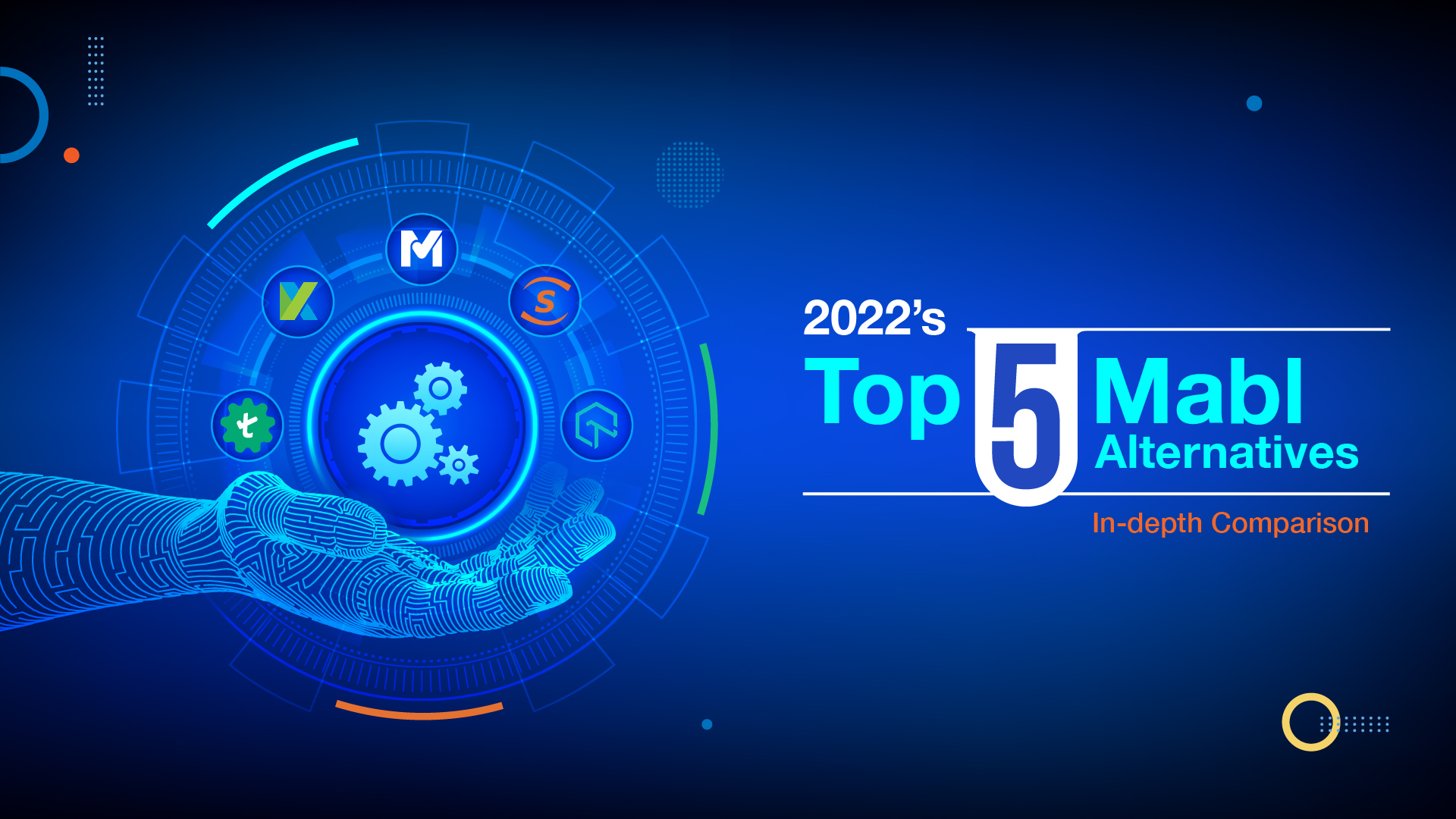 Mabl is a fairly new tool in the test automation market.

Despite being widely popular, Mabl has also had issues such as frequent broken links, slow service, and underdeveloped web engineering background.

If you’re facing the same problems and looking for a smart and decent alternative, you’ve come to the right place.

We’ve covered some of the best Mabl alternatives that will make a difference in the performance of your applications.

Mabl: Why People Use This Test Automation Platform ?

Mabl, founded by Dan Belcher and Izzy Azer in 2017, opened many doors for web developers in the automation field. It was designed to improve the quality of AI and machine learning.

Mabl gained massive recognition because of its ability to execute tests and detect any kind of defects. Besides, it provides incredible cross-browser support, which is a big deal to web designers and developers.

This automation platform also has a smart UI design that offers periodic test run-time. Many developers love keeping track of plans through this platform. Quality assurance teams also prioritize this tool for boosting their test coverage.

However, everything has its pros and cons. Even with its wide popularity, Mabl has received lots of negative reviews. This SaaS solution lacks authentication and variables, so web engineering lags much behind.

It also shows broken links with no information on the request timeout and status codes. Even the service is relatively slow, so if you’re working on something that needs a quick fix – this platform might fail you.

Since this automation tool comes with many drawbacks, it’s a good idea to look for an alternative that will meet all your requirements.

If you want the positive features of Mabl in a tool and move on from its negative side, we’ve got suitable options for you. Check out these five outstanding alternatives to Mabl:

Testsigma has recently gained popularity because of its competence in API testing, automated testing, functional testing, and test management. It can be a fantastic substitute for Mabl, especially for users who want the added benefits of a free version.

This accessible automation platform can work with a wide range of applications like Web apps, Android apps, iOS apps & APIs. With a built-in codeless automated testing feature and compatibility with complex test outlines, this testing tool is an excellent option for budding developers.

Testsigma vs. Mabl – Which one does test automation better?

Testsigma is better at running automated tests than Mabl as the latter doesn’t support platforms like Windows, Mac, Linux, etc. Mabl can only work with the SaaS platform to develop tests. However, Testsigma is perfectly capable of supporting all platforms along with SaaS. Testsigma also comes with 24/7 live support, which is missing with Mabl.

Unlike Mabl, you can enjoy a free version with Testsigma, which is great for novices or small-budget companies. Mabl also lacks mobile testing, performance testing, and continuous testing management features, which are essential for test creation. However, Testsigma allows software developers to run mobile testing and test management.

You can also find a hierarchical view and Unicode compliance with Testsigma, making it a better alternative to Mabl. With so many exciting features, this is a perfect pick for developers.

Testsigma has a lot of smart features that impressed us. We love that it supports parallel and parameterized testing along with sanity, smoke, and system testing. Another noteworthy feature is its continuous integration with GitHub, Jenkins, Jira Software, Slack, Bugzilla, CircleCI, CodeShip, and Freshrelease.

We also liked the analytics/reporting option, which is something Mabl fails to provide. This feature can improve the test creation of multiple browsers, web apps, and software applications.

If you want something completely different and effective for generating quality test scripts, Testsigma should be your top choice. Unlike any other tool, this software testing platform can bring out the best in automated testing, planning, and executing test scripts.

This tool can run automated tests thoroughly, from web interfaces and APIs to iOS and Android mobiles. You also get test recording benefits on this platform.

Mabl vs. Katalon Studio – How are they different?

Although Mabl and Katalon Studio are amazing automation testing platforms, they differ significantly. Both have excellent cross-browser support and cross-device testing features, but Katalon Studio is still a better option than Mabl.

Katalon Studio offers live testing and monitoring feature, which is not present in Mabl. Besides cross browser and API testing, Katalon Studio provides keyword-driven and data-driven testing. The service is relatively fast compared to Mabl, and there is a reduced risk of coming across broken links.

We were pretty impressed with this exciting alternative to Mabl. Katalon Studio has plenty of advanced features to make automation solutions easy for business ventures.

We loved this platform’s playback and built-in templates that ensured smooth management. Besides, the easy-to-use interface and integrations with Jira Software and Slack are a plus point for enterprises and software development teams.

Katalon Studio is an excellent alternative to Mabl, thanks to its reliable customer service and easy integration.

Testim is a leading cloud platform that targets codeless and coded end-to-end testing. With a smart interface and compatibility with machine learning, this automation tool can be an excellent alternative to Mabl.

From test automation and analysis to execution and maintenance – there’s nothing this cloud platform can’t do. You can run tests on various operating systems and browsers utilizing different data specifications in Testim.

Testim vs. Mabl – What’s the difference?

Unlike Mabl, Testim allows users to try a free version before moving to the paid subscription.Whereas only a limited period free trial option is available with Mabl.

Testim also supports mobile testing and is a perfect option for developers and testers who need quick automated testing for mobile apps.

This platform allows you to work on improving the quality and performance of your websites rather than solving end-to-end test issues. It also does a great job at inscribing different automation points compared to Mabl.

We were quite impressed with the performance of Testim. The best feature of this platform is its ability to manage the code libraries and versions so that developers can fully emphasize improving their test automation.

Another thing we liked about this cloud platform is the Smart Locators mechanism, which is incredible. This mechanism allows easy recognition of elements despite a change in UI. Even if there was a minor issue, the support team addressed and managed it in no time.

If you’re looking for an excellent Mabl alternative with smooth onboarding, intelligent test automation, outstanding support, and a fantastic web crawling facility, Testim is the best automation tool for you.

Finding something that excels in automated and manual testing is pretty challenging. Luckily, SpiraTest is there for you.

This incredible testing tool allows you to conduct both automated and manual testing in the same domain. The best part is that you get real-time reporting, bug tracking, and testing with this tool.

Launching scripts for a wide range of automation engines is easy with SpiraTest. From Selenium to Ranorex – you can work with different engines and achieve satisfactory results using SpiraTest.

SpiraTest vs. Mabl – Which one is better at manual tests?

SpiraTest is among the best Mabl alternatives, considering its brilliant test automation service and easy usage. This cloud platform has made both automated and manual testing effortless and facile.

Unlike Mabl, this tool can support Windows along with SaaS. It targets an audience of QA teams, managers, and software testers, whereas the use of Mabl is only limited to software testers and development teams. SpiraTest has a better approach to manual test management compared to Mabl.

While Mabl deals with automated and functional testing, SpiraTest provides many other facilities. Everything is possible with SpiraTest, from continuous testing, issue tracking, quality management, and requirements management to test management.

We liked the integration of SpiraTest with different project management systems, including Jira Software, Jira Work Management, RemoteLaunch, and SpiraCapture.

The features that highly impressed us were the personalized executive dashboards and customizable workflows. The customizable options make this a fully flexible functional testing tool.

Moreover, we also liked the real-time charts and bug tracking system. The support team is always on standby and is capable of doing quick fixes in a short time.

Overall, SpiraTest is an excellent testing tool for developers and small companies who want something effective for their websites.

Lambdatest has been popular among developers and QA engineers for quite some time. Its ability to conduct automated testing on thousands of browsers is why this tool has gained so much recognition.

This platform allows cross-browser testing and live testing for Windows, Mac, Android, and iOS mobile applications – which is incredible. It comes with a free trial option that allows developers to look at what they’re being offered without paying for the full subscription.

Users can also enjoy a free version of the tool, which is a smart option for small budget companies, SaaS businesses, and application developers.

LambdaTest vs. Mabl – How do they differ?

Compared to Mabl, you can get a lot of benefits from the test automation services of LambdaTest. This tool is capable of working with multiple platforms. Mabl works only with SaaS, while LambdaTest can support Windows and Mac.

LambdaTest is our favorite automation platform for running live web automation tests. We liked the fact that LambdaTest can integrate with a wide range of applications like Slack, GitHub, GitLab, and CircleCI, unlike Mabl.

The automated screenshot testing option is a convenient feature for many budding developers.

We were also impressed with the robust automation framework and the 24/7 live support, making it a handy tool for app developers who want quick solutions faster.

If you’re looking for an effortless test automation tool to improve your websites and operating systems, LambdaTest will not disappoint you. It is one of the best software testing tools for cross-browser testing, usability testing, performance testing, and desktop testing.

Bringing it to an end, we can say that all of the automation platforms listed above are excellent Mabl alternatives. Our top choice, without a doubt, is Testsigma because of its ability to conduct automation testing on different browsers and applications.

Testsigma’s competence in functional testing and running rigorous automated tests is one of the main reasons it serves as an exceptional alternative to Mabl.