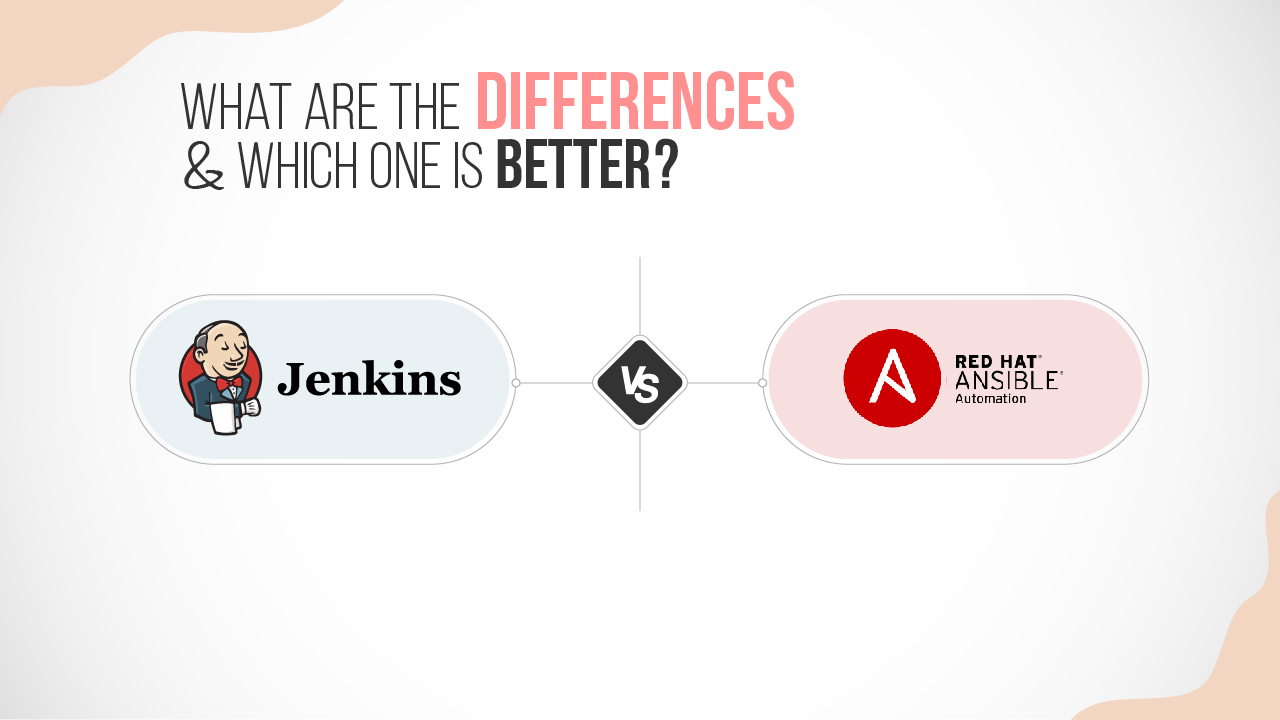 Jenkins vs Ansible: What are the Differences and Which One is Better?

Jenkins and Ansible have been well-acclaimed by developers worldwide. Jenkins is used primarily for building and testing software projects, while Ansible is used for managing and automating the configuration and deployment of infrastructure and applications. In this article, we have illustrated the differences between Jenkins vs. Ansible.

Jenkins is a popular open-source automation server that offers numerous plugins for automating, building, and deploying any project. It is server-based and is akin to the Apache Tomcat web server. It aims to provide simpler methods that streamline continuous integration and continuous delivery (CI/CD).

Jenkins is compatible with nearly every programming language and source code repository that uses pipelines. It is also well used for the automation of routine development tasks. Jenkins provides a faster and more reliable way to integrate a chain of tools designed for building, testing, and deploying without needing to create scripts for every step.

With over 147,000 installations worldwide, it has helped software companies accelerate development operations. Jenkins has garnered a name for itself with its monitoring of the repeated tasks arising during project development. Some other advantages are listed below:-

All software applications, no matter how perfectly built, come with flaws. Jenkins, too, has certain limitations. Some of the cons of Jenkins have been listed below:-

Jenkins is popular because of the numerous helpful features that it offers to developers. Some of the popular features of Jenkins are listed below:-

Jenkins is the most popular open-source platform available for free and entirely dependent on extensive community support. Being open-source and widely used, you are bound to find support regarding any issue from robust communities of online agile teams.

Ansible is another popular software tool offering simple and powerful automation for cross-platform computer support. IT professionals widely use it to deploy applications and update servers and workstations. It is also used for configuration management, intra-service orchestration, cloud provisioning, and the like. Ansible offers support for almost everything related to the routined administrating of systems.

Ansible is not dependent on agent software and has no additional security infrastructure. Therefore, it makes deployment easy. Everything requires to be written in simple script form. This makes conducting version control easy.

Ansible comes with a bevy of advantages that make it one of the most popular software testing platforms among developers:-

Since Ansible is fairly new, it has quite a few downsides. As a developer, it is important to keep them in mind so you can choose the right tools. Some disadvantages are listed below:-

Ansible, as an open-source automation platform, comes with several features that make it indispensable. Some of the prominent features of Ansible are listed below:-

Ansible is an open-source automation platform that is free to use. As for its support, you can contact the Red Hat Customer Support available in your region. It also has a robust and engaged user community that can help solve queries.

What Is The Difference Between Ansible and Jenkins?

Many open-source platforms are dedicated to automation, starting from CircleCI, Jenkins, Ansible, Maven, and the like. We have listed the important differences between Ansible and Jenkins in the table below:-

Ansible vs Jenkins: Which is better?

Jenkins is often regarded as a more effective solution for continuous integration (CI) and continuous delivery (CD) procedures. Jenkins has support for testing frameworks, code coverage tools, and static analysis tools, among other capabilities and plugins for creating, testing, and deploying software updates.

Jenkins, for example, may be set up to execute tests whenever code is submitted to a version control repository or on a regular basis. It may also be set to send test results to developers and generate reports on test coverage and other metrics. Jenkins also has a number of plugins for interacting with testing frameworks and tools such as JUnit and Selenium.

Meanwhile, Ansible is primarily a configuration management and orchestration tool used to automate infrastructure and application deployment, setup, and administration. Ansible may be used to automate testing, but it is not as extensive or specialized for this purpose as Jenkins.

Jenkins and Ansible can be used as part of a larger testing and deployment pipeline. Jenkins, for example, may be used to develop and test software changes, and Ansible to deploy such changes to production environments. Jenkins is the preferred solution for smaller jobs that need the use of many tools, such as build, testing, and code quality analysis.

Ansible is the ideal tool for complex infrastructures with too many servers. It is known for its efficient system of inventory management, which is great for managing systems. In summary, Jenkins is generally considered to be a better tool for testing software projects, while Ansible is better suited for automating the deployment, configuration, and management of infrastructure and applications. Both these tools can be used together as part of a larger testing and deployment pipeline.

Both tools boast great community support. However, Ansible is preferred if users are looking for support because the developer behind it, Redhat, backs it up. Both Jenkins and Ansible are popular tools in the software development and DevOps communities, but Jenkins has a larger user base and a longer history.

How to Integrate Ansible in Jenkins?

In the following section, we have described the steps to integrate Ansible in Jenkins using Apache Tomcat.

The main site.yml file is developed in the directory named /var/lib/Jenkins/workspace/<Jenkins-Job-Name>.

Jenkins and Ansible have been well-received amongst developers. These two automation technologies have simplified the efficient running of operations. However, when it comes to the matter of choice, you need to weigh out your options. Choose the tool that is best suited for your business needs.

For optimized open-source test automation, you can opt for Testsigma. It is a completely customizable platform where you can build end-to-end tests faster and more effectively. Testsigma can be easily integrated with CI/CD and testing automation tools such as Jenkins to help save time by decreasing manual effort.

Is Ansible the same as Jenkins?

Does Jenkins use Ansible?

Ansible is often used in the Jenkins pipeline flow for reusing roles and Playbooks to provision target environments. This only leaves room for Jenkins to be the orchestrator instead of the executor for shell scripts.

What are some alternatives to Ansible?

Some of the top Ansible alternatives have been listed below:-

What are some Jenkins alternatives for developers?

Some of the best Jenkins alternatives have been listed below:-