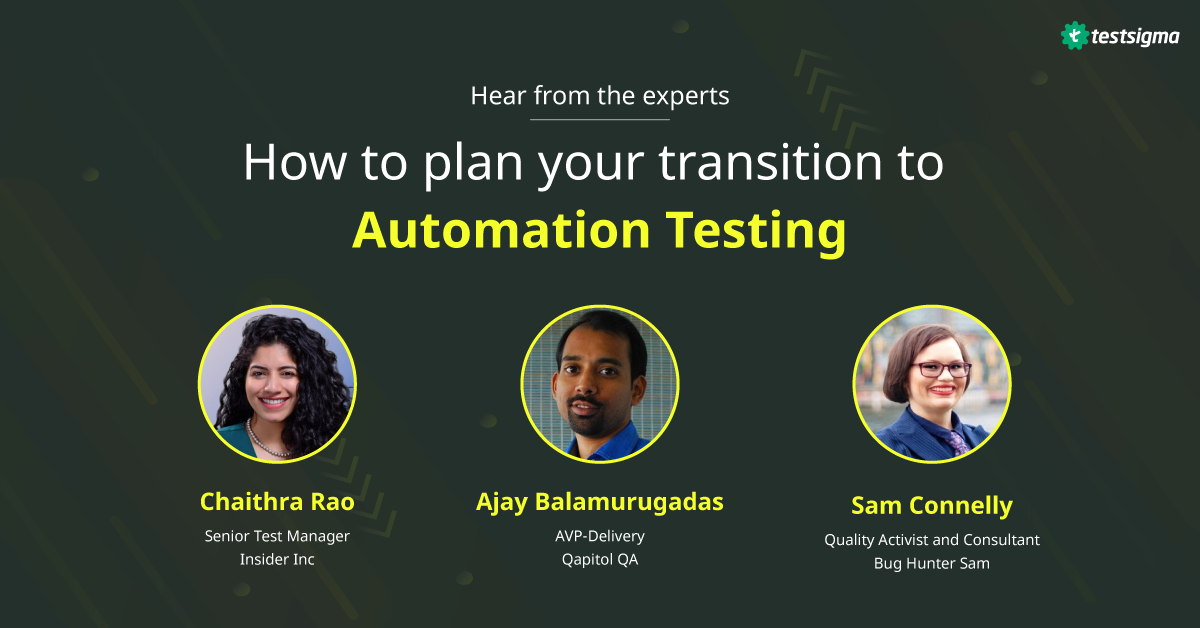 How To Plan Your Transition From Manual To Automation Testing

According to a survey conducted on software test automation, 51% of organisations prefer to retrain existing staff in test automation skills. While there are still 49% that would like to hire them specially for test automation related tasks.

Other findings from the same survey confirmed that organisations want to move to more of test automation and a minimum of manual testing.

And, 14% said they’d like to have no manual testing at all.”

Similarly, with the working conditions changing during pandemic, automation testing is something that has seen a huge jump.

Thus, it is clear that automated testing is the way to go for the software testing industry.

We asked some of the industry experts how they thought was the best way for a manual tester to transition to automation testing.

Let’s see what they had to say:

1. Chaithra Rao
(Chaithra is a Senior Manager of Test Engineering at Insider Inc.)

“I like to think of test automation as writing code with a tester’s mindset.

It’s not so much about a particular tool you use but choosing the one that best suits your needs, is simple to setup, use and maintain.

For someone who is just getting started with test automation, I would recommend learning the basics of programming first. Once you know the fundamentals, you could learn about the different test frameworks and design principles that’s out there. Understanding how and why the tests are setup is more important than just writing automated tests.

Once you have this knowledge, it’s easier to write tests. When you are first attempting to write an automated test, start with a simple assertion and then build upon it. There are several online resources to get help like Udemy, Test Automation University etc.”

“I think focusing on the manual to automation path is the wrong conversation. Technical skills are in demand, yes, but we don’t use manual/automation terms in any other profession. We don’t have manual doctors, lawyers or software developers.

Also, the tools and technologies are always changing. I think focusing on software engineering skills are a better return on investment.

The first skills I recommend improving for someone wanting to become more technical is git and the command line. Beyond that point, it really depends on what technology you want to learn. Understanding web protocols is also pretty useful.”

On her own website, Sam has compiled a testing career cheat sheet which we recommend you to go through.

A manual tester making a shift towards automation should:

“1. Understand the terms. Ask questions and /atleast/ know just enough to get started. Know what is method, function, loops, repo, principles, and basics of using the tools.

2. While you spend time learning the programming concepts and the language, use your testing skills to identify what to automate and what not to automate

3. Start with simple projects, shadow people working on automation projects and with enough interest, persistence and hard work, you will be able to make significant progress.”

At the same time understand that functional testing or automation, solving problems is the key. Both are needed in different contexts.

Let’s try to summarize and create some steps for you:

1. When you want to begin your automation journey, it means you want to start automation of your test cases. It is here, that comes to the big question – how are you going to automate those test cases?

The first logical step should be to know what tool you should choose to begin with automation. It will be an easy jumpstart with the tool you have heard most about. But the best way will be to research and analyse a few others. Here, we have compiled some points that will help you choose the right automation tool for you.

Testsigma is a cloud-based test automation tool that has all the features that will enable you to achieve insprint test automation easily and efficiently. To know more check the article here: Why Choose Testsigma as your Automation Testing Tool?

2. By the time you choose the tool for automation, you would be able to understand the basics of the tool and automation. If not, make sure you know the terms and main features of the tool that will help you begin.

3. In addition to learning the tool – try to also observe people who are already doing automation. That is if you have such people in your organization. If not, better is to have a training session about the tool.

4. Start automation with simple projects and simple test cases and then build-up to the complex ones.

5. Along the way, there would be some basic tools for eg. git and command line. Try to have a hang of them. This will help you transition into automation faster.

About tools, Ajay suggests, “I would like the testers to focus on the principle of

“Use tools where it helps you save time, effort and adds value”

Also, do not wait for the need to hunt tools. Be prepared by exploring different tools across categories so that when you actually need them, you are ready.

Finally, I have realized that having at least 3 tools for every category helps especially when one of the tools doesn’t serve your purpose.

Two good sites to be familiar with are alternativeto.net and alternative.to”

We have compiled a detailed blog on different types of tools that will help make the tester’s day-to-day life easier. Do check it out!

Even though you see yourself as an automation tester in the future, there are few things that you should always keep in mind:

1. Automation is an activity that should support testing but automation is not all. Sometimes you may want to automate some areas while you need to test some areas manually. Thus, you don’t have to focus on 100% automation but on quality automation. That means you should be careful to choose what to automate and take up automation with the aim of providing an ROI in future.

2. Even though automation tester might be a separate profile, there are some skills that it shares with manual testing which are: Inquisitive thinking, collaborating with the team and ensuring customer success.

3. Participate early on in the software development life cycle

4. Make sure to be well versed in the software development methodology being followed in your team. For e.g. Scrum or Kanban.

6. Keep yourself updated with new developments in the testing industry. This can be done by attending testing conferences, meetups, following influencers in the field and talking to people working in the same industry.

We hope these tips will help you make your transition to automation in testing a smooth and delightful one!