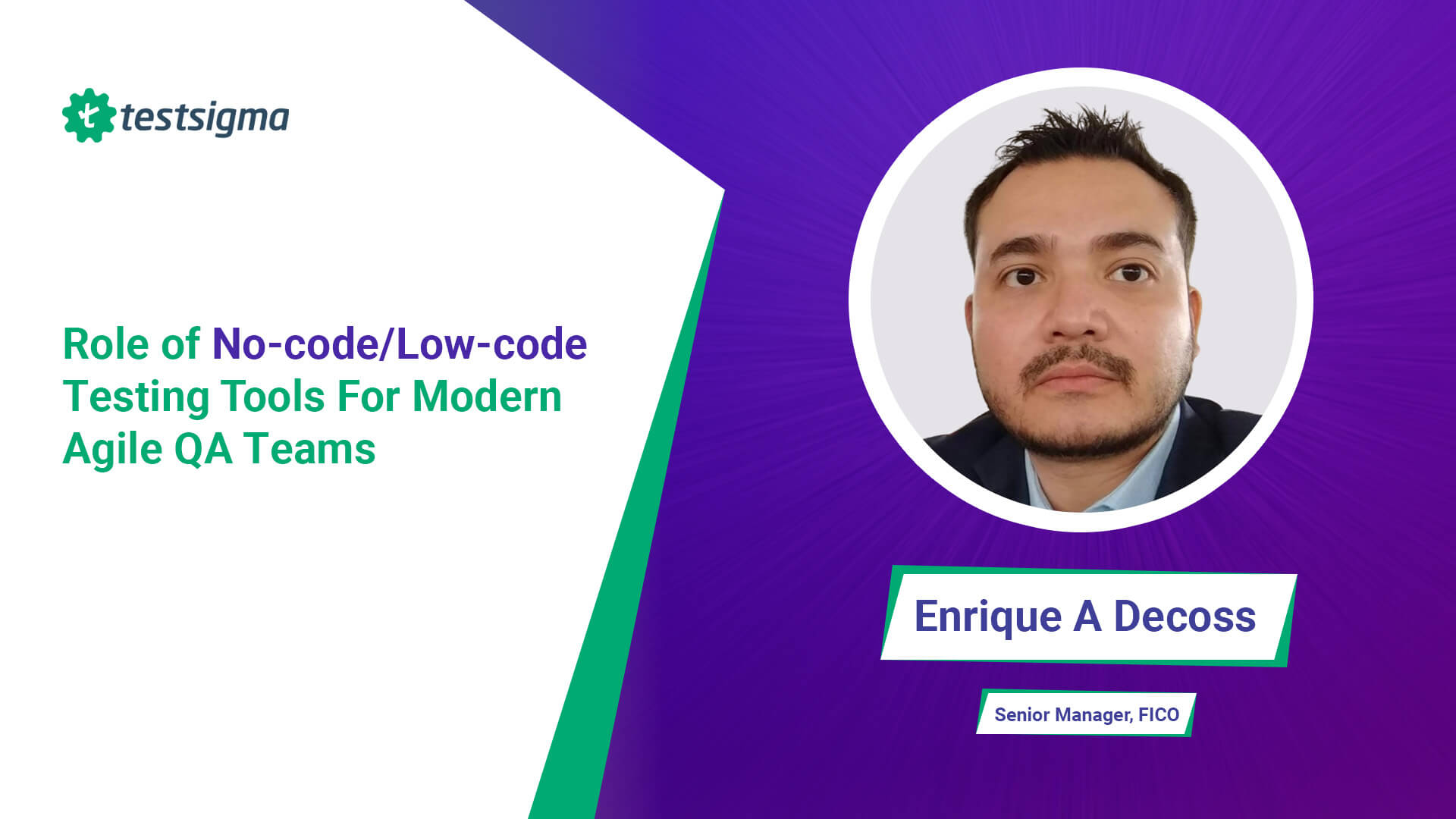 The world is entering a new age of technology. Low-code/no-code tools are already becoming a mainstay for many global teams. By going no-code/low-code, teams can now fill in the gap between the accelerating demands of application delivery and team skill sets. While these tools are nicely on their way to becoming mainstream for development, similar ones for test automation are pushing their way into the market.

No-code/low-code automation tools are believed to solve the challenge of simplifying Testing for Agile QA teams at different levels, plus handling the growing complexity of the software itself. In addition, the adoption of CI/CD and continuous testing practices in the Agile world has changed how product development teams deal with their updates in many ways: release more and release faster than before.

Therefore, test automation solutions today need to make testing accessible to those with a certain level of coding skills and those without coding skills.

Agile Testing and the challenge of going faster

Agile teams are constantly asked to do more with less and release faster without sacrificing the quality or increased spending. As a result, many Agile teams look to test automation to meet these demands from internal clients and end-users.

But, as we already know, traditional test automation comes with its fair share of challenges.

Agile Teams that have achieved higher levels of test automation encounter a much more diverse group of challenges. For example, companies that have invested heavily in Test Automation believe they progress too slowly, and do not notice the expected level of coverage from it.

The challenges appear to be inhibiting the effectiveness and adoption of Test Automation. According to Forrester’s State of Agile reports, the percentage of automated test cases is barely growing. In 2015, 49% of respondents communicated they always tested manually. That number dropped to 46% in the 2017 version of the report but hit a plateau in 2019, where it remained at 46%.

As we are aware, traditional automation requires experts in coding to script tests at the outset and maintain them over time. In addition, the complexity and need for different tools for automation like Appium, Selenium, element locator, locator strategies, and so on add to the complexity of traditional Test Automation and the need for specific expertise.

Some companies are misleading the QA teams and moving into development roles, which usually indicates that test automation projects get stuck midway through and are not fully completed, resulting in a massive waste of time, money, and people.

Using a no-code/low-code testing platform, we can significantly reduce the time and cost involved while also decreasing our dependence on test automation engineers. In addition, regular coders and even non-coders can now generate test scripts.

Finally, Testers can now focus on the business needs of the software, ensure customer-centric scenarios, and perhaps more test coverage.

Ideally, traditional automation and no-code/low-code testing tools should maximize the speed and quality of software delivered to end-users.

Technology is constantly changing, but at this moment, there are no tools to build software tests that perfectly run and identify bugs automatically with a single click. However, we can’t deny that it’s easier than ever to run automated software tests faster with no-code automation tools using advanced AI and ML techniques.

Agile Testing approaches that we need to include in our Scrum Teams:

Keeping UAT in sync with specifications is challenging in Agile projects where changes happen frequently. In addition, due to its heavy focus on end-user Testing, UAT also overlaps with UI testing, which tends to be less change-proof.

One of the critical advantages of no-code/low-code testing tools is the speed you can create and edit tests. In addition, the speed boost you get from not having to code your tests makes it possible to cover new features with tests quickly.

Exploratory Testing is a cyclical method, progressing from design > execution > analysis > learning before beginning the loop again. As we already know, Exploratory Testing can’t be automated; instead, Agile testers must create the exploratory testing session on the go, requiring the tester to use their unique skill set fully.

Exploratory Testing is the closest testers get to interact with an application. It’s a great way to find out if you have some working application quickly, and allow testers to identify bugs that would not be found through other testing methodologies. No-code/low-code testing tools can free up Agile tester’s time to perform Exploratory Testing sessions every sprint.

BDD is a collaborative approach that creates a shared understanding of requirements between the business and the Agile teams. Its purpose is to help guide development, reduce rework, and increase flow. BDD tests are customer-facing scenarios that try to describe the behavior of a Story, Feature, or Capability from a user’s perspective.

BDD facilitates the shift from functional Testing to automated Testing thanks to an understandable language that eliminates complex test script syntax (TDD).

Many no-code/low-code testing tools facilitate the BDD approach providing a Natural Language processor; if the test cases are created using Natural Language, they are understandable for users at all levels. Including Product Owners, TPMs, QA Managers, stakeholders, etc. It means any team member can look at the test cases and review them if needed.

In today’s Agile world, we can recognize teams who don’t want to use no-code/low-code automation tools and other groups willing to learn about those tools and apply them in their scrum teams.

A few years ago, I witnessed the same pattern between people who knew how to use Agile methodologies and those reluctant to switch from waterfall methodology (AgileFall).

The greatest thing that can be done to ensure the success of Agile Testing for an application is to hire people who have the essential characteristics of an Agile tester and build a culture of self-organization and independent thinking in the entire organization.

Members of an Agile team need to learn and adapt different technologies and business practices in today’s Agile world. In addition, they need to know new tools and skills to be more productive and successful.

Last but not least, modern Agile Teams need to embrace a quality mindset. Therefore, we need to maintain “Quality” as a core value and take real advantage of the no-code/low-code automation testing tools to deliver high-quality applications faster.

Enrique is an enthusiastic IT professional with 17+ years of experience in different IT domains, focusing on Quality Assurance (Automation, Performance, Functional) of web &amp; mobile applications. He has been working as QA Manager for the last years, mainly involved in building robust test automation solutions from the ground up and in Test strategies to improve software quality. Curious by nature about new techniques in Testing and Testing Tools. An active member of various Software Testing communities, Speaker, and a guest blogger on multiple platforms.