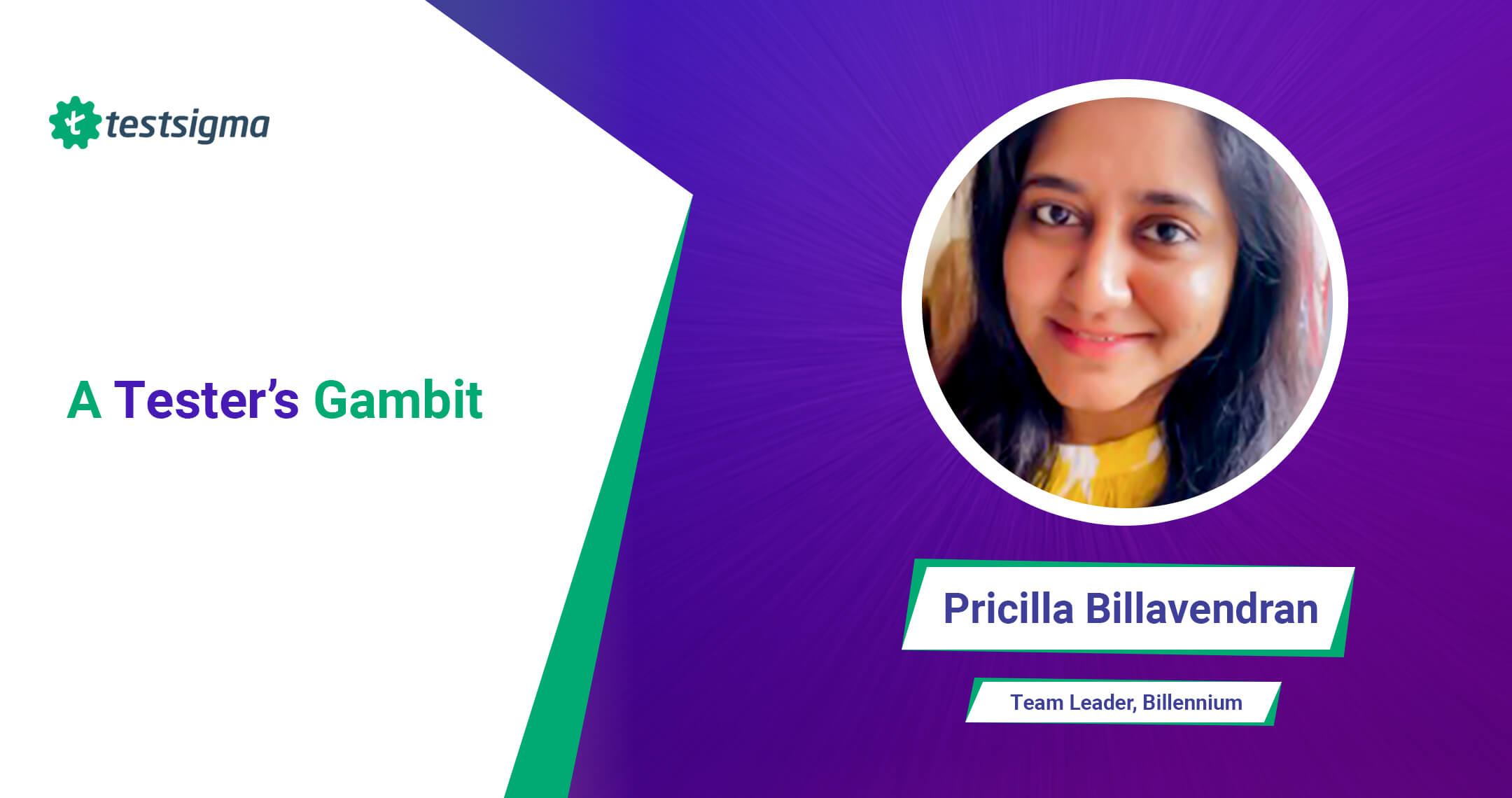 Great to meet you all with another interesting blog. There are many relationships between Games and Testing. Many people use that as a metaphor and define testing. Why is it so? Every game requires strategy and analytical skills to play and win. In today’s blog, I will be explaining how chess and the pieces in chess are related to software testers and what we learn from them.

Chess is one of the brilliant games. No one could deny it. But have you ever wondered that the chess pieces have a lot of similarities with the different roles that testers can have and our everyday life?

Yes, we are facing a lot of challenges every day and we take on new roles and responsibilities based on them. We need to act differently in different situations. We all know that life is a game, and we all are players here. So let’s see in detail each chess piece and what it symbolizes.

Sometimes, we should act as King to avoid conflicts in the team. There should be only one decision-maker and multiple ones will lead to chaos. Of course, getting multiple options and feedback from the team is the first step.

You need power, and authority to decide and everything in the project is revolving around you. This role helps you to make the right decisions, and guide and build the team better. Overall the King piece is advocating leadership that every tester of all levels should learn and implement. For instance, every Project/Test Manager should think and act like a king in most scenarios.

The Queen is the most powerful piece of all, with a lot of freedom provided she tends to save her King and the territory. She can move in any direction and take down anything that comes her way. She is aware of her strengths and weaknesses.

Also, I strongly believe that the QUEEN is a demonstration that implies that women are given more freedom since they are capable of handling it. Women are good at multitasking and delivering quality at the same time.

So this role, in the game of chess, is suitable for Testers who are given a lot of freedom in the project and in turn they deliver the best. They are aware of the granular level details of the projects. They use their power to fight for the team, and they use their smartness to handle and tackle the stakeholders. We testers should be fierce and utilize emancipation in a righter way.

Under certain circumstances, we need testers to behave smart as the Queen and make use of the freedom in a realistic and diligent way. Here comes the role of the Test Lead. I would say that a Test Lead should react and play the game with Queen’s attitude. This is helpful for the entire team to be led in the right way.

There are two bishops and they are close to the king and queen. They are considered the third most powerful pieces. Next to the King and Queen, they have the power and authority to make decisions. But they play the game the same way and same move.

Bishop is a highly respected and valued piece. Sometimes, we need to provide authority to someone and watch. This builds the team rapport and confidence in everyone and brings out the leadership in them. Delegating small chunks of work and asking our team to take responsibility, helps the team to grow and be productive.

Sometimes we have our senior associates in the team who possess a greater knowledge of the project and systems. Along with the power, experience helps a lot. So should try to gain real-time hands-on experience in the tools or projects we are being a part of.

The Knight is the only piece, that can skip or jump between pieces on the chessboard. They are happy-go-lucky and smarter ones. Other than Pawns, they have the power to start the game. It is on equal footing with Bishop and holds military ranking. Along with the power, you need strategic and pragmatic thinking.

A horse is used to denote and illustrate the Knight. It is an elegantly designed chessman. Just like the knight in a game of chess, testers should be versatile and clever. For instance, I can relate the Knight with some new joiners to the team with a few years of experience and knowledge in new tools/technologies.

They are energetic, vibrant, and enthusiastic. They are well aware of their roles and responsibilities. They needed a little mentorship initially and they can work smart and play the game and make unexpected magic happen.

They are strong, hefty, and powerful ones and the front-liners during the war. They provide support to the remaining pieces. They form a protective layer to the castle and that’s why even the piece designed represents the Castle with the turrets on top.

We as testers should be strong-headed and face the challenges. We should be defending our team. In every project, there will be a handful of techy, nerd people. They like to play around with the tools and make our work easier. They are super smart and will be ready to take on challenges at any time. I would say everyone in the project should act as a rook.

But they are more in numbers which make happen anything. We have to learn teamwork and humility from the pawns. Also, they showcase the traits like bravery and sacrifice. So never underestimate the presence and the strategy of the pawns.

I would relate this to the trainees in our team. If they receive proper guidance they thrive. We all need to understand their needs and should work together for the team’s success.

Every chess piece has a meaning and some elegant takeaway for us. These are different roles which I can relate to a few of our roles. Sometimes we need to play more than one role. I hope you will be able to relate the roles along with me. Lots of roles to play and act in a single day. That’s the life of a software tester.

To face the challenges or roadblocks we wear different hats every day. Just like this chess board and the chessmen we testers are juggling different roles and responsibilities.

Which one are you? Life is a long game. Of course, this is your game, and you need to play it your way. Please comment, let’s hear it out from you. Let’s celebrate each other!

Disclaimer: Inspired by the Queen’s Gambit series on Netflix and this is written based on Author’s sole views and opinions, not with an intention to hurt others.

Test Automation, is one of the major strategies and requires tools for implementation, read more about such tools for automation here:

Testsigma is a no-code test automation tool that lets you automate your tests for web,mobile and API from the same place, easily. It is also open source and free.

Read more about the features of Testsigma here: https://testsigma.com/