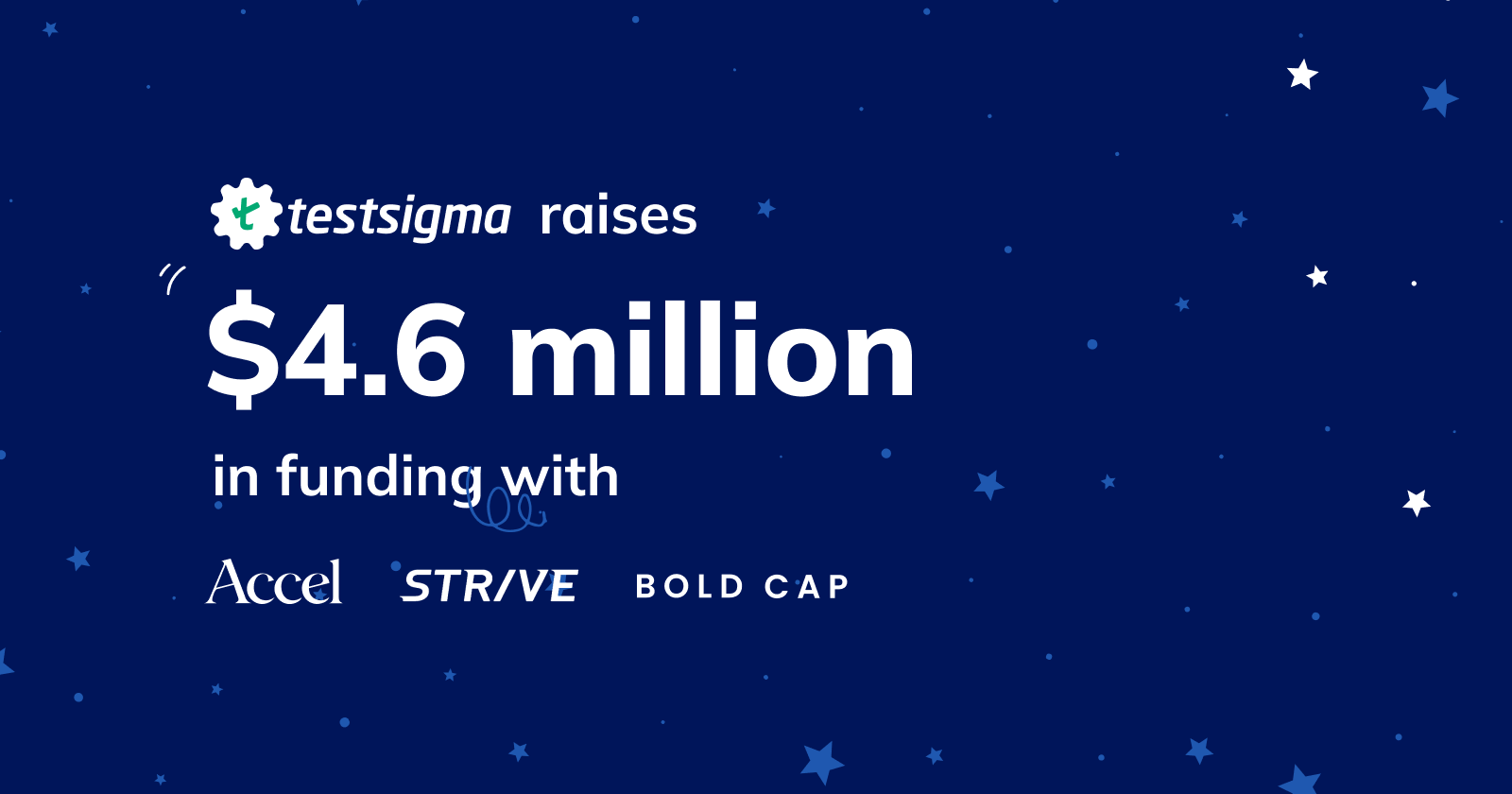 I’m happy to announce our financing of $4.6M  led by Accel and STRIVE, with participation from BoldCap and a host of well known entrepreneurs and operators 🎉

I’m grateful to the entire Testsigma team, our users, partners as we celebrate this huge milestone! And, I would like to welcome our investors to this exciting journey!

With an increasing focus on automation and DevOps, software delivery is faster than ever before! Automated testing is essential for balancing software quality with the accelerated velocity of release cycles, but because the toolchain that is supposed to enable automated testing has many moving parts, test automation becomes a parallel development project in organizations. Plus they have huge upfront and ongoing resource, tech, and expertise costs.

Today’s test stacks have made test automation more about writing and maintaining scripts than about taking quality software to market as quickly as possible.

What we’re trying to do at Testsigma is not just simplify test automation to speed up the testing, but also make it a sustainable, scalable process in which the tools and frameworks don’t require ongoing maintenance, freeing up the teams to focus on value delivery instead of building and maintaining scripts and frameworks.

Since our beta launch we have run 1.5M+ tests for hundreds of products, and on boarded 1000+ users, we are now we have got all the power to accelerate our growth.

We will use the capital to strengthen the core engineering and product team and to build alongside and for a global community of testers, test automation engineers, and developers.

I would like to take this opportunity to share with you our next steps, what we will be focusing on, our road map, and how we are thinning and shaping this platform.

The current test stack is broken & needs a fresh approach

In that time we’ve primarily seen two types of test automation approaches implemented, both being imperfect:

Most teams prefer building a custom test stack/framework because of the flexibility but there are significant drawbacks:

i. We realized that the modern test stack is fragmented. It has too many moving parts to be easy to set up and scale.

ii. Given there are so many use cases, languages and app types, test automation becomes overwhelmingly complex & time consuming to the point where it becomes its own development project.

Modern tools are simple to begin with but don’t scale for complex setups and constantly evolving applications.

It became clear to us that simple, no-code, AI powered solutions are vendor dependent in terms of flexibility required for scale, whereas custom built solutions require intensive complex dev and integration efforts to both build and maintain over time. As a consequence, almost two-thirds of all teams that automate their testing never see a return on their investment.

In a nutshell, the current test stack is complex, time consuming to build, and just doesn’t scale like you would want it to.

We want to change that by standardizing the fragmented test stack and coalescing it into an easy-to-use platform that combines the flexibility of open source test automation tools but with the ease of existing closed source low-code solutions.

We now know the problem lies with the lack of a common standard in the testing ecosystem. So how do we stop test automation from becoming a complex parallel development project?  When we set out to build Testsigma we laid out 3 core principles the platform should achieve:

What we’re trying to do is not just simplify test automation but bring sustainable scalability that can help users and teams actually do more testing rather than being caught up with building and maintaining scripts and frameworks.

To really solve for the broken test stack, we had to make sure our platform doesn’t limit users to specific use cases, programming languages, application types etc.

We decided to bring everything under one roof and built Testsigma as an open-source, low code platform that mimics what the modern Test automation workflow looks like.

Our platform works out-of-the-box. You don’t have to ‘set it up’ one framework, library, and tool at a time. You can simply install it and directly start automating tests for web apps, mobile apps, and APIs. This enables teams to shift focus towards scaling testing rather than maintaining the automation framework to support it.

We have seen that after teams automate a number of ‘standard’ tests, they struggle to scale because test scenarios increase in number and complexity while release cycles shortened. It’s no secret that test automation requirements are unique to every organization and constantly change  based on the product & what stage it is at. Test automation requirements can start out small and then grow rapidly.

We wanted to make scalability and extensibility something that was accessible and easy.

Also, we are an open source platform, you can dig deep and extend the core platform as you need.

In cross-functional development teams, everyone including Devs, QAs, PMs are responsible for the quality of releases. To balance quality with release velocity, we see teams adopting shift-left continuous testing.

We built Testsigma as a platform that everyone in the team could use to plan, develop, execute, and analyze tests, but the traditional ‘record-and-playback’ approach to to test development left a lot of room for flakiness and browser compatibility issues to creep in.

To create tests in Testsigma all you need to know is simple English. You can either write tests step by step, or generate them by recording real-time user scenarios and interactions that are auto-converted into editable tests.

Our objective is to collaboratively build a future-ready test automation platform, an ‘operating system for software quality’ alongside its most important stakeholders – the user, that decisively bridges the gap between development and testing.

In our journey so far, we’ve noticed that there is a misalignment across quality, teams and tools. There isn’t a tool in the market that involves every quality stakeholder, technical or not, in the building and integration of a test automation framework within the SDLC. We think that by open sourcing our platform, we can bring SDETs, Test Engineers, and Test Automation architects on the same page as QAs, PMs, and SMEs.

We open sourced Testsigma to achieve a few goals:

We will of course continue to invest time and resources into improving both the open source and cloud version of our product but it’s the contribution of the community that will make Testsigma the universal standard in test automation.