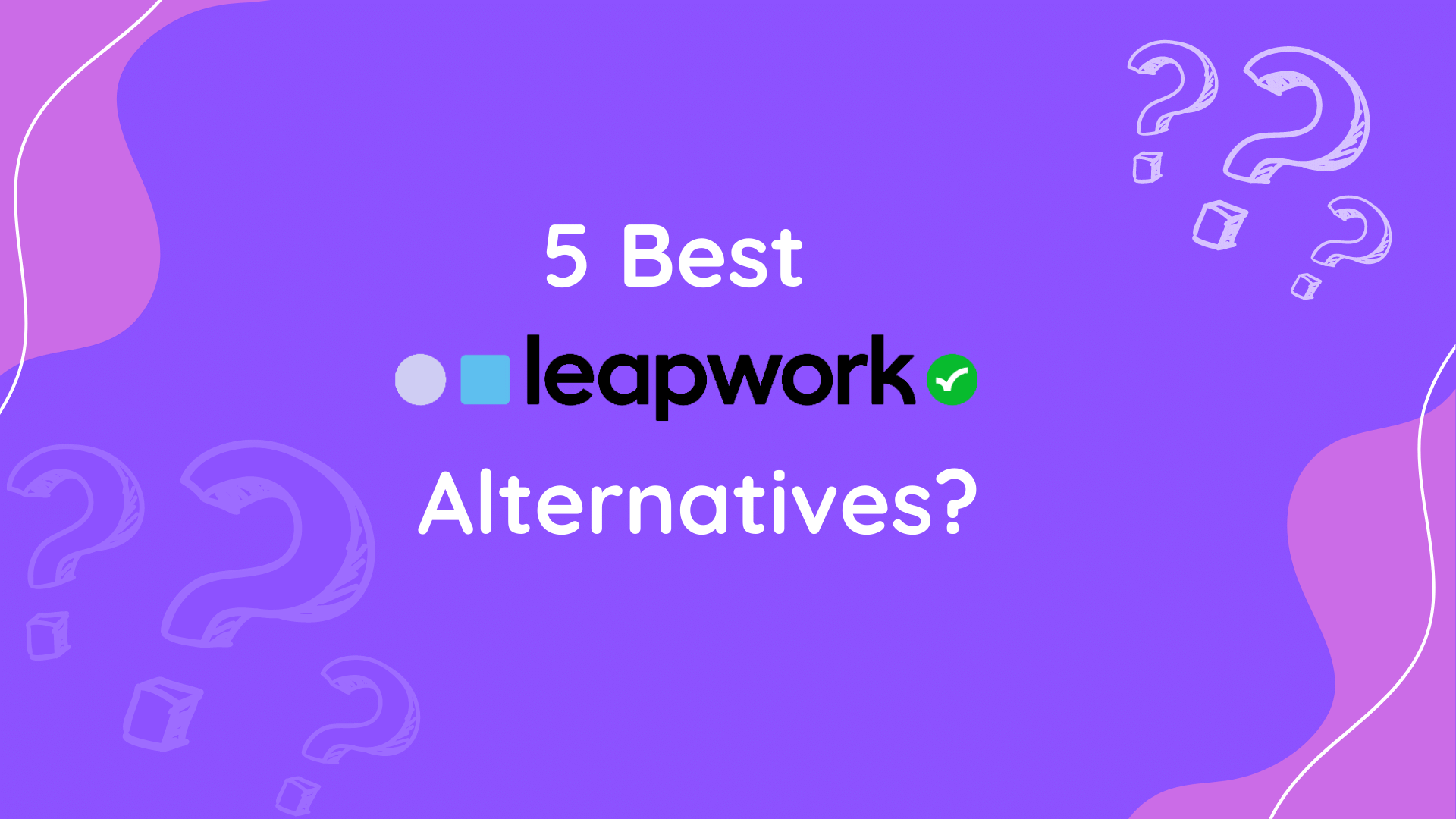 Test automation tools like Leapwork help your business focus on delivery, end-user experience, and innovation while reducing dependency on the developer. Today we’ll be reviewing these best-rated test automation tools that are just as good, if not better than Leapwork for your testing needs.

You can create, execute and run all types of functional and non-functional tests for your IT enterprise with their help. Let’s start, shall we?

Why Do People Choose Leapwork?

Leapwork is a test automation tool that boosts productivity, cuts costs, and increases the earning potential for IT companies and businesses.  It simplifies UI testing, regression testing, end-to-end testing, Salesforce, Dynamics 365, etc, with a code-free approach. Here’s the real reason why people use Leapwork!

Leapwork helps to run mobile and web automation tests without a coding language. It’s helpful for new IT users who are still figuring out the ins and outs of test automation. Leapwork allows your QA team to design, build, and maintain automated tests for an app with popular browsers, devices, and operating systems.

Software testing is no fun, especially when you have to do an extensive one for apps and websites. Leapwork not only makes mobile testing easier but also looks over business paths to reduce workload.

Instead of a code-based approach, Leapwork automation platform provides a visual, intuitive layout that manages multiple tests in your version control system.

What we like about Leapwork is how it orchestrates different automation setups based on your niche. That’s right— Leapwork has six project templates, namely retail and ecommerce, banking and financial services, logistics and transportation, healthcare and life sciences, telecoms, and manufacturing.

Leapwork provides templates for all types of industries. The dashboard, audit logs, and business integrations definitely help scale your business.

Is Leapwork Still Relevant in 2022?

Ever since its launch in 2015, people have liked this test automation solution for many reasons. You can run tests and put forward your own app or e-commerce website without big-budget SDET team to do your test automation.

We can’t deny that Leapwork is indeed a handy testing platform— that too of the open-source kind. It gives entrepreneurs and startups a leg up in the IT world. But unfortunately, it has very limited resources.

For one, the desktop application flows are particularly slow. And when you have multiple secondary flows, the debugging feature takes forever to identify the block. Feeding it large scripts and sequences can backfire quickly, which makes it unsuitable for end-to-end testing.

Finding a good alternative to Leapwork shouldn’t take more than a minute, given the saturated market. However, most tools that we came across lacked three important things—

That’s when we decided to launch an automation platform of our own that goes by Testsigma.

If you’re having trouble with web, mobile, or API automation tests, you’ll like Testsigma for a number of reasons. First off, it’s a robust automation platform that easily integrates into your CI workflows in your enterprise.

Testsigma is an open source software — the same as Leapwork. It’s fully customizable and builds end-to-end tests 5 times faster for all your mobile apps, web apps, and APIs. It uses self-healing English scripts and doesn’t require software developers at the helm.

Testsigma vs Leapwork: Which One Is Better?

Considering test coverage, cross browser testing, integrations, and other factors, Testsigma is much better than Leapwork.

Testsigma can manage volumes of necessary test components, especially when it comes to smoke and sanity tests. It simplifies testing procedures that would otherwise require extensive hardcoding. Our main priority was to offer technical help, keeping the end-to-end scripting, testing, and reporting process as easy as possible.

We created Testsigma to fast-track collaborative design and development of tests for IT businesses. It’s an enterprise-ready all-in-one test automation platform that you can easily run and manage.

You should use this test automation tool if —

As a close alternative to Leapwork, BrowserStack is made exclusively for app and browser testing. It’s a more concentrated automation platform for app developers, yet it runs over two million tests globally in a single day!

On BrowserStack, you can do—

Currently, this platform can test compatibility across three thousand devices and browsers.

This robust automation solution recently launched visual UI testing.  It allows you to check whether the interface of your app lines up with the script and appears uniform to all users.

BrowserStack vs Leapwork: Which one makes the cut?

We wouldn’t call BrowserStack to be a perfect substitute for Leapwork since it’s essentially a cloud-based device lab for your test execution. It’s one of the top alternatives if you run this particular test more than the others.

The features of BrowserStack are easy to follow. After a certain point, it gets difficult to provide smooth and timely services with Leapwork for a large business. BrowserStack can leverage its simple cloud-based features and come out as a faster tool.

BrowserStack has the upper hand. Apart from automated, and visual testing, it can initiate local testing and comprehensively test the fastest path for work-in-progress applications (WIP).

On BrowserStack, you can instantly test your app’s compatibility with different browsers across a wide range of Android and iOS devices.

You can run interactive testing on the Cloud, using more than 15 native features to replicate real-life user experiences. It can stage accurate test environments, make real-time crash reports, and help debug your app.

It is perfect for you if—

This platform is based on three Ts — transparency, traceability, and test coverage. It will help you increase test coverage and generate real-time bug reports in the build stage. TestRail allows you to bring automated and manual test reports together on the same screen.

TestRail vs Leapwork: What’s the Difference?

If you’re new to Information Technology, then you can consider Leapwork as an elementary testing tool. Leapwork is aimed at improving user experience by running tests, organizing operations, and debugging digital services.

TestRail, on the other hand, provides advanced controls, countless built-in plugins, and scalability. It’s best for you if you already use a bunch of test automation frameworks, DevOps pipelines, and defect finders.

TestRail is a robust automation solution for seasoned IT users. It is a quality software with a wide selection of project templates and test elements. You’ll be able to track the testing progress soon after the test creation. So, if you’re looking for an efficient way to manage test repositories, TestRail will be among the suitable Leapwork alternatives for you!

This app is worth a try if —

Be it parallel testing, smoke testing, or usability testing, Katalon here is an all-round software testing tool for no-coders. If you’re a non-programmer yourself, you’ll like this test automation platform better than Leapwork.

Katalon Studio vs Leapwork: How Is It Different?

One of the perks of using Katalon is — you now have awesome test coverage and comprehensive test reporting. Automated test cases with a graphical user interface make the coolest automation framework, after all.

You can also find real-time insights, which will help you navigate Katalon with more grip. All the tests here are configurable by a non-technical person.

Leapwork has a slightly complicated automation suite; that too, with limited add-ons and basic parameterized testing. It’s not all-out user-friendly, nor does it charge the users with a flat rate.

This AI-driven automated testing suite was a delight to use. It’s free of the delivery bottlenecks in Leapwork, and has become our go-to testing platform for building tests without complicated setups.

The starting price of Katalon Enterprise is only $158 a month, and the basic plan is absolutely free.  So, imagine our surprise when we realized how affordable Katalon is!

This will be a good alternative to Leapwork if—

This is your one-stop test automation tool for robust GUI tests, functional tests, and all sorts of mobile application solutions, developed by SmartBear Softwares. TestComplete offers built-in keywords and reusable tests that you can use throughout the build phase.

Much like TestSigma, it supports all popular integrations— Git, Jira, Jenkins, Azure DevOps, Selenium, TeamCity, Zephyr, and many more.

TestComplete vs Leapwork: How do they compare?

Running as simple as an ad-hoc test can fire up your HDD and crash the Leapwork. It sure makes sense for small enterprises. But if you want a fast, bug-free, and scalable automation platform, you have to look at the alternatives.

Speaking of, TestComplete is a great choice for performing automated functional tests without a serious skill level. You can be a beginner, or you can have decent coding experience, TestComplete works for everyone.

On TestComplete, you have the option to script with either modern languages or a code-free suite. It also has similar out-of-the-box testing features as Leapwork, which we liked.

It makes web automation tests simple and straightforward. For example, it includes flexible testing tools that can run functional and non-functional tests rapidly.

Top Alternative to Leapwork: the Results

While Leapwork is a great testing tool, it can take a lot of getting used to. That’s why it’s worth trying a few Leapwork automation platform alternatives.

As for the top Leapwork alternatives, we hope the list above helped you along your search. We are obviously biased towards Testsigma, but Katalon and TestComplete shouldn’t be written off your list either.